The largest conventional hydro scheme constructed in the UK since 1963 - the 3.5MW Kingairloch project - has just been completed. Neil Sandilands reports 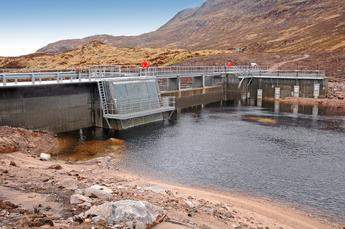 Scottish and Southern Energy’s (SSE) 3.5MW Kingairloch hydro scheme in Morvern has just been completed. It is a small hydroelectric development with an average annual output of just 14.5GWh, but is an important part of SSE’s major renewables investment. SSE is the largest generator of renewable energy in the UK with an average annual output of around 3200GWh from existing hydro. Despite its small size, the scheme is the largest conventional hydro scheme constructed in the UK since 1963 and the first since then with a storage reservoir.

Development of the scheme commenced in 2000 and ASH Consultants were appointed to prepare an environmental statement. The site presented a wide range of environmental issues, including:

• Landscape and visual impacts: These were a major consideration because of the high quality of the landscape. They influenced the alignment of the pipelines and diverted public road, the siting of wood poles on the overhead line connection and the design of the power station building.

• Protected species: A number of protected species were identified in the general area of the scheme, for which detailed habitat studies were required.

• Archaeology: An archaeological survey was carried out which identified a number of features and one major site. As a consequence of this the high pressure pipeline from the Ghardail Intake was re-routed.

• Fisheries issues: The Abhainn na Coinnich had been a fishing river in the past, but fish surveys found that migratory fish were not present at all in the loch and were present only in very low numbers in the river. Despite this the scheme incorporates a fishpass in the new dam and provision will be made to install smolt screens should sea trout ever return to the reservoir. Compensation flow arrangements include provision for freshets at times best suited to support movement of migratory fish. Natural spill events of sufficient size and duration will be deemed to constitute freshets.

The development of the scheme concept was based on using the existing reservoir at Loch Uisge and raising it by 3m. The new reservoir’s capacity is approximately 700,000m3. This gives storage of 1.4% of annual runoff and allows three days generation at full load with no inflow. The reservoir gives considerable benefits in greater flexibility, the ability to maintain compensation flows through dry spells and easier control and greater efficiency of the turbine, which will run at a fixed load of 3.5MW. The reservoir improves water utilisation by around 20%. The main source of water for the reservoir is the Abhainn na Coinnich. To maximise output a series of minor intakes and aqueducts have been constructed to transfer water from three downstream tributaries; the Abhainn Ghardail, the Allt Choire Shalachain and the Cam Alltan. This has resulted in a 51% increase in the catchment area. Application for Consent for the scheme under the Electricity Act was made to the Scottish Executive in spring 2002 and consent was granted in March 2003.

The tender process was based on the appointment of a single main contractor with full design responsibility and a two stage tender process was adopted using the NEC ECC Option A form of contract. The process started in spring 2002 and a shortlist of tenders was selected from this stage to submit tender designs for stage 2.

Tender evaluation was completed in spring of 2003 and Amalgamated Construction (AMCO) was appointed as main contractor for the project. AMCO’s project team included:

In developing the design AMCO had the following objectives:

• Maximisation of the catchment area.

From previous experience both SSE and AMCO were aware that one of the most important functions in meeting the project deliverables was the design integration between the separate plant disciplines and the civil construction. For this reason AMCO elected to carry out this role in house and thus retain control of the process.

By the summer of 2003 scheme design was well underway. Design was carried out at fifteen separate locations in eight different countries. Over 800 drawings, specifications, design statements and other documents were produced during the project. To control this spread and volume of information, a bespoke document management system was developed. This proved to be an invaluable tool which greatly enhanced the concurrent engineering processes.

The power station is located on the river just over 3km downstream of the reservoir. The gross head is 143m. An intake structure is incorporated in the dam and 3300m of 1200mm diameter buried GRP pipeline connects the intake to the power station. The diversion of the indirect catchment necessitated constructing a second, 1100m long 900mm GRP pipeline, over 2000m of aqueducts and seven minor intake structures.

The generation plant consists of a Francis turbine, synchronous induction generator, high voltage switchgear, transformers and grid connection. Due to the fact that there are two high-pressure intakes the flow control is governed by the output power reference not the net head. The scheme water to wire efficiency (including the penstock) is 83%, which is some 4% better than the concept calculations.

The scheme is designed to be left unattended in normal operation and requires routine maintenance visits only. Operation of the generation plant is completely automatic, but remains under the control of a remote Generation Control Room at Perth. This is achieved by a sophisticated control and SCADA system. This system has been developed and tested to ensure that it has sufficient robustness to meet the stringent availability requirements of the scheme without compromising the integrity of the plant.

The penstock was by far the largest part of the civil works. GRP pipelines result in a considerable cost saving compared to steel pipelines, but great care was required in the alignment of the push fit joints which must comply with the manufacturer’s prescribed tolerances in order to sustain the design pressures. Particular attention needed to be paid on steep slopes to ensure that the pipeline sections are stable and joints will not move. The arrangements for testing of the penstock also required careful design to ensure that test ends are capable of sustaining the applied loads and that the lengths tested allow any defects to be located relatively easily. Once completed the GRP pipeline offers a long period of maintenance free operation.

The dam is a 6m high concrete gravity structure 100m long incorporating the intake in the left abutment and fish pass structure in the right abutment. The spillway takes the form of precast concrete ogee units fixed to a reinforced concrete cast in situ wall. 1.6 km of the B8043 adjacent to the new reservoir was diverted because the existing road was inundated by the reservoir. This provides a major improvement to the local road network and greatly reduces the risk of flooding which was a frequent occurrence on the old road.

The power station is a conventional steel framed building which has been designed to match features of local estate buildings, including a pitched slate roof and white roughcast walls.

The plant can be separated into four distinct types of equipment:

• Catchment – to control the scheme hydraulics, in layman’s terms the capturing and movement of water.

• Generation – to convert the water power into electricity.

• Distribution – to connect the electricity to the transmission network (Grid).

• Control – to monitor, protect, control and integrate the catchment, generation and distribution plant.

The catchment plant consists of 24 gates, three valves and eight screens sited at the dam and intakes. There are two intakes that allow water to enter the penstock, one at the dam and one at the Abhainn Ghardail, and six other (minor intakes) that direct water via aqueducts into the catchment area. Each intake is isolated by a manually operated penstock gate and protected by bar screens designed to stop large stones and debris passing into the turbine. The bar spacing of the penstock screens is critical; too large a spacing creates the risk of stones damaging the runner and guide vanes, whilst too small a spacing will increase the head loss across the screen.

In the end a combination of computations and past experience resulted in the dam screen being sized at 25mm spacing and the Abhainn Ghardail at 12.5mm spacing. The bar spacing of the screens fitted at the six other intakes is not as critical, therefore they have a bar spacing of 43mm. Each intake is also fitted with a manually operated scour gate. Six further gates are fitted at the dam fishpass; these are actuator driven via the control system. Three valves are fitted at the dam; one (actuator driven) is used to fill and isolate the penstock; one (actuator driven) is used to control the compensation flow and the last (manually operated) is used for scouring.

The generation plant consists of a horizontal Francis turbine manufactured by Voith Siemens ESAC and 1000rpm synchronous generator, complete with flywheel, manufactured by Leroy Somer. The generator is water cooled by a closed loop system with
the heat exchange submerged in the tailrace. This cooling system has proven to be so reliable that it is being retrofitted to other existing hydro schemes.

A hydraulic power unit, operating at 100 bar, is used to control the turbine inlet valve and guide vanes. The generator bearings are lubricated by a closed loop oil system, with the oil temperature being regulated from the same cooling system as the generator.

The distribution plant consists of two transformers (grid and auxiliary), 33kV and 11kV switchgear. For integration and standardisation purposes the same manufacturer (Areva T&D) was selected for all the equipment.

Whilst representing only a small percentage of the scheme capital cost, the control system is of particular importance to the success of the project. Experience on other schemes indicated that the control system manufacturer should be independent of the generation and distribution plant manufacturers. Experience also showed that the scheme functionality should be defined, agreed by all parties and fully documented early in the project lifecycle. This resulted in the project FDS being created within the first few weeks of the scheme; this evolving document proved to be an invaluable tool in the delivery of what has proven to be a robust and successful system. Another first in hydro control systems was the introduction of integrated FAT’S (Factory Acceptance Tests); the seven individual communications networks were all tested off site. This allowed the system development to be proven, which reduced the on site commissioning time by over 40%.