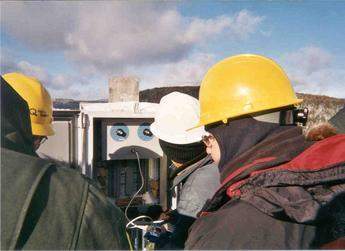 roctest of Montréal assisted the utility’s dam safety engineers in defining and installing a suite of instruments that, taken together, monitor all project phases from initial blasting operations through settlement observation in future years. Applied Geomechanics Inc. (AGI) of Santa Cruz, California, US, provided the Model 802-S DeepWater tiltmeters, a submersible version of the standard Model 801-S Tuff Tilt. These measure angular movements within a range of ±3 degrees with a resolution of 0.0006 degree (10.5 µradians) and repeatability of 0.001 degree.

Roctest’s involvement with the Toulnustouc hydroelectric development began in the earliest stages of project design in September 2001. Similarly to its previous work for the utility, Roctest consulted with Hydro-Québec’s appointed engineering firms in choosing geotechnical instrument systems for the 77m high dam, south dike, intake and headrace tunnels, and the 526MW power plant. The main concern was measuring settlement of the dam. At first, an inclinometer system and settlement cells were discussed. However, the inclinometer solution was deemed impracticable given the 37.5 degree slope of the concrete face of the dam and south dike. The use of soil settlement cells was also rejected because hydraulic tubing could be damaged by the coarse aggregates.

Most of the dam settlement will occur during the first three years, but monitoring must continue to produce reliable data for a much longer period. With the collaboration of tiltmeter specialists Applied Geomechanics, Roctest proposed to install submersible tiltmeters along two cross-sectional lines on each structure (dam and south dike). This approach enables reliable long-term monitoring of slab deflection, which is caused by the dominant hydrostatic load moving the concrete face gradually in the downstream direction.

Each instrument had to withstand a maximum of 75m head of water and be sufficiently accurate to measure small deformations (mm scale). Also, the tiltmeters needed to be rugged enough to resist severe weather conditions (before reservoir filling) and impacts from debris. Therefore, a special 6mm thick stainless steel enclosure with marine connectors was designed and built by AGI. Roctest’s laboratory performed the acceptance testing by reproducing conditions to which the instruments would be exposed before, during, and after reservoir filling:

• During construction – temperature change, not submerged.

• During reservoir filling – both temperature and pressure change.

• After filling – temperature and pressure constant.

Each unit was subjected to intensive laboratory testing to confirm temperature coefficient, waterproofing, and tilt calibration.

Between October 2004 and January 2005, Roctest’s field engineering staff installed a total of 24 Model 802-S tiltmeters with mounting platforms on the concrete slabs. Cables were inserted into galvanised conduit manifolds extending to terminal switching boxes located at the crest of the dam and south dike. Each terminal switching box had overvoltage protection and proper grounding. Special galvanised steel covers were fitted later over each tiltmeter for additional protection, after ice accumulation and small avalanches damaged connectors during January-February 2005. The few damaged tiltmeters were brought back to Roctest’s facility and were repaired, subjected to the same testing regimen, and reinstalled.

Hydro-Québec data monitoring indicates that all of the DeepWater tiltmeters are performing to specification and that structural movement remains within the defined parameters. (The data themselves are proprietary to the utility.)

Instrumentation installed during power house excavation and for construction of the intake and headrace tunnels included extensometers, piezometers, load cells, and fissurometers. Roctest instrumented the impermeable concrete face – a ‘mask’ 0.3m thick – of the dam and south dike with fissurometer and strong motion accelerometer stations as well as the 24 submersible tiltmeters.

Roctest supplied and installed a total of 42 fissurometer points (Model PF-25 Jointmeter) for monitoring displacement of each slab’s construction joints. To measure P and S waves generated by earthquakes, two strong motion network systems from Syscom (Model MS2004+/MR-2002 & NCC) were situated a) on the crest and b) on the abutment of the main dam. Additionally, Roctest installed 24 vibrating wire piezometers (Model CL-1) for measuring interstitial water pressure variation along the headrace tunnel; and three convergence meters (Model COR-P) were customised and installed to measure tunnel closure.

In recent years, engineering tiltmeters have increasingly been specified as components of sophisticated monitoring systems for larger projects. Among these are Russell dam near Auburn, Georgia; Coolidge dam near Phoenix, Arizona; Hoover dam near Las Vegas, Nevada; and Boundary dam in northeastern Washington State, US.

Electrolytic tiltmeters sense angular movement using transducers and electronic signal conditioning. They can be described as very precise electronic spirit levels. They operate on the principle that a bubble, suspended in a liquid-filled case, tends to remain stationary with respect to the vertical gravity vector. As the instrument tilts, the case moves around the bubble. Platinum electrodes sense changes of resistance as they are alternatively covered or uncovered by the conductive liquid. Highly stable circuitry inside the tiltmeter body converts these changes to high-level voltage signals linearly proportional to angular rotation.

The most advanced AGI biaxial tiltmeters – with sensors on two axes aligned on two orthogonal planes – can measure angular changes smaller than 0.1 µradian with repeatability of 1 µradian. To visualise a µradian, imagine a rigid horizontal beam that is 1km long. Lifting one end of the beam by 1mm tilts it by an angle of 1 µradian. Wide-angle tiltmeters, used to measure the angular position of radial dam gates and other machinery, are also available and have ranges up to ±80 degrees.

Because they are gravity-referenced, AGI tiltmeters can be installed anywhere without the need for shafts, linkages, or other complicated and expensive fixturing. They include full signal conditioning and will drive long cable lengths (>1000m).

Geotechnical data from Toulnustouc dam are being acquired manually using handheld readout units; only the strong motion recorders are automated at the present time. But in many installations AGI tiltmeters have been hard-wired to an automated data acquisition system. Individual tiltmeters and multi-instrument arrays also can be configured to communicate directly with the project’s site computer using wireless Ethernet (Wi-Fi) links. A variation of this type of wireless service is ‘drive by’ data collection. In a ‘drive by’ system the wireless tiltmeters communicate with local Ethernet hubs. These hubs can be accessed by radio from any location within 100m, enabling an engineering technician to connect wirelessly, query and download data, and then move immediately to the next instrumented structure. The ‘drive by’ approach can increase reliability and lower power consumption when tiltmeters and other instruments are spread out over large distances.

Appropriate to AGI’s catchphrase, ‘Did it move, or didn’t it?’, the Toulnustouc dam tiltmeter system has been designed to assure that natural structural settlement over time remains within Hydro-Québec’s engineered safety parameters. Roctest continues to consult with Hydro-Québec engineers on the dam’s geotechnical instrumentation.

For reviewing the article draft and providing numerous helpful comments, the authors would like to think Christian Garneau, Safety Engineer, Dams and Environment, Hydro-Québec, Montréal, QC (CAN), Garneau.Christian@hydro.qc.ca