Rehabilitation work, including the installation of a new monitoring system, was carried out at Moravka dam in the Czech Republic after flooding caused structural damage 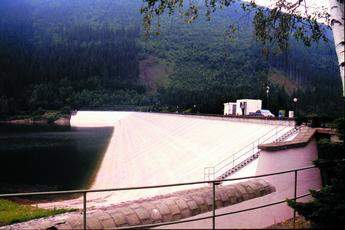 MORAVKA dam was built as a potable water supply for the Ostrava region in North East Moravia, Czech Republic, between 1961 and 1967. The dam was constructed in the Beskydy mountains on the Moravka river in the Odra river watershed, and is owned by Povodi Odry State Enterprise.

The dam is 39m high and 395m long at the crest. It is of rockfill type with bituminous concrete sealing on its upstream face and the bedrock is sealed with a cement grout curtain, installed from the grout gallery. The total volume of the dam is 12.2Mm3.

After floods in 1996, part of Moravka dam’s bituminous concrete sealing was damaged, and a 4 x 6m hole appeared on the upstream face. The hole was repaired with reinforced concrete and supported by grout. The dam went on to survive another flood in 1997, but after that the dam owner decided that a major reconstruction of the dam body and surroundings was needed.

Reconstruction of Moravka dam took place from November 1997 to June 2000, and included the following:

• Reconstruction of the old grouting curtain along the whole grouting gallery.

After good experience at the Slezska Harta dam (completed 1997) in the same watershed, the dam owner and project designer decided to use the same monitoring instruments again at Moravka.

Geokon vibrating wire piezometers were selected for use at Slezska Harta. They are designed to be read over long cables, without loss, or degradation of the signal, and can be datalogged easily. The data acquisition system at Slezska Harta comprised of the Geokon Micro-10 Datalogger and Multiplexers. This is considered to be a powerful and versatile instrument capable of reading practically all types of electrical sensors including vibrating wire transducers and thermistors. Data is retrieved by telephone modems, short haul modems, radios, or satellite transmission.

A system of 64 monitoring boreholes was drilled in the grouting gallery of Moravka dam. Boreholes were drilled on both the upstream side and downstream side of the grout curtain. All boreholes were of different inclination and length. They were equipped with 2.5cm PVC pipes with a 3m long slotted screen at the bottom. Measuring the water level with the piezometers ensured that the grout curtain was functioning properly. An additional 22 standpipe piezometers were placed on the downstream face and around the dam body. Water levels in all boreholes are measured with submerged Geokon Model 4500S vibrating wire piezometers which are supplied complete with thermistors to allow for measurement of temperature changes in the groundwater. Normally the temperature of the groundwater is different from the temperature of the water in the reservoir. If there is any significant leakage through the upstream face sealing, it can be detected early as a change in the water temperature.

Three inclinometers were installed to check the left slope and dam body stability. The inclinometers consisted of conventional grooved casings and Geokon’s Model 6000 servo-accelerometer based inclinometer probe with GK-603 electronic readout. Dam body stability was also monitored with two rod-type extensometers grouted into 30m deep boreholes, at an angle of 30°, at the downstream toe. Geokon Model 4450 Vibrating Wire Displacement Transducers were used for the extensometer measurements.

All 64 piezometers from the grouting gallery, one compensation barometer, 17 piezometers from the downstream face and surrounding dam body, and two extensometers are connected to an automatic data acquisition system which comprises of six strategically placed Multiplexers (automatic switch boxes) and one Micro-10 Datalogger.

Data from the datalogger is automatically transferred via short haul modem to the office in the control room where it is interpreted with a computer to provide current data, historical data, graphs, and charts. It is also able to activate alarms if data exceeds pre-set thresholds. The five piezometers surrounding the dam body are measured as stand-alone boreholes with Geokon’s LC-1 single channel dataloggers.

The precise measurement of the new monitoring system helped to verify the performance of the dam during the first filling, which took place over a very short time – only 57 days.

The authors are Ing. Ludek Novosad of G4C and Tony Simmonds of Geokon, Inc