MHI-Vestas V164 steps up a gear

A 9.5 MW version of the record- breaking V164 wind turbine generator has been unveiled. 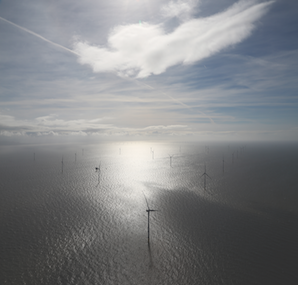 On 6 June MHI Vestas officially launched the upgraded version of its V164 offshore wind turbine. The company announced that the new 9.5 MW platform is available now and signals its ‘relentless drive to lower the cost of energy for offshore wind’.

The V164-9.5 MW unit will be the world’s most powerful serially-produced wind turbine and was unveiled at the Offshore Wind Energy 2017 conference in London. The upgrade was achieved with ‘only minimal design changes’, said Torben Hvid Larsen, chief technology officer at MHI Vestas. These changes include a redesigned gearbox, cooling system upgrades and improvements to the power electronics.

These are busy times for the V164 platform. It is already operating in the UK at the 258 MW Burbo Bank Extension offshore wind farm, located 7 km off the northwest coast of England, and fully commissioned earlier this year.

The V164-9.5 MW, as the most powerful wind turbine generator in commercial serial production, benefits from the legacy of the

successful V164 platform. In its 8 and 9.5 MW versions, with its three 80m, 35 tonne blades situated at a hub height of 105 m (140 m for the Østerild prototype) it is also the largest. In December last year it achieved a production world record for a single wind turbine – 216 MWh in a 24-hour period.

Success of the V164 platform

In April MHI Vestas officially opened the Burbo Bank Extension windfarm, where 32 of is 8 MW machines are in operation. MHI Vestas is looking at a pipeline of a further 2004 MW in firm orders for arrays using this machine, all to be commissioned between 2017 and 2019.

For Burbo Bank Extension the turbine blades were designed, tested and manufactured at the company’s blade factory on the Isle of Wight and are the first locally built blades to be installed at a UK offshore wind farm. This R&D facility was opened in 2011, designed specifically to develop the large blades.

In 2016, the first blades arrived at MHI Vestas’ pre-assembly facility in Belfast harbour. This site was the first bespoke terminal of its kind designed exclusively for offshore wind – a sign of the industrialisation of the supply chain as the offshore wind industry develops in the UK.

To transport the huge components of
its 8 and 9.5 MW WTGs, MHI Vestas
has chartered the specialised vessel Vestvind from United Wind Logistics. Vestvind is currently transporting turbine components to Belfast for the Walney Extension wind park off the UK west coast

Firm orders in the pipeline for the 8 MW WTG: