Recognising that environmental sustainability is a global issue, researchers from the US, Australia and Lao PDR have joined forces in a collaborative effort to improve safe fish passage through hydropower systems. By expanding knowledge beyond salmon to other species, advances in technology can be used to have positive global impacts and ensure the sustainable expansion of hydro. 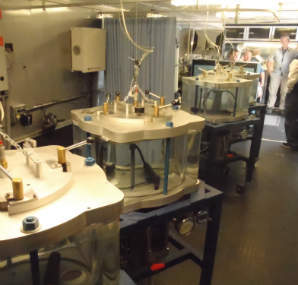 Any time a river is developed for irrigation diversion, power generation or water storage, the hydrology and ecology of the river is inevitably altered. Issues relating to impounding water behind concrete walls, changes to downstream river flows and water quality degradation are often associated with hydropower. Most instream developments have substantial ecological impacts, particularly on upstream and downstream fish migration. Barriers to fish passage can lead to dramatic declines in fisheries resources and this has led to the development of design criteria enabling construction of both upstream and downstream fish passage facilities.

In the Columbia River in the US, more than US$7B has been spent on efforts to save large migrations of salmon, an icon species in the region. Whilst this has helped save salmonids from extinction, there is still a reliance on hatchery production through much of its natural range. Real-world examples, such as this from the Columbia River, have led to concerns that hydropower development has the potential to cause irreversible damage to fisheries in both Australia and the Lower Mekong Basin. Development is gaining pace in the Lower Mekong Basin, where a village off-grid promotion project seeks to have 1000 remote rural villages powered by micro-hydropower projects within the next decade.

During downstream passage, particularly through regulators or hydropower facilities, there are three main factors that influence fish survival:

* Pressure change: Pressure changes can impact fish when rapidly moving from an area of high to low pressures (decompression). Decompression injuries are referred to as barotrauma and can result in injury and death. A barotrauma commonly observed is the expansion and rupture of a gas filled organ called the swim bladder which is used by fish for buoyancy regulation.

* Fluid shear stress: Fluid shear stress describes the interaction which occurs between two masses of water moving in different directions. Any fish trapped in the boundary between the two intersecting water bodies would be involuntarily torn in opposing directions (known as ‘shear stress’) which can also cause injury or death at high enough levels.

* Physical strike: Fish can collide with solid objects during downstream passage when water velocity exceeds swimming ability but other factors such as blade design, rotation speed and discharge also contribute.

Minimising exposure of fish to critical levels of barotrauma, shear stress and physical strike is required by hydropower projects if protection of downstream migrants is to be acheived. It is difficult to assess the relative contribution of each criterion to fish injury or mortality under field situations due largely to the inability to assess fish passage independent of the other factors (i.e. they are always interacting under field conditions).

One solution is to apply a reductionist approach where the relative contribution of each parameter to fish welfare is assessed independently under laboratory conditions. This is required to identify minimum threshold values of each parameter necessary to provide safe fish passage. Potentially negative impacts can then be mitigated provided they are addressed at the hydropower design phase. Then, a stepwise approach, including a combination of field and laboratory trials is needed to verify safe fish passage post construction.

Mini hydro is a potential alternative to large-scale hydro-power systems. Several projects, particularly in Thailand, are presently developing small systems (<100KW), to provide local sources of power for rural communities. In highly regulated systems, such as the Murray-Darling in Australia and the Mekong Basin, there is enormous potential to retrofit these to existing barriers and provide sustainable energy generation, especially to areas that cannot be reached by existing grid supply systems. However, there is presently little biological data available upon which to base the design and construction of mini hydro systems to ensure environmental sustainability. This is largely because the majority of existing data is based on criteria for North American salmon. The lack of information for other freshwater species is currently a leading concern for large-scale development of mini hydro because agencies are reluctant to provide construction consent due to the potential for ecological damage. These concerns are not only confined to hydro passage, but to weirs and other water infrastructure.

For instance in the Murray-Darling Basin it has been demonstrated that up to 95% of Golden Perch larvae can be killed during passage through standard undershot sluice gates. Under such circumstances, retrofitting fish-friendly hydro at structures of known fish mortality may actually create improvements to existing conditions. There is therefore an urgent need to research aspects of mini hydro design in order to validate that impacts on fish are minimal. If so, widespread application of these units could help to maintain capture fisheries, provide options for cheap sustainable power to rural areas and assist with the development of regional industry.

Fish species vary in their response to downstream fish passage conditions and there is now much evidence that existing mitigation options for salmon are not suitable for other freshwater species. So for fish found in the Mekong or Murray-Darling Basin, these design criteria need to be investigated species by species. Both of these systems are scheduled for water infrastructure development, particularly in the next decade by construction of hydro-power schemes, and without consideration of environmental impacts, it could eventually lead to collapse of commercial fisheries and important sources of sustenance for many people.

To determine safe fish passage criteria requires equipment and apparatus that are capable of replicating field conditions in the laboratory. Researchers from the Pacific Northwest National Laboratory (Richland, US) have been global pioneers in determining the impacts of pressure change and shear on salmon. To obtain the data required to inform design criteria, these scientists needed to construct highly specialised equipment. One such example is where researchers have developed barotrauma chambers which can replicate rapid pressure changes, in a confined space, equal to transporting a human from sea level to the top of Mount Everest and then back again in less than a second. Interestingly, this is the exact rate of pressure change experienced by some fish moving through a large-head turbine.

Researchers have also constructed purpose-built flumes which could generate high levels of shear stress under controlled conditions. Perhaps the most important advance was the development of the Sensorfish, a highly specialised device which records pressure changes, acceleration and blade strike making 3000 recordings per second. The Sensorfish can be used to record passage conditions through turbines, are then recovered downstream, and the data downloaded to a laptop. The technology has revolutionised the global understanding of fish impacts during turbine passage.

Recognising that environmental sustainability is a global issue, researchers from the US, Australia and Lao PDR have joined forces in a collaborative effort to improve safe fish passage through hydro-power systems. This global collaboration has involved replicating Sensorfish, barotrauma and shear stress work in Lao PDR and Australia in an effort to obtain data on other fish species.

Researchers are initially focusing on assessing the critical levels of pressure change, fluid shear and blade strike which is highly likely depending on the size, age and weight of different fish species. Once the threshold values of each are determined, researchers then work with engineers to create hydro facilities that use this fish friendly design criteria.

Full-scale pilot hydropower plants are then constructed and researchers perform real-life assessment of fish survival to ensure everything is performing to specification. It is an excellent example of adaptive management in practice. By expanding the knowledge of hydropower issues beyond salmon to other species, advances in technology can be used to have positive global impacts and provide confidence that expansion of hydropower production will be sustainable.

Research staff are now initiating work in Lao PDR and Australia to ensure design criteria based on local fish species is available in the near future for inclusion in new development projects. Work in the US is also being expanded to other fish species such as lamprey and white sturgeon, in an effort to increase the understanding of impacts on species beyond salmon. Researchers are hopeful of engaging developers to construct the first research-based, fish-friendly hydro plants within the next two years.