Public concern about radiation from the Gorleben radioactive waste store in Germany in 2011 highlighted the importance of radiation protection specialists being transparent about their working practices. GNS discusses its public outreach efforts. By Hartmut Schulze and Heinz Willi Engelmann 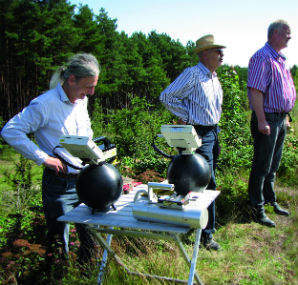 Today, the small Lower Saxon town of Gorleben, Germany is home to a nuclear waste disposal centre. The site includes an interim radioactive waste store run by GNS, the joint waste disposal company of the German nuclear power plant operators. It is also the site of an exploratory mine in the local salt dome, which is the responsibility of the German government. The vision was also for the Gorleben salt dome to become a final repository for radioactive waste, an idea that is still under consideration today.

Owing to the long-standing social disputes particularly concerning the final disposal of radioactive wastes, the 600-inhibitant town of Gorleben has become the focal point of opposition to use of nuclear energy in Germany.

The GNS works in Gorleben consist of the Gorleben waste storage facility (ALG) for low and intermediate level radioactive wastes, the transport cask storage facility (TBL) for highly radioactive wastes from reprocessing and spent fuel assemblies and the pilot conditioning plant (PKA). The conditioning facility will remain at a standstill until a site for a final repository in Germany is determined. Currently high-level waste with activity of 3.3 x 1019 Bq is stored at Gorleben, along with low- intermediate-level waste with an activity of 7 x 1014 Bq.

A maximum permissible dose rate of 0.3 mSv per year is stipulated in the licence for the Gorleben works. Thus, the annual dose at the most unfavourable receiving point must be less than one third of the limit value of the German radiation protection code of 1 mSv per year.

The fence-post dose had been assessed since 1983 by comparing the gamma and neutron dose rate at the fence and in the town of Gorleben approximately 2 km away. Active operation of the TBL began in 1995 with emplacement of the first CASTOR-type fuel assembly cask. Since then, several changes have been made

The two changes above required new approaches to deduce the background radiation in order to calculate the net contribution from the waste facilities. It was only possible to make comparisons with the previous methods to a limited extent.

All the measurement results were published from the outset. The level of the resulting fence-post dose was essentially nil up to 2002 and only increased beyond the order of magnitude of natural radiation from 2004 onwards, after there were a total of 56 casks or more in the transport cask storage facility. In this respect, there had not been major interest for a long time by critical groups in an explanation of the details of our measurements.

During 2011, the independent measurement body of the competent supervisory authority made a very conservative prognostic assessment with regard to the annual dose. This led to the fear that the authorised limit value of 0.3 mSv/year might possibly be exceeded by the end of the year. In light of this, a debate emerged for the first time in the media and in politics.

Critical groups such as Greenpeace and the Lüchow-Dannenberg Citizens’ Initiative for Environmental Protection (BI) then retrospectively performed their own interpretations of the measurement results contained in the published reports. In doing so, the changes made to the framework conditions in previous years were not correctly assessed. This was perhaps through ignorance of the complex relationships between causal factors. Thus, the conclusion was drawn for instance that the fence-post dose had already been exceeded, or would be by the end of 2011. In actual fact, the monitored value for the fence-post dose annual dose has remained at around 0.2 mSv per year since 2006 (Fig.1).

A further increase in the inventory (number of casks) in the interim storage facility would not result in a proportional increase in the fence-post dose either. The effects of increasing inventory are counteracted by the mutual shielding of the casks, the increasing distance of the new cask storage spaces from the works fence and the decay in the activity inventory by 3 to 4% per year. Hence, no higher dose values at the fence are to be anticipated in the future.

Critical groups attached particular importance to determination of the natural gamma radiation, which is to be subtracted from the gross measurement values at the fence. The terrestrial gamma background determined as part of the evidence preservation measurement programme in the eighties and early nineties was no longer valid as a result of the described changes (probe configuration, gravel path). Consequently, the previous subtraction of the gamma background at the measuring station in the town of Gorleben, (where entirely different conditions prevail to those now at the works fence), could no longer provide the actual net gamma dose.

In order to counter the agitation among the public and the incorrect interpretations of measurement and calculation results, GRS actively tried to include critics in its assessment. Fortunately, a group of representatives of the local citizens’ initiative with sound specialist knowledge and interested in objectivity were willing to collaborate.

Detailed explanations of the results of the environmental monitoring during 2011 were presented to municipal representatives and members of the citizens’ initiative. The contact with critical groups continued and GRS arranged several gatherings with the district council committee for nuclear facilities of the Lüchow-Dannenberg district. Efforts also included visits to the Gorleben works and culminated in joint measurements by representatives of GNS and of the citizens’ initiative at the works fence and on the company grounds. Simultaneous measurements of the neutron dose rate by the citizens’ initiative (using their own devices) and GNS yielded concordant results. The results (Figure 3) were then presented within a public meeting.

In summary, the joint investigations confirmed that the activities at the Gorleben interim storage facility did not produce radiation exceeding the authorised fence dose value of 0.3 mSv/year.

This result is all the more significant in that it was possible for the first time to achieve an important dialogue between the operator of the nuclear facilities in Gorleben and its critics.

The activities of GNS provide an example of how one can succeed in moving away from political and ideological discussions towards objective communication of information, with the aid of complete transparency and consistent inclusion of even critical groups. An important prerequisite, though, is that the critical group must be prepared to become technically acquainted with the complex relationships of causal factors and objectively discuss issues of radiation protection and nuclear technology. Neither irrational fear of radiation nor militant campaigns against nuclear facilities is of any help. It is hoped that a lasting breakthrough has been made with this connection in the region around Gorleben by means of the collaboration described.