Meeting the challenges of dam removal

A major dam removal project in Washington, US, presents a flow measurement challenge 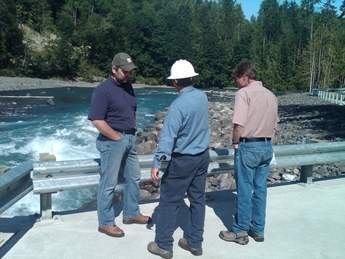 An ambitious plan to turn back the hands of time by nearly a century on the Elwha River in northwest Washington State is being carefully studied by stakeholders on other river systems where long-standing dams may someday be breached. Dismantling two concrete hydroelectric dams built in the early 20th century requires careful planning, skilled execution, and close attention to the flow of water that will nurture the reemergence of the river’s salmon population.

The removal of the 108ft-tall Elwha Dam about five miles from the mouth of the river, and the 210ft Glines Canyon Dam another three miles upstream, is expected to restore free flow to nearly 70 miles of the Elwha and its tributaries. Wildlife officials predict that restoring the Elwha’s natural state of braided channels across a large floodplain help the system’s population of five salmon species jump from current levels of about 3,000 returning fish per year to 300,000.

The concern will be ensuring that enough fish survive the restoration process to enjoy its benefits. One of the greatest challenges in restoring the river will be sustaining fish populations during the decade following dam removal, when sediment that has been trapped behind the dams – five million cubic yards that has accumulated since 1911 behind the Elwha Dam and another 13 million cubic yards upstream of the Glines Canyon Dam that has been collecting since 1927 – is washed into the Strait of Juan de Fuca.

Sediment offers an array of dangers to fish. Over the long term, it can lead to population decline by fouling the gravel beds where fish lay their eggs, and fill in pools that serve as nurseries for fry. On a more immediate level, when sediment levels reach 50 to 100 parts per million (ppm) of total suspended solids (TSS), fish can suffer abraded gills, stop feeding, and succumb to stress. TSS levels of 1000ppm can kill many fish outright. Wildlife officials estimate that sediment in the river water will average 1000ppm during the removal stage, and experience spikes of up to 10,000ppm at times. According to dam removal planning documents, the initial flush of sediment at dam removal could carry as much as 30,000ppm of suspended solids.

An experimental drawdown in 1994 provided insight on how river flow can be managed to limit bank erosion and discourage sediment buildup along the river. The restoration plan also calls for three “fish window” periods per year, curtailing the release of sediments during fish migration periods.

A 53 million gallon per day (MGD) water treatment facility along the Elwha will also play critical roles in water quality. The plant, operated by Veolia Water North America, will treat river water used by the City of Port Angeles’ water supply as well as a fish rearing channel operated by the Washington Department of Fish and Wildlife and a fish hatchery operated by the Lower Elwha Klallam Tribe. The hatchery and fish rearing channel will be a safe haven for 10 species of fish native to the river, including salmon, trout and lamprey. Initially moved to upstream spawning beds by truck, helicopter and backpack, these fish will be the foundation of the restored system’s wildlife population. Ensuring that they receive clean water in the meantime is vital.

The water treatment plant’s influent is fed by a pair of open, 6ft-wide concrete intake channels that carry a daily average of 20 to 30 MGD from the river. Each of the channels is fed by a 4x4ft sluice gate. The channel depth begins at 20ft. Over the course of a 100ft straight run, the canal’s bottom slopes upward for the first 40ft until it is 8-10ft deep at the head of a fish screen. A chute returning fish back to the river is located at the end of each of the channels.

The plant’s sedimentation removal control system is regulated by the volume of influent river water diverted by the facility. The as-built design utilized an ultrasonic level monitoring sensor in each canal to allow operators to continuously monitor stage. However, the original plan to use a rating curve to calculate flow from level presented several unexpected challenges. Once the canals became operational, it became evident that the cross-sectional flow profile was not laminar, and considerable flow variability was observed between the two channels even though the level measurement remained stable. This prompted the consulting engineering firm and Veolia to explore other methods for accurately measuring flow in this challenging open-channel environment.

“In a typical water treatment facility, you would have influent closed pipes of a known inside diameter that would remain full,” notes Kevin Simpson, a senior project manager with SonTek/YSI who was called in to help tackle the flow measurement problem. “In this situation, we needed a complete vertical profile of water velocity data in an open channel with variable water depth to calculate flow accurately.”

To collect that data with pinpoint precision, Simpson and SonTek/YSI application specialist Kevin Labbe mounted a SonTek FlowTracker handheld acoustic Doppler velocimeter (ADV) on a wading rod. Working from a catwalk installed over a channel by Veolia, the duo measured flow and velocity at five stations horizontally and 10 points vertically to investigate water movement throughout the canal. The results were surprising – and explained why level didn’t provide enough information to accurately define flow.

“We see bi-directional flows in the system,” explains Simpson. “The bottom third of the channel is positive flow, moving downstream the way it should, but the middle of the channel – where you would typically find the highest water velocities in a uniform channel with laminar flow – is fairly stagnant. Finally, the top third of the cross section is moving in a negative direction. It’s a surcharge condition – flows are coming in and all of a sudden hitting a convergence point. The system can’t discharge water as fast as it’s coming in. With the bi-directional flow, it would be very difficult for a conventional flow meter to sort out.”

Simpson and Labbe installed a SonTek Argonaut-SW acoustic Doppler meter on the bottom of each channel at a 12-foot depth. The Argonaut-SWs employ a vertical acoustic beam for highly accurate level measurement and two angled acoustic beams to provide data on water velocity, utilizing the average of at 10 individual cell measurements along the entire vertical profile from the channel bottom to the surface. Based on user-input information on channel geometry, the Argonaut-SW then calculates flow.

Cell-end data, signal-to-noise ratio (SNR) measurements and other diagnostic data output from the unit ensure that the Argonaut is performing nominally during episodes of high suspended solids anticipated during the dam removal process – an important fail-safe feature. Simpson explains that the cell-end and SNR measurements verify that the acoustic beams responsible for water velocity measurements reach the surface with adequate strength for accurate measurements, and that interference is not encountered from unusually high amounts of sediment in the water, or other, localized variables such as debris.

Augmented by velocity indexing data collected by Simpson and Labbe with their SonTek FlowTracker across the channels’ anticipated level range, the Argonaut’s firmware internally calculates level and flow in real time. “The Argonaut is constantly changing its calculations based on its level measurements,” Simpson says. “The value to water velocity indexing is you get additional velocity measurements across the entire cross section of the channel to the left and right of the SW’s acoustic beams. For example, it is not unusual to see lower velocities closer to the channel walls than you would see in the middle, where the meter is located. The ability to input indexed data into the Argonaut-SW further enhances the instrument’s versatility and accuracy.”

Though the Argonaut is capable of nearly constant measurement, Simpson and Labbe programmed the Elwha installations to report at five-minute intervals to deliver a more stable flow rate, limiting “noise” from brief surges or pulsing. The YSI Integrated Systems and Services Team also designed an interface to convert serial data from the Argonaut into multiple analog 4-20 mA outputs commonly used by municipal water treatment facilities in conjunction with their programmable logic control (PLC) systems, which are central to automated control of plant processes.

“The Argonaut is typically used as a remote-powered instrument that records data autonomously in an open channel such as a river or stream, but we interfaced it with Veolia’s PLC system,” Simpson explains. “We made it compliant with their industrial control system so they can automate their process and make decisions based on the instrument’s data. We’re kind of merging the outdoor environmental monitoring world with the indoor process control world.”

“Because the Argonaut utilizes similar methodology and design to SonTek’s acoustic Doppler profiler (ADP), which is used in oceanographic research and river hydrology modeling, it allows us to get better accuracy in challenging, open-channel conditions than some of the common municipal open channel flow meters,” he adds.

As the Elwha River cleanses its main stem and recreates its ancient, braided spawning grounds, the Argonaut SWs by the intake channels will be silently profiling diversion water. Wildlife officials hope future generations will marvel at the return of massive runs of fish in the Elwha. Meanwhile, hydrologists will find an extra bit of wonder in the technology at the bottom of the river’s concrete diversion canals.