A full height fish ladder is being constructed to enable the safe passage of fish over the Thompson falls hydro project in Montana. L Brent Mabbott, Ginger Gillin and Chad Masching explain why this is the first ladder in the US to be built specifically for bull trout 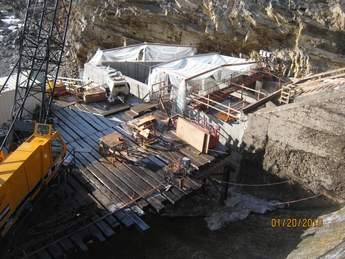 In Thompson Falls, Montana, US, a fish passage ladder is being constructed at the Thompson Falls hydroelectric plant on the Clark Fork river. This precedent-setting project is the first full height fish passage ladder in the US built specifically for the threatened bull trout, and is being constructed specifically to provide over-dam passage for this species.

The project is being developed as a collaborative effort through an inter-agency, multi-disciplinary technical advisory team (TAC) composed of:

• US Fish and Wildlife Service (USFWS).

• GEI Consultants GEI and others.

With an estimated construction cost of just over US$6M, the project is expected to be completed by the autumn of 2010.

The Thompson Falls plant, which began operation in 1915, consists of a main dam and a dry channel dam with an island in between. Both dams are used to regulate the reservoir, which has a storage capacity of 10Mm3, and control flow during high spring runoff. The main dam is a 278m long and 9.8m high concrete arch gravity structure with 6m of flashboards and stoplogs above the concrete spillway. The dry channel dam is a concrete gravity structure with an overflow spillway and an overall length of 88m. Thompson Falls is a run-of-river project with a total generating capacity of 94MW, generating enough power to satisfy the energy needs of over 70,000 households.

In 1979, the Federal Energy Regulatory Commission (FERC) relicensed the Thompson Falls dam (FERC Project Number 1869) to the Montana Power Company (now PPL Montana). A major order amending the licence was issued in 1990 allowing for construction of an additional powerhouse and generating unit. That project was completed in 1995. In 1999 PPL purchased the power generating assets of the Montana Power Company and the licence was transferred to PPL Montana.

The need for a fish ladder

The Clark Fork River at Thompson Falls was originally natural rapids, passable to migratory fish. After the dam was built, bull trout (Salvelinus confluentus) and other fish species were prevented from swimming upstream to reach spawning tributaries. Fish were commonly observed jumping on the bedrock outcroppings downstream of the dam when small amounts of flow cascaded over the rocks. Unable to pass the dam, the fish would typically fall back downstream of the main dam without successfully spawning.

Because bull trout are present in the Clark Fork river upstream and downstream of the Thompson Falls hydro project, a draft Biological Evaluation (BE) was prepared by PPL Montana and submitted to the United States Fish and Wildlife Service (USFWS) and FERC in 2003. The purpose of this BE was to assess the impacts that Thompson Falls dam and powerhouse may be having on bull trout and to make recommendations about conservation measures to reduce those impacts.

Section 7 of the ESA requires federal agencies to ensure on-going project actions are not likely to jeopardise the continued existence of federally listed threatened or endangered species, or to destroy or adversely modify designated critical habitat.

The draft BE concluded that the Thompson Falls project was likely to adversely affect bull trout due to the lack of upstream adult fish passage, potential for delay or mortality during downstream passage and potential water quality impacts from increases in total dissolved gas (TDG) during high spill time periods. PPL Montana sought conservation measures and has worked cooperatively with the TAC over the last eight years to clarify the regulatory issues, plan research activities, and develop conservation measures appropriate to address bull trout issues at the project.

Initially, the TAC managed research to determine the numbers and types of fish attempting to pass the project. Fish were trapped at the main dam using a 13m long, 0.6m wide aluminium, Denil-type fish ladder with a fish trap constructed at the top. The installation took advantage of the cascading flows in the area near the left abutment of the dam. Fish captured in the trap were enumerated, tagged, and released. Bull and westslope cutthroat trout (Oncorhynchus clarki) were radio-tagged, trucked above the dam, and released. Signals from the radio tags were tracked so that biologists could assess trout movements and determine the location of spawning areas.

Data collected during this research indicated that large numbers of a wide range of species were attempting to migrate past the main dam. In addition, bull trout were found to spawn in tributary streams over 48km upstream of the main dam. While this method of collecting fish downstream was effective for research purposes, the small Denil ladder was insufficient for providing permanent fish passage. It was effective only during time periods when little or no spill was passing over the dam. In addition, the Denil ladder had to be removed from the tailrace every spring prior to high flows, or else risk being washed away, a difficult and labour-intensive project.

A fish behaviour study was implemented to determine the best location for a permanent fish passage structure. Trout were collected in the tailrace, radio tagged, and released. Their movements as they approached the dam were tracked. Experiments with spillway opening plans were conducted to determine if fish behaviour could be influenced by modifying hydraulic conditions in the tailrace. The conclusion of these studies was that fish approached the main dam when migrating upstream, and could be attracted to the right bank by opening panels on the spillway in a specified order.

The new fish passage ladder consists of a full height pool and weir fishway on the right abutment of the main dam. The design incorporates a sequence of 48 concrete pools, each approximately 1.8m long by 1.5m wide by 1.2m deep and separated by aluminium weir plates. A 0.3m water differential is controlled between the pools by either a 0.6m wide notch at the top of each weir or an orifice near the bottom of each weir that will pass approximately 0.17m3/sec. Biologists will have the option to switch between the two weir designs to help identify the best configuration for attracting bull trout up the ladder.

Because the fishway has a nominal 0.17m3/sec of flow passing from pool to pool, a larger flow is required to entice fish to enter the ladder. The ladder has an auxiliary water system (AWS) to increase flow in the downstream ladder pools and create a total discharge of 1.7m3/sec at the entrance pool. To further assist in attracting fish to the ladder, a 0.6m3/sec high velocity attraction AWS is also being constructed. The additional AWS discharges directly to the tailrace in front of the ladder to create an area of turbulence similar to the bottom of a waterfall; to draw the fish into the ladder.

The ladder design includes a sampling loop at the upstream end of the fish ladder. The fish sampling facilities under construction include a fish trapping mechanism which directs fish into a holding pool. Once enough fish are in the holding pool, a horizontal fish crowder corrals the fish to one side of the pool and into a fish lock. Water is then pumped into the lock, and fish are lifted 4.6m up to a sampling platform where they can be sorted and handled. Non-intended fish such as invasive species can be separated from the native population, and other fish can be released upstream of the dam.

PPL Montana will collect and record species, numbers, condition, and other pertinent data for fish passed at the project. Collection of this data will help fine-tune the operation of the ladder. Because water used to entice fish through the ladder is therefore not used for power generation, it is in the utilities’ best interest to use as little water as possible to attract fish to the ladder. By experiment and analysing data, PPL is better able to determine the optimal amount of water needed to successfully operate the ladder. In addition, data collection will also be used to enhance fisheries management in the area by allowing managers to quantify the numbers, species, and timing of fish passing through this ladder. As part of this data collection and analysis, all collected bull trout will be tagged with passive integrated transponders (PIT tags) to gather project passage data. The ladder will be equipped with PIT tag readers that record when a tagged fish enters the ladder and when it enters the holding pool at the sampling loop.

In addition to bull trout, PPL Montana anticipates that the ladder will provide upstream passage to a wide array of other migratory fish species attempting to pass the project to reach upstream spawning areas. This project is one component of an overall programme to restore ecological connectivity for fish in the Clark Fork river basin. Once upstream of Thompson Falls, fish will have access to miles of free flowing river.

PPL Montana will operate the fishway during low and no spill periods from 1 July to 15 May annually. Fishway dewatering and maintenance will occur from about 15 November to 28 February because bull trout are not typically migrating in the mainstem of the Clark Fork river at this time.

Under the terms of the FERC licence for the project, PPL Montana was required to consult with the State Historic Preservation Office, conduct a cultural resources survey of these areas, and file a report with the FERC documenting the survey prior to any land-clearing, land-disturbing or spoil-producing activities. Therefore, PPL Montana conducted an intensive archaeological survey of the proposed project area. The survey found the fish ladder project will affect constituent elements of the main channel dam. As a result, PPL Montana included these features in the Historic American Engineering Record (HAER) documentation, which was prepared as part of the overall cultural resource management study associated with the proposed fish ladder project.

The permits required for this construction project included a Clean Water Act Section 404 permit issued by the US Army Corps of Engineers, a biological opinion and incidental take statement from the US Fish and Wildlife Service, and an order from the FERC. The environmental concerns about construction included how to manage debris from demolition and fill material to prevent it from entering the river channel.

This project was developed through a collaborative process with the TAC members and was designed by GEI. The construction contractor is COP Construction from Billings, Montana. Construction supervision is being done by Morrison-Maierle, with assistance from GEI Consultants.