Making the most of your assets

A number of technologies are available and in the pipeline to increase the competitiveness of existing combined cycle assets based on FA gas turbines. 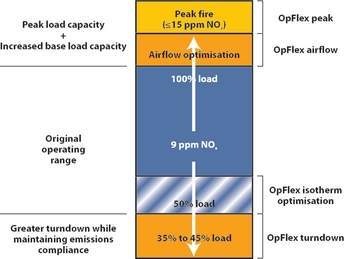 Reducing startup time and cost, with lowering of emissions and overall generation costs; increasing load ramp rates, peak load capability, and base load capability with gas turbine inlet conditioning; improving dispatch ranking; participating in the ancillary services market for load-frequency regulation; and improving gas turbine part-load balance between output, combustion dynamics and emissions. These are some of the ways of enhancing returns from existing FA based combined cycle assets, through innovations that relax operational specifications on power plant components and increase systems integration. In the longer term technologies are being developed to increase fuel flexibility, enabling FA based plants to make use of lower cost gas fuel.

Selecting the right mix of options for a particular plant requires a complete understanding of the goals and business strategy of the asset’s owner.

A number of GE-developed concepts for getting more out of existing FA based assets in these ways have been implemented on the substantial combined cycle fleet that GE itself operates, through GE Global O&M Services (GO&MS).

A good example of what can be done is increasing the start up efficiency of a GE 207FA combined cycle steam turbine.

Steam turbines can experience significant thermal stresses during a startup process, which can reduce total life – or in the most severe cases – result in a bowed rotor at start-up. Implementing an Automatic Turbine Start-up (ATS) system, can reduce this operational variability, as compared with a manual start-up process. Further gains can then be realised by improving the ATS logic to balance the turbine’s cycle life against short-term operating economy. In this application example, a significant reduction in overall cold start-up time was realised.

Life expenditure per cycle is defined as the contribution made by one complete cycle towards the initiation of a crack relative to the 100% probability of crack initiation. Theoretically, when the sum of these individual contributing events reaches 100%, there is a possibility that a crack will be initiated in the high temperature stationary or rotating parts. Since this prediction of crack initiation is based on average material properties and somewhat idealised cycles, there may be large differences between the predicted number of cycles to cracking and the actual number of cycles to cracking for a particular component in a specific turbine.

The selection of a life expenditure value (in % per cycle) is somewhat complicated by the many factors that have to be considered. For instance, if the goal for a particular unit is to undergo a total of 5000 major transient operations in its economic life, then each cycle of equal severity would consume 100%/5000, which equals 0.02% per cycle. While this might be a good value to use for base loaded units, 0.01% per cycle might be satisfactory for cycling operation. In selecting values for proposed cyclic life expenditures (CLE), differing values could well be chosen for different types of duty. For example, the 0.02% curve should be chosen for startups, and the 0.01% curve used for load changes if they are frequent.

An economic evaluation of the short-term advantage of deliberately starting and loading machines faster (in order to save the cost of start-up fuel) must be made against the potential costs and consequences of events such as cracked rotors and shells. For units that make infrequent starts, consideration of a higher damage rate per start will minimise the starting time. The recommended CLE curves are: High Duty, 0.05% (2000 cycles); Nominal, 0.02% (5000 cycles); and Conservative, 0.01% (10000 cycles).

By analysing the real time data for several start-ups, potential adjustments were identified for the steam turbine heat transfer coefficients to better predict actual stresses. These changes resulted in a better correlation between look-ahead stresses and the actual stresses realised in the HP rotor upon HP steam admission. This enabled the full range of stress to be utilised without exceeding the 100% allowable stress point – while maintaining steam turbine cyclic life expectancy.

Prior to such improvement – during cold starts with steam turbine metal temperatures starting at less than 130°F (54.4°C) and with ATS in Auto mode – forward flow (FF) transfer did not occur when expected with intercept valves at 50% open. It appeared that the forward flow permissive was not engaging, disabled by the predicted look-ahead HP section bore and surface stress constants.

Raising the steam turbine metal temperature to 300°F (148.9°C) did not clear these holds even with less than 600°F (315.6 °C) difference between metal and steam temperatures. Forward flow mode had to be forced by going to manual, selecting FF, and then transferring back to Auto. Plant start-up data showed that this approach only utilised about 65% of the allowable stress.

• surface and bore stresses; and

The improved ATS program aimed for a more controlled use of the stress imposed on the steam turbine. Although stresses always increase during the start-up, they did not exceed the 100% limit, achieving a better balance between start-up time savings and stress. The stress calculations for surface stress and rotor bore were revised to improve the correlation between look ahead stress and actual stresses seen after transfer to forward flow. The heat transfer coefficients were revised, as the look ahead stress constants were too conservative and only resulted in an actual peak stress of 66% being reached after transfer to FF. This was the largest contributor to the reduction in start-up time. Further improvements were made by reducing the 3000 rpm steam turbine lube-oil temperature hold set-point to 100 °F (37.8 °C); and by reducing the 3600 rpm steam turbine lube oil temperature hold setpoint to 110 °F (43.3°C).

For 7FA gas turbines, GE has assembled a portfolio of technologies, called OpFlex™, aimed at improving operational flexibility. These include measures aimed at reducing start-up fuel costs and start-up times, to improve start-up repeatability, to reduce NOx produced and increase NOx trading credits, and to reduce visible emissions during start-up.

OpFlex Start-up NOx During the start-up of 7FA+e gas turbines with DLN 2.6 combustors, high levels of NOx and CO are produced until the combustor and gas turbine reach steady state operations. NOx emissions become visible at concentrations above approximately 25 ppm, which means that a yellow plume can usually be seen at the stack during start-up under these conditions (see photo opposite). The OpFlex Start-up NOx technology consists of control system enhancements to the integrated Advanced Fuel Scheduling system. This allows a reduction of visible emissions in this portion of the start-up process to be achieved at about 20% gas turbine load and above.

OpFlex Turdown/Airflow/Peak Other elements in the OpFlex portfolio can provide up to 6.5% more output under higher power base load and peak load conditions – and up to 15% of additional “turndown” capability for low load operation.

Many combined cycle plants have difficulty turning down below 60-65% load due to limitations in the HP attemporation spray capability. To address these attemporation problems, the Isotherm Optimization option is packaged with OpFlex Turndown where necessary. For certain units with turndown currently limited by the HRSG to 65% load, OpFlex Turndown with Isotherm Optimization can provide between 20% and 25% incremental turndown.

Another option, OpFlex Airflow, can provide operators with the ability to increase the output capability of the plant by increasing the compressor flow capacity. The airflow increase is achieved by controlling the unit such that Inlet Guide Vane (IGV) angle is increased from the nominal 84 degrees open to about 87 degrees open at baseload, together with advanced fuel scheduling control logic. This enables higher base load output without a corresponding increase in emissions or unduly altered combustion dynamics.

A further offering, OpFlex Peak, provides the ability to operate the turbine with a higher firing temperature while maintaining NOx at less than 15 ppm (31 mg/Nm3). The peak fire capability requires installation of a Continuous Dynamics Monitor (CDM) to ensure that combustion system parameters are kept at optimal performance.

These OpFlex Turndown, Airflow and Peak systems have been implemented at plants within the GO&MS fleet.

Turning to the plant as a whole, other measures are available to increase load ramp rate capabilities. One 207FA facility operated by GO&MS found it was not meeting NERC’s standards due to volatile load swings in the region, which included several large industrial customers. An evaluation was performed to see what the plant equipment could do, not just the gas turbines, but the rest of the plant as well.

Further benefits are achievable through the right choice of power plant control set-points. Plant control systems are designed to keep a plant at established control set-points; however, they are not always able to determine the right set-points. The more dynamic and complex the plant’s operation, the more difficult this determination becomes, involving many simultaneous operating and regulatory constraints – along with real-time fluctuations in prices, costs, and equipment degradation rates.

While the competitive advantages that can be realised with appropriate set-points are considerable, true plant efficiency goes further. Simply delivering appropriate set-points to the operators for manual implementation is impractical. They would need to make multiple set-point changes every three to five minutes – while simultaneously ensuring that power and steam generation meet contractual and regulatory requirements.

CLOC systems are deployed in a number of the units operated by GO&MS, for tie-line control, host steam balance, and combined cycle generating unit load balance.

Looking to the future, other technologies under development that should help improve the competitiveness of the existing combined cycle fleet include the Wide Wobbe system, for increased fuel flexibility, and gas turbine inlet air conditioning.

Wide Wobbe By permitting the operator to burn gases with a wider range of WI (Wobbe Index) values, the gas fuel cost can be lowered.

The Wide Wobbe system employs advanced closed loop gas turbine controls to maintain acceptable combustor dynamics and emissions in the face of varying fuel composition. This provides the operator with the capability to use low cost imported liquefied natural gas (LNG), along with the ability to switch between natural gas sources having significantly (>5%) different Wobbe Indices. Further benefits include the ability to:

• Use re-gasified LNG that is supplied from the same LNG terminal, but originates from a variety of sources around the world (eg, Trinidad, Algeria, Qatar).

Responsiveness is a particular issue as the closed loop system must be able to rapidly respond to changes in fuel composition. Further challenges are the Mk V controller I/O and memory limitations. To perform the required calculations-upgraded controller capability is required for Mk V control systems.

GO&MS, which currently operates 54 facilities in 18 countries, comprising over 17 GWe of generating capacity, acts as the fleet leader for proving new technologies such as those discussed above (for 9H and 7H, as well as 9FA+e). RAM (reliability, availability maintainability) data for units in the GO&MS fleet are tracked through the SPS ORAP system and it is interesting to note that, for F class units, GO&MS is presently recording about 2 percentage points (?) better availability than the industry average.