The ±500 kV, 1000 km Mundra to Mohindergarh transmission line will be India’s first in private hands, as well as being among the longest lines to be put into commission in the sub-continent. 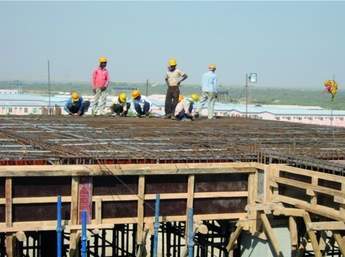 In May 2009 Siemens AG and its Indian arm Siemens Ltd won an order from Adani Power (APL, a unit of the diversified Adani Group) to construct India’s longest private HVDC transmission line. It is also the first HVDC contract to be awarded by a private sector company in India. The bipolar 2500 MW, 500 kV line will traverse the 960 km between the port city of Mundra in Gujarat on India’s west coast to industrial load centres in Mohindergarh near New Delhi in the power deficit state of Haryana. The first phase of the project is scheduled to be commissioned by February 2011 and the second, in July that year. The order is valued at around Rs1400 crore (1 crore = 10 million rupees) or r210 million.

The contract calls for installation of the system, including the turnkey execution of complete HVDC terminal substations at Mudra and Mohindergarh and associated electrode substations and a repeater substation midway. Siemens will erect the second converter station at the end of the HVDC link close the Bhiwadi converter substation. This station is also part of the Ballia-Bhiwadi HVDC system, which is still under construction.

The new line will carry electricity from Adani Power’s 4620 MW coal-fired power plant in Gujarat, now under construction, to Haryana. In August last year, APL entered into a power purchase agreement with Haryana Power Generation Corporation Ltd to sell 1424 MWe of power, for which the Mundra-Mohindergarh line is being built. Another 2000 MWe will be sold to Gujarat through the 413 km dedicated 400 kV line from Mundra to Dehgam.

APL will operate the HVDC system as well as the Mundra power plant. The Ahmedabad-based company is a major importer of coal and operates the world’s largest harbour terminal for imported coal as well as being India’s largest private energy trader, and the Mundra plant is one of a number of thermal power projects being undertaken currently by the company. APL is also developing a 1980 MW coal based thermal power project at Tiroda, Maharashtra through its subsidiary, Adani Power Maharashtra Ltd. (APML) and is planning to develop two thermal power stations at Dahej and Kawai totalling about 3300 MW.

Siemens will assume overall responsibility for the project, including design of the entire HVDC system, and will supply core components such as the converter valves, converter transformers, smoothing reactors, protection and I&C equipment, and the AC and DC filters. Siemens will also handle shipping operations, civil engineering, installation and commissioning.

This 960 km link will be the third HVDC?system by Siemens in India where rising electricity demand and the construction of large, centralised power plants is driving demand for efficient, high voltage transmission technologies. The first was the 2000 MW ‘East-South’ long-distance link, which still ranks as the second longest HVDC transmission link in the world, although it will be overtaken in due course by the 1500 km Rio Madeira link in Brazil. Since 2003 this system has been transmitting energy from the Talcher power plant complex in the state of Orissa in the east of India over 1450 km (900 miles) to the industrial region around Bangalore in the south. In 2008 Siemens secured the Ballia – Bhiwadi contract for the HVDC terminals. Power is transmitted over a distance of 780 km by this transmission link.

India has installed power generation capacity of about 148 000 MW. Nevertheless, the power situation in the country remains problematic owing to higher growth in demand compared to the growth in power generation, with peak hour shortages reaching 14 %.

Adani Power Ltd has ambitious plans to generate around 10 000 MW of power by 2013. Its Mudra thermal power plant will produce up to 4620 MWe in phases with the first 330 kW turbine going on stream in June 2010. Another plant will be built at Tiroda near Gondia in Maharashtra through its subsidiary, Adani Power Maharashtra Ltd. (APML) with a capacity of around 2000 MWe.

Other projects in the pipeline include the 2000 MWe Dahej power plant in Gujarat and the 1320 MWe plant in Kawai, Rajasthan.

The bipolar DC system is to be rated for a continuous power of 2500 MW (±500 kV, 2500 A) at the DC terminals of the rectifier converter station. The line will be able to operate in bipolar mode, and in monopolar mode with ground return or metallic return. At a maximum ambient dry bulb temperature of 50°C the converter stations are designed to transmit continuously full rated power without the redundant cooling system in service, and for 2 hours an overload of 1.1 pu rated power with redundant cooling in operation. For half an hour an overload of 1.1pu (bipolar) or 1.2pu (monopolar) is possible up to maximum ambient dry bulb temperature without redundant cooling available.

The HVDC interconnection scheme is capable of continuous operation at any reduced DC voltage level from 500 kV down to 350 kV (70%). At 80% voltage the maximum DC current is 2250 A and at 70% voltage 2145 A without redundant cooling equipment in service.

Although the normal power flow direction is from Mundra to Mohindergarh, the system has been designed with the capability to transmit power in both directions.

In order to ensure the highest level of component and system reliability and availability with minimal downtimes, fast fault detection and effective repair and maintenance strategies as well as fault-tolerant control systems, redundancy, spare components and quality assurance are required. To provide the necessary high quality of the HVDC control and protection system intensive off-side tests (eg a functional performance test) are to be performed.

The performance requirements for dynamic response, reactive power exchange with the AC system, overvoltage control, AC voltage distortion, equivalent disturbing current on the DC side, radio interference and audible noise are subject to design limits specified in the technical specification. Noise filter equipment (see illustrations on page 36) is provided for the AC switchyards and the DC lines in order to meet the specified power line carrier interference limits.

The project employs what its makers claim is the most modern voltage control, ie direct light-triggered thyristors (LTT) with integrated overvoltage protection, an arrangement that eliminates the need for electronic logic at high potential. Keeping the number of components as small as possible without neglecting protection and monitoring aspects results in high reliability, as well as creating compact and economical thyristor valves with little maintenance requirements. The excellent operating performance of LTTs has already been demonstrated in the HVDC schemes of Pacific Intertie, Moyle Interconnector, Gui-Guang I and II, Basslink and the Neptune project. The Ballia-Bhiwadi HVDC project also employs this technology.

There are several private lines being planned or constructed in India where private sector participation in developing and operating major power transmission lines is regarded as an evolutionary step, a natural result of the opening up of India’s power generation sector in the early 1990s.

The Union power ministry made a formal beginning to seeking private sector participation in large power transmission projects in late 2006 and that same year decided to set up around 14 mega transmission projects through private participation (Table 1) on the lines of, and in some cases to evacuate, the ultra-mega power project series of new power plants. There are now signs of the private role emerging, probably not in the ongoing Eleventh Plan period, but in the next Plan period which is likely to see several private projects coming to fruition and laying the foundation for more private transmission lines in the subsequent years.