Lithuanians prepare for a non-nuclear future

With the Ignalina nuclear plant scheduled for final closure in 2009, the veteran Elektrenai gas/orimulsion/HFO fired power plant will once again become Lithuania’s major electricity supplier, meeting about 70% of supply. The plant is therefore undergoing a major upgrade, enabling it to use high sulphur fuels and still meet LCPD emissions limits. 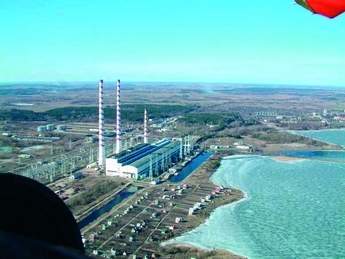 When it comes to percentage of nuclear generation Lithuania was for several years top of the league, with about 80% of the (admittedly relatively small) country’s electricity coming from nuclear reactors – even higher than the figure for France.

However, on nuclear safety grounds, under the terms of its EU accession treaty Lithuania agreed to phase out its two reactors, Ignalina 1 and 2, which entered service in the mid-1980s. Unit 1 was closed at the end of December 2004 and current commitments require unit 2 also to be permanently shut down, before 2010.

The two Ignalina units are of the Soviet designed RBMK type (as used in the Ukraine’s ill-fated Chernobyl station) and at 1500 MWe each they also have the distinction of being the world’s largest operating reactors, in terms of original design rating.

To help secure Lithuania’s power supply during and after the Ignalina closure, a major upgrading programme is being undertaken at Lithuania’s other big power station, the 1800 MWe Elektrenai plant. This large multi-fuel fossil fired station, fuelled mainly with natural gas (piped in from Russia) but also burning orimulsion (up to 3% S) and HFO (up to 3.5% S), employs Soviet boiler technology with supercritical steam conditions. It was built during the period 1960-72 for baseload operation – a role it

fulfilled until 1992. Since then, with Ignalina taking on baseload duties in the newly independent Lithuania, the role of Elektrenai has become that of maintaining reserve capacity in the Lithuanian electricity system and peaking duty, recording a load factor average as low as 5% in recent years.

With the final closure of Ignalina, however, the Elektrenai plant will once again resume its duties as Lithuania’s main electricity generator, providing about 70% of the country’s power.

To prepare it for this new life as one of the country’s strategic assets, the main aim of the upgrade programme is to achieve compliance with national and EU environmental requirements, including the post 1 January 2008 stipulations of the LCPD, on all three fuel types, gas, orimulsion and HFO – with much greater use of orimulsion envisaged, to reduce dependence on Russian gas.

The upgrade programme also includes rehabilitation of existing regenerative air preheaters and modernisation of control systems to achieve greater dispatch flexibility than envisaged in the original design and more in keeping with the needs of a modern liberalised electricity market.

The Elektrenai plant complex consists of four 150 MW and four 300 MW steam turbines, with a total of twelve 150 MW boilers:

• Blocks 1-4 are 500 t/h units, served by a common 150 m stack. As well as generating power, units 1 and 2 also provide district heating to Elektrenai. Units 3 and 4 (300 MWe in total) are to be retired and are not included in the present upgrade programme.

• Block 7 and Block 8 are also served by a common 250 m stack. The configuration is basically the same as Blocks 5 and 6, with each block, consisting of two boiler units (7a & 7b and 8a & 8b, respectively), supplying a single 300 MW turbine. Pre-upgrade, recirculation of flue gas into the combustion air was employed for NOx reduction on all boilers except 5a and 5b. Boilers 6a and 6b have low NOx burners, boiler 2 has an ESP and boiler 8b has already been equipped with an Alstom NID dry FGD system plus ESP.

Prior to retrofit, the dust emissions from unit 2 on HFO and orimulsion are about 50 mg/Nm3, while the corresponding figure for the other units is 450 mg/Nm3 (5 mg/Nm3 on natural gas).

The upgrade programme consists of four sub projects, with FGD (plus ESP) systems and low NOx burners awarded to Alstom, control systems to Emerson and air preheater rehab to Rafako:

• Low NOx burners on boiler units 1, 2, 5a, 5b, 7a, 7b, 8a and 8b, with new burner management systems (BMS) or modifications to existing BMS to cope with orimulsion.

On natural gas, the emissions limits (as specified in LCPD and Lithuanian regulations) to which the retrofitted plant will have to conform are (at 3% O2): 200 mg/Nm3 for NOx; 35 mg/Nm3 for SO2 + SO3, as SO2; and 5 mg/Nm3 for particulates.

The increases in absolute terms are of course due to the significantly increased load factor envisaged for the plant, with electricity production rising from 724 GWh/a in 2003 to 8400 GWh/a in 2010 and beyond. Orimulsion consumption is also projected to increase from about 465 kt/a before 2010 to 2800 kt/a after.

The project can be seen as an important milestone for Alstom’s Flowpac limestone forced-oxidation FGD technology, which employs an innovative turbulent bubbling bed absorption zone. It is based on a concept originally invented by Kjell Nolin for cost effective scrubbing of flue gases at the oil fired Karlshamn power plant in southern Sweden, and is now being offered commercially by Alstom.

Particular attractions of the Flowpac technology in the Lithuanian case, relative to a spray tower, include its better SO2 collection when inlet concentrations are high, much better efficiency in dealing with SO3, lower power consumption coupled with high overall collection efficiency, greater compactness (requiring a smaller building to house the scrubber) and lower O&M costs.

The first Flowpac was installed at Karlshamn in 1996 downstream of a 340 MW boiler firing high sulphur fuel oil and has since consistently demonstrated collection efficiencies of 99% for SO2 + SO3.

Since then a number of modifications have been made and a second generation version of the Flowpac technology has been developed – with agitators and all but one pump eliminated, along with other significant simplifications and improvements (to be covered in a subsequent article). This improved version is the technology to be installed at Elektrenai and, reassuringly for the Lithuanians, a second generation Flowpac is now successfully operating at Karlshamn, serving a 12 MW auxiliary boiler. This installation has been deliberately designed to be a “slice” of the full scale version, with the same height and length as the units to be installed at Elektrenai, the only difference being the width.

Dealing with the byproducts

One of many challenging aspects of the Alstom turnkey FGD project at Elektrenai (which includes roads, a piece of railway line, and buildings, as well as mechanical and electrical equipment, including booster fans, flue gas reheaters, a common system for all Flowpac limestone and gypsum handling, a 6000t gypsum store, and installations for pneumatic transport of fly ash and its storage) is the logistics of materials handling, with a max limestone consumption of 40 t/h and max water consumption of 480 m3/h. A particular issue to be addressed will be handling the vast amounts of gypsum (albeit “commercial grade”) that will be produced. The byproducts of the dry NID FGD can be used as absorbent in the Flowpac wet FGD units, but once fully operational the Flowpac plants will produce about 110 t/h of gypsum on the high sulphur fuels, orimulsion and HFO.

There is scope for storage of a few years’ output of FGD gypsum in landfill facilities within or close to the Elektrenai power plant site, but the hope is that uses can be found for the gypsum in the manufacture of cement and/or plasterboard. A possible role model for the Lithuanians is Poland, where an FGD-gypsum-based construction materials business was set up essentially from scratch, in partnership with the German plasterboard industry, following commissioning of FGD equipment at the Belchatow power plant in 1994.

The fly ash collected at Elektrenai poses less of a problem. It will be transported off-site and further treated for recovery of metals (vanadium and nickel).

Photograph of the Elektrenai plant
Layout of the Elektrenai plant showing positions of boilers, numbered 1 to 8b, new ESP units and Flowpac wet FGD facilities. At the far right is the already installed NID dry FGD system serving boiler unit 8b. The steam turbines, not shown, are on the farFlow diagram of Flowpac FGD unit for Elektrenai (this shows the scheme for boilers 7a and 7b).
A steam reheater is included downstream of the Flowpac unit. This meant that the original stack did not need to be rebuilt Features of Flowpac, the second generation version, which is to be installed at Elektrenai: turbulent bubbling bed absorption zone – no sneakage, high removal rates; compressed air driven air lift to recycle limestone reagent slurry – no pumps; sloped bot