LCP BREF challenges and opportunities, the view from Wroclaw

Dr Lesley Sloss of the IEA Clean Coal Centre, UK, provides an update from the ExPPERTS conference on emissions reduction, Wroclaw, Poland, 6-7 September 2017. A key focus was addressing challenges stemming from the recently enacted LCP BREF regime for controlling emissions from large combustion plants, in particular mercury and the increasing cost of compliance. 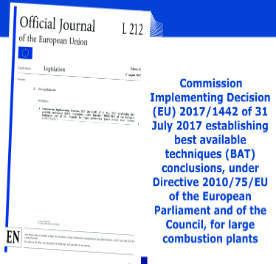 The ExPPERTS (Exploring Power Plant Emissions Reduction – Technologies and Strategies) annual meeting is a mix of updates from the European Commission on new and impending legislation, some reporting of plant experience from utilities, and a number of well-pitched sales talks from sponsors (as noted in last year’s report).

Ian Hodgson, DG Environment, European Commission (EC), gave an update on the LCP (Large Combustion Plant) BREF (Best Available Technology reference document). This essentially establishes the new framework for regulating emissions from large combustion plants (50 MWt or more thermal input) in Europe. The “implementing decision” was finally published in the Official Journal of the European Union on 17 August 2017. All LCP permits in the EU must be updated in line with the new requirements within four years of that date.

Although total emissions of pollutants in Europe have fallen by over 75% between 2004 and 2016, estimated total environmental damage costs from industrial processes in the EU amount to €40- 155 billion annually. So it is not surprising that the EC is setting increasingly stringent emission limits on major sources of air pollution.

BAT (best available techniques) are being specified as part of the Industrial Emissions Directive to guide countries in choosing the most appropriate control measures. Details of the new LCP BREF can be found on the EC website.

Remi Bussac (EDF/Eurelectric) spoke on implementation challenges for operators, summarising the issues for plants with shared stacks, which must comply with a combination of limits relating not only to the total rated thermal input to each stack but also any individual units that plan to derogate under the limited operation option (<1500 h/y). The ELV (emissions limit values) for each plant will be determined by the competent local authority based on the BAT for each plant. This limit must be somewhere in the range of ELVs defined within the BREF but may not necessarily be the lowest value. This may well be where issues arise as plants move towards compliance by 2021. The fact that the official limit is a range, but the exact limit for each plant is decided on a case by case basis by a local entity, will mean that some plants face tighter limits than others and this may be seen as a route to legal opposition to standards in some instances.

Annex V of the BREF has binding “safety net” ELV values for those plants that plan to derogate, which will ensure that plants that plan to close down or “grandfather” (run limited remaining hours) will not be allowed to pollute without some form of limit. Yearly BAT limits will not apply to plants running limited hours but daily BAT limits will apply for days these plants are operating.

Mercury monitoring can be performed with CEMs (continuous emission monitors) but sorbent traps may be acceptable once every 6 months, if plant performance can be proven to be stable.

CEZ Group, in the Czech Republic, has been investing in new coal units (Ledvice power plant commissioned), a new FGD at the Energotrans plant, and retrofitting of a CHP plant. The new BREFs will be challenging for the Czech power sector, not least because of the additional problems for plants firing lignite, for which compliance with mercury emissions is harder due to coal and combustion chemistry. Measurement studies indicate efficient mercury control is possible in some of the lignite plants fitted with wet FGD systems. Mercury CEMs from various suppliers are being tested at some plants, with a SICK Mercem installed on one plant already. The presenter, Pavel Frolka, showed an interesting table summarising compliance issues for the Czech plants and showing the high potential investment costs for plants that intend to comply. Some plants will close and others will derogate, but several plants are being “completely retrofitted” – including SNCR installation, ESP upgrade, and particulate control + SCR retrofit. Plants fitted with ESPs may require upgrading or replacement to comply with the new limits and SCR/SNCR and SOx control systems will also be required. Mercury control presents a major issue as there is no expertise on this within the country. The addition of new legislation complicates management plans for existing plants which struggle to keep up with compliance.

Anja Behnke, of the German Federal Ministry for the Environment, gave an update on mercury control compliance in Germany. The mercury issue in Germany encompasses all media as the Ministry’s aim is move towards zero emissions to the environment. Over 60% of Hg emissions to air in Germany are from the energy industry. CEMs are required on all plants >300 MW except on plants shown to have constant operation values below 50% of the ELV. Around 50% of plants have Hg CEMs installed. The emission limit for Hg is currently still 30 μg/m3 (daily) coming down to 10 μg/m3 from 2019. The new BREF limit will then apply in 2021. Most plants are emitting in the proposed BREF range of 3-7 μg/m3 without additional controls (hard coal plants). Some of the lignite plants, especially those in Rhineland, may also be meeting the 3-7 μg/ m3 limits. Plants in eastern Germany and Lusatia will find it hard to comply and some report mercury emissions of up to 40 μg/m3. Derogations are expected for the more challenged plants. The TA Luft, Germany’s air pollution control regulation, is being completely reviewed in 2017.

Jörg Kerlen of RWE reiterated the concerns of German utilities as to the applicability of the new LCP BREF limits to lignite plants. The arguments are based on the questionable reference data used to calculate BAT AELs (associated emission limits), especially for lignite units, with discrepancies reported between which technologies were considered applicable and which were not. The BAT document does not consider the potential effects of these new control systems on plant performance – slagging and fouling, efficiency and CO2 emissions.

Kerlen argued that the lower range emission limits under the BREF are unproven on European plant configurations, agreeing with the arguments that have been put forward by Alfons Kather, Technische Universität Hamburg–Harburg.

German policy is to limit emissions to all media and therefore increasing mercury in waste streams is considered a problem, especially the potential loss of fly ash or gypsum sales.

The major event sponsor, NALCO, provide solution-based oxidation controls for mercury reduction and this system may have advantages over activated carbon in the imminent European market largely because it maximises co-benefit effects in scrubbing systems (both wet and dry), which will be relatively standard SOx control technologies in European plants. Activated carbon systems tend to work best on fabric filter systems – but the EU has ESPs on over 90% of the installed capacity at the moment. However, the major challenge with cutting and pasting US experience onto the EU will be for lignite plants. Lignite tends to have a higher mercury and lower halogen content and therefore lower oxidised mercury which makes co-benefit effects less favourable. There is also increased mercury in the gypsum byproduct which could be an issue for sales. Nalco reports no negative effects on the byproduct market in the US, however this would need to be confirmed in the European situation.

The round table discussions included some interesting input from the Estonian, Bosnian and Croatian delegates. Clearly these countries see the new BREF limits for 2021 as very challenging and expect to see a lot of derogations and some plant closures. Only one coal plant in Croatia appears to be in compliance with current legislation (although the mercury situation is unclear). The delegates pointed out that European funding money is available for CHP projects for power in major cities in countries such as Estonia but that funding for retrofitting existing plants was harder to come by.

An open discussion on the move towards zero emission plants focussed very heavily on the continued retrofitting of older plants with emission control systems. Although I raised the IEA concept of HELE technologies – the move towards higher efficiency plants with state of the art emissions control – most other delegates agreed that their governments and utilities would continue to “mend their plants with sticking plasters” rather than move to newer, cleaner technologies.

Once again, the focus of a meeting to discuss new legislation affecting coal plants in Europe concentrated largely on mercury as the major challenge, especially for plants firing lignite. Although the BREF limits are now official and the deadline for compliance is 2021, there are likely to be a few more years of argument and delay as several utilities, organisations and national governments continue to oppose the new limits. Countries such as Croatia, Estonia, and Poland, which intend to comply with EU legislation, appear desperate for advice on low cost compliance options especially for mercury which could prove a significant issue at lignite plants. Although the date and location for MEC, the IEA CCC’s annual workshop on mercury and multi-pollutant emissions from coal, has yet to be confirmed for 2018, Poland may well be a timely choice.