Companies across Latin America are announcing agreements, establishing partnerships and embarking on joint ventures in an effort to optimise the region’s vast oil and gas reserves. But are these deals likely to stick, and is the industry fostering enough competition? Elly Earls meets Wood Mackenzie’s Ruaraidh Montgomery, IHS’s Steve de Vito and Ecopetrol’s Nestor Saavedra to find out. 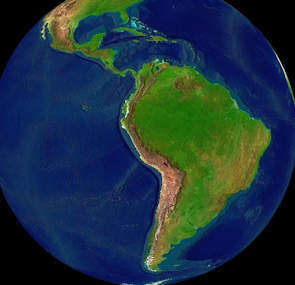 Latin America holds a fifth of the world’s oil, making it the second-largest region in the world in terms of oil reserves, behind the Middle East. But none of the region’s biggest oil players – Argentina, Brazil, Colombia, Ecuador, Mexico, Peru and Venezuela – have the funds, capabilities or technological know-how to develop their impressive resources alone.

Venezuela, which has the greatest oil reserves in the region – 297 billion of the 345 billion barrels that are available for extraction across the region – has invited every country in Latin America and the Caribbean, as well as private multinational corporations, to participate in the exploitation of the Orinoco heavy oil belt. The reserve cuts through more than 50,000km² of the country’s remote interior and is largely responsible for Venezuela’s mammoth stake in the world’s oil reserves.

"Venezuela has the greatest oil reserves in Latin America – 297 billion of the 345 billion barrels across the region."

Since then, PDVSA has established links with Argentina’s YPF and Colombia’s Ecopetrol, and is also hoping to team up with Brazil’s oil and gas power house Petrobras on a refinery project. These agreements will not only be of benefit to Venezuela; countries all over the region are also looking to collaborate in order to exploit the region’s resources as effectively and profitably as possible; for example, the agreement between President Cristina Fernandez of Argentina and former Venezuelan President Hugo Chavez aims to optimise initiatives underway in both countries, as well as developing new projects. So, not only will YPF be incorporated into work on the Orinoco oil belt, but PDVSA will also add to oil and gas projects in Argentina.

Similarly, Colombian state-owned energy company Ecopetrol has announced plans to work alongside PDVSA to revitalise already-developed oilfields in western Venezuela’s oil-rich Lake Maracaibo, and has discussed a proposal with the Venezuelan company to build a pipeline to transport Venezuelan oil to Colombia.

Also, Petrobras wants to work with its Venezuelan counterpart on a refinery joint venture in Brazil in order to share the cost of the project and make use of PDVSA’s considerable expertise in refining.

Latin American relationship: can it work?

These three agreements are only the tip of the iceberg when it comes to partnerships in Latin America; for example, Ecopetrol is also investing heavily in Peru and Brazil. On the face of it, the big players in the Latin American E&P sector are doing everything they can to work together and maximise the region’s vast potential. But are these tacit agreements likely to result in concrete collaborations?

"You get a lot of memorandums of understanding, but they are not legally binding," he says. "They’re nice political statements and they generate some good headlines, but we’ve yet to see anything develop from these verbal statements of intent."

This is reflective of the financial constraints that many state-operated oil companies are facing, Montgomery says.

"There’s not actually much that many of them can do together given their current situation," he explains.

One clear example of this is the fact that PDVSA is yet to fully commit to the Abreu e Lima refinery joint venture with Petrobras.

"Petrobras is driving ahead with the development of the refinery," adds Montgomery. "It’s given PDVSA extensions to start paying its way, but my understanding is that so far this hasn’t materialised."

However, this does not mean that every proposed partnership in Latin America is merely a political statement. Many joint ventures across the region are essential for making specific projects feasible from cost and risk-management perspectives.

"You get companies partnering up on exploration wells and projects, because they want to share the risk and reduce their cost exposure," explains Montgomery. "It’s all part of portfolio management."

Cost of a Petrobras partnership

Looking to the future, agreements like these are likely to become more common, particularly as energy giants begin to explore and develop deepwater regions, which are simply too expensive for one company to take on alone.

"New legislation will grant Petrobras a minimum 30% stake in joint ventures that bid for exploration licences."

Brazil is perhaps the ultimate example of this. Although Petrobras is a deepwater leader globally, and is therefore well positioned to lead the exploration and development of the pre-salt fields where it made its first significant discoveries in 2007, it is essential for the company to partner up so it can share the cost of this development.

"It’s incredibly expensive and Petrobras cannot afford to do it all by itself," Montgomery says. "It’s also useful for the company to share the risk."

Having a few different operators working on the same resource could also serve to speed development.

"Competition is good and different ideas are good," Montgomery says. "So, you want to see some competition – different companies trying out different technologies, strategies and approaches. Having just one company in charge can affect the pace of development. If you spread the operatorship round a bit, you can see things growing."

Yet, the Brazilian Government has restricted the rest of the Latin American oil and gas sector from getting too involved in the pre-salt area, and minimised the opportunity for competition by approving regulations that allow Petrobras to be the sole operator of oilfields where licences have not yet been auctioned. The new legislation will also grant the state-owned oil and gas company a minimum 30% stake in joint ventures that bid for exploration licences.

"Petrobras’s partners can still suggest different ways of doing things and challenge them, but it’s the operator that drives the project," says Montgomery. "This is an issue for companies that want to access Brazil and build business because Petrobras is restricting their opportunities."

Nonetheless, partnerships have been and will continue to be formed in this area, even if they are predominantly financial.

"Petrobras will partner up to share the financial burden and spread the risk," Montgomery says.

For companies with less deepwater experience than Petrobras, however, deeper partnerships – involving technology and knowledge transfer – must be created. Rather than turning to their Latin American counterparts, many firms are looking further afield to find this expertise – to international operating and service companies.

In 2008, the Mexican Congress approved an energy reform package that established the legal framework for integrated E&P contracts to be awarded by national oil company Pemex. So far, contracts have been awarded to Cheiron, Petrofac and Schlumberger, among others, to develop onshore blocks, while Pemex is planning to have further licensing rounds focused on the deep water in Mexico.

"Pemex is only just getting going as a deepwater explorationist, so it makes sense for it to bring in partners that have the in-house technological expertise in how to go about developing these fields from the drilling, subsea and facilities points of view," says Montgomery.

For de Vito, too, these contract rounds are an extremely important development for the industry.

"The new joint ventures created in association with the integrated E&P contract rounds in Mexico between Pemex, and operating and service companies are significant because they represent a new opening for outside E&P investors to work in Mexico," he explains.

"Conferences like LACPEC give an opportunity to improve communication and facilitate talking to companies in different scenarios."

In Latin America, any collaboration begins with a conversation and companies across Latin America are starting to talk to each other more, believes Nestor Saavedra, vice-president of innovation and technology at Ecopetrol. He is also regional director of the Society of Petroleum Engineers for South America and the Caribbean, which regularly holds the Latin American and Caribbean Petroleum Engineering Conference (LACPEC).

"We are getting better communication between countries," he says. "We’re not at the optimum, but things are improving. Conferences like LACPEC give us an opportunity to improve our communication and facilitate talking to companies in different scenarios, after we’ve networked at LACPEC; for example, it is now much easier for us to go to Venezuela and talk with them because we’ve already met at this kind of event."

According to Saavedra, companies across Latin America are also beginning to share more about the challenges they are facing and the opportunities for the industry with their competitors, particularly in the areas of deepwater, heavy oil, mature fields and environmental performance. They’re also talking more about future opportunities for collaboration.

"For example, the service contracts in Mexico can open opportunities for service and national oil companies, so we’re communicating about that in order to get that better collaboration in the future," Saavedra explains.

So, how will the oil and gas sector in Latin America develop over the coming years? As deepwater exploration becomes more important, there will undoubtedly be more partnerships formed, whether they are financially motivated or created out of the necessity for extra technological knowledge. These partnerships are likely to be made up of a mixture of regional and international players, operators and service companies.

But, for de Vito, there is one thing that all Latin American operators must ensure if they are to develop the region’s reserves to their maximum potential.

"It is fundamental that the host country constructs reasonable and competitive contractual terms or they will be the entity that slows down economic development within their own country," he says. "The recognition of a good value proposition and the subsequent competition among multiple industry players to capture the opportunity is what will help develop the region’s oil and gas reserves. Competition is what will do the trick."