Large scale steam-solar hybrids take their place in the sun

Three solar thermal plants being developed in Spain are among a number of power projects worldwide that illustrate how technology innovation is being applied to the growing demand for cleaner energy. Typically a steam turbine is designed to withstand 1500-2000 duty cycles without requiring significant part replacements or repair. For an application such as those described here the duty is higher by an order of magnitude. 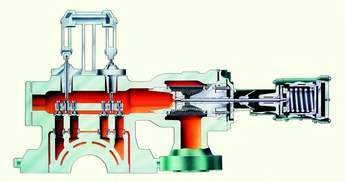 The three plants – Majadras, and Palma Del Rio 1 and 2, located in the provinces of Cáceres and Córdoba in southeastern Spain – will each have a nominal power output of 50 MW, with a net production of electricity estimated at 100 GWh per year, about enough for 20 000 homes.

The projects are being developed by Acciona, a Spanish construction company prominent in the global renewable energy sector, and will feature steam turbine technology provided by GE Oil & Gas. The plants will utilise an arrangement of parabolic trough systems and absorbers to transform the collected energy of solar thermal radiation into superheated steam. This will be fed to a GE steam turbine-generator, operating on a Rankine cycle, to supply peaking power to the grid. Steam turbine technology is the optimum choice when parabolic mirrors are used. Since the primary source is heat, the most logical and convenient way to transform this heat into energy is to produce steam. Furthermore, steam turbines offer the reliability, power capacity and operation flexibility required for these plants.

Factors supporting Acciona’s selection of GE included the company’s broad experience and global resources, and the capability of its technology to meet the key demands of solar plants, namely daily startups, re-heat options, and the customisation of the units for these projects. GE worked closely with Acciona to optimise the thermal cycle of the turbines, to get as close as possible to maximum performance.

The setup cost for each plant falls in the range r200-250 million. Key factors in the selection of the plant sites were the region’s optimum sun conditions, available space and infrastructure support for the solar field.

The subsidy to be paid by the Spanish government under its solar incentive programme will be 0.3-0.4 r/kWh.

As a source of ‘cleaner’ power, the three solar facilities will offset the need for fossil fuel-based energy sources in the region, resulting in a reduction in greenhouse gases equivalent to more than four million tons of CO2 over the life of each power plant.

Steam turbines and the steam cycle

Each site covers cover an area of around 1.6 km2, and will contain more then 18 000 individual receivers. Each plant’s 800 parabolic trough collectors, arranged in parallel rows, cover a rectangular area of 360 000 m2. These collectors concentrate the sun’s radiation into the absorber tubes which are filled with a synthetic heat transfer fluid (HTF), heating it to more than 400ºC. The superheated oil will be used to produce steam that enter the steam turbine at about 370ºC and 100 bar.

Efficiently matching a steam turbine with a solar collector is not straightforward. To achieve safe and efficient operation over many years, the major turbine components in a solar plant must be designed by applying specialised analysis, and by making best use of the supplier’s field experience.

The steam cycle used for these projects is a Rankine cycle in a re-heat configuration. Superheated steam at approximately 370°C (range 350–380°C) is produced by the absorbers, with a two-pass heat exchanger for the re-heat option. This configuration has been carefully optimised to maximise the efficiency of the overall heat balance.

From a conceptual point of view, the steam turbines being used for these three projects are the same as those found in a traditional steam power plant, but are operated in a different way owing to the demands of the solar cycle. Daily start-up and the associated low cycle fatigue present a challenge for operation and maintenance since no other heat sources are empoyed in steam generation. The plant has a small HTF heater but that is mainly dedicated to supporting the highly transient operations of the turbine, for example, the production of steam for the sealing system.

The turbogenerator set is a two-casing arrangement. The high pressure turbine body is connected through a gearbox to the AC generator. Initially, a configuration with a clutch to connect the low pressure (LP) turbine to the generator was analysed but it was decided not to insert this additional element. The LP turbine is a condensing unit, with bleed going to the pre-heaters.

The basic design of these machines consists of an impulse stage followed by reaction stages. An impulse stage with partial arc admission maintains good efficiency over a wide steam flow range, typical of solar plants where the production of steam follows the changing intensity of the sun during the day.

Four hydraulically actuated control valves handle the steam flow and are designed for uniform heating of the casing during the frequent start-up operations. These valves are immediately downstream of the trip valve whose main task is to prevent any major failure of the turbine by stopping the full flow in less then 50 milliseconds.

The external casing is horizontally split, with each half a one-piece steel casting (Figures 2 and 3). The steam chest and inlet flanges are integral with the main casing. The inner casing and the stator blade carrier are cast in the same material as the outer casing. The inner casing and the blade carriers are supported horizontally at the main flange level and are held in position axially by a circumferential groove and laterally by pins. This configuration gives the maximum flexibility in terms of thermal expansion of the casing. Thanks to this arrangement the daily duty cycle can be easily sustained with the maintenance routine described below. The bearings are located in two small casings external to the main casing and can be easily inspected. Furthermore, this location avoids any mixing of oil and steam.

The high-pressure turbine is connected to the generator through a gearbox since it operates at a higher speed than the 50 Hz generator.

The low-pressure turbine in the train is a GE Oil & Gas model SC 2-26 producing approximately 40 MW at normal operating conditions. This condensing turbine is equipped with 26-inch last stage blades of the free standing type. The main design criteria and component arrangements are the same as those described above for the HP units. The main differences are the large exhaust casing connected to the condensing system and the use of high efficiency, three-dimensional blading (Figures 1, 4). Both these units are produced in the GE Oil & Gas plant located in Florence.

The typical reaction design with a large number of stages provides flexibility for tuning and matching with the specific steam conditions. Bleeding and extraction can be tuned to maximise power production.

From a turbine’s point of view, the most critical aspect to be taken into consideration is the huge number of start-ups and shut-downs. These plants will be operating in peak load duty with virtually all the steam produced by harnessing heat from the the sun.

The operating conditions of the machinery proposed for the solar plants engineered by Acciona are very different to the industry standards of mechanical drive and power generation applications. The number of start-ups has been estimated in the order of 15 000 over the life of the plant. More conventional applications are started up much less frequently, in most cases fewer than 50 times per year.

Over a 30 year period of operation, the machinery in conventional applications is subjected to 1500 start-ups compared to the 15 000 of this solar plant design. The number of start-ups is the primary driver of the fatigue life of the turbine components.

Usually a turbine is designed to withstand typically 1500-2000 duty cycles without requiring significant part replacements or repair. This means that the design is robust enough to withstand that level of cyclic loading. For this specific application the duty is higher by an order of magnitude. Therefore the turbine components require special maintenance, repair or replacement. A unit monitoring system is also used to check the residual life of critical components. The following components were identified as the most critical.

Special attention is required because their operation must guarantee the safety of the turbine in case of load rejection. Moving components, seats, the valve itself and the actuator spring are subjected to significant mechanical shock each time the machine is tripped (Figure 5).

The critical areas are the control stage dovetails (rotor and blade), the reaction stage T-root dovetails (blade and rotor), and the closure blade fixing.

The casing is subjected to thermal transient stresses each time the machine is started up. The worst situation is when the machine is started from cold conditions and quickly climbs to a very high temperature. In solar applications, the cooling time is in the range of 8-12 hours (depending on the season), and the steam temperature is well below the casing design limit (the casing is designed for 540°C).

Thermo-mechanical analysis performed on a different casing configuration (larger and with 180°C steam admission) and warmed from cold conditions to 540°C has shown the number of cycles to crack initiation to run as high as several thousand. In solar applications, better performance than this is expected because the turbines will be fed with steam heated to a significantly lower temperature.