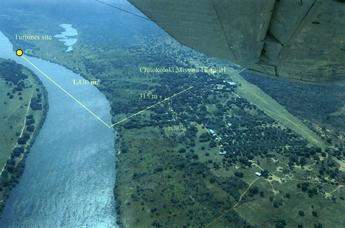 THE Underwater Electric Kite (UEK) system has been designed to operate in ‘stand alone’ stations for small isolated communities, which would presently be served by diesel generators. Developed by UEK Corporation, based in Annapolis, Maryland, US, it can be used in rivers flowing with sufficient water velocity to run this new system in co-generation or as displacement of fuel-operated installations. The system avoids the use of long expensive transmission lines.

The UEK has a ducted turbine design, enhanced by a flared skirt at the end of the short penstock, called an Augmentor ring. The water flow is deflected outward by the Augmentor ring and creates a low pressure immediately behind the turbine. The core of water directly in front of the short penstock is accelerated and is intercepted by the turbine’s blades and discharged into the low pressure at the back of the UEK System. The total flow cross-section reached by the Augmentor ring effect reappears accelerated in front of the turbine. The result is that the existing kinetic energy from the hydraulically affected cross section is converted into electricity.

The idea, under development since 1981, was a commercial product based on low head hydro technology. The challenge was to create similar hydraulic conditions using the same type of modified equipment without a dam. Today, the patented UEK System has the potential to achieve an overall efficiency of 57.1%, realised by using well-known laws of physics and hydrodynamics and its versatility of deployment in site-specific situations.

Attempts to transfer wind technology to underwater windmills that have very poor efficiency and are difficult to outfit with necessary fish and sea bird deterrent are uneconomical, and may not survive without government grant support. In addition, fixed implementation is expensive and difficult to maintain. In large river or ocean settings, currents are often shifting, leaving the unit in unproductive hydraulic paths. UEK Corporation believes it has overcome these concerns.

To liberate the unit of all supporting structures such as bridges, pontoons, pylons or any civil structures, the UEK System is (as a preferred design) formed by two counter-rotating turbines, therefore annulling the torque. A diving apparatus permits the unit to dive at the most efficient depth, reaching the most favourable water velocity core, and the micro processed depth diving system can be overridden manually in order for the unit to surface for maintenance or its replacement.

Practical applications of the system include recovering kinetic energy present in the flume of hydroelectric facilities, spillway water at dams or weirs, and it can also be used in discharge channels from the cooling towers of coal burning and nuclear facilities.

The UEK system in use

This was the first demonstration/test of the UEK System. In 2000, a 3m twin UEK System turbine was installed in the flume of the DeQew hydro station operated by Ontario Power Generation (OPG). This first full size unit, the largest size that can be delivered by trailers on highways without escort, was installed during scheduled plant maintenance and operated over 36 days until the next plant shutdown occurred. The demonstration, according to senior OPG scientist, David Young, was 95% successful.

One year study of a single UEK system between the University of Manitoba, Hydro Manitoba and UEK Corporation

The University of Manitoba, sponsored by Hydro Manitoba and the Canadian government, is to operate a platform mounted single 3m diameter UEK System, installed 300m before the Pointe Dubois hydro power plant, North of Winnipeg, Manitoba. The study will encompass four tasks that respond to the following:

• Is the UEK System impacting the proper functioning of the hydro power plant?

• How does ‘frazil ice’ react on the Augmentor ring, runner composite material?

• How efficient is the fish deterrent system?

• Verify and confirm the efficiency of the system.

This study should lead into system implementation in northern Canada, Alaska and southern Chile.

Development of a UEK park in Geneva, Switzerland

In November 2005, a new company, UEK Instream SA, headed by Managing Director Karl Randall, was formed in Switzerland to develop the first UEK project in Europe: implementation of an undetermined capacity installed in the Rhône river in the City of Geneva.

This project has been well-received by the authorities involved. The Services Industriel de Geneve (SIG) and an Agency of the Swiss Government have combined for another study similar to the Manitoba project to determine what impact, if any, the UEK Systems has on the three facilities operated by SIG from the Seujet to Verbois before the French border. The study is conducted at L’Ecole Polytechnic Federal de Lausane (EPFL) by Professor Anton Schleiss, Director of the Laboratory of Hydraulic Constructions (CHL) at the Swiss Institute of Technology Lausane.

This location, as well as the Verbois site, has great advantages for the UEK System operating risks and reliability, because it benefits from the absence of debris running down the river since the turbines are installed after the existing standard low-head facilities operated by SIG.

The completed park of UEK systems may reach 5MW installed capacity in the near future, depending on capital invested and progress. This project is moving ahead normally and will be executed after the EPFL/CHL study.

In this example, the power generated at the Chitokoloki Mission Hospital situated on Zambia’s Zambezi river consists of three diesel sets generating a total of approximately 100kW serving the hospital, leprosy colony, sanatorium, local school and some habitats. An additional 30kW of power is needed three hours a day to pump water directly from the Zambezi river to a large reservoir serving the complex. The annual operating fuel cost transported from South Africa is close to US$6000. The new installation of two UEK Systems should, at the lowest river water level and velocity (dry season), generate <100kW/hr, 24 hours a day.

Musonda A. Chibulu, Director of Power Rehabilitation Project Engineering at ZESCO Limited has expressed great interest in the Chitokoloki project, which may serve as model for use in the vast hydraulic resources throughout the Republic of Zambia.

This is an expansion project, based on upgrading the present capacity to the requirements of Puerto Leguizamo y La Tagua, which had a deficit of 33.026MW (Diagnostico y situation actual de las ZNI cubiertas por elispse, Anexo 3, Conpes 3108, 3 April 2001).

The conclusion of a UEK Corporation survey at the site, conducted in June 2001, clearly favours the option of the Puerto Leguizamo y La Tagua project to continue on the Caqueta river instead of a proposed change to the Putumayo river. The survey also indicates that a capacity of 10MW on the surveyed stretch is possible. To fulfil 33MW capacity requested above in the ‘diagnostico’ (Table 2), UEK Corporation believes that another investigation/survey further down the Caqueta river may fulfil this added requirement.

The test report shows that at the site finally chosen for the demonstration in La Tagua, Lat. S 00.03.387 and Lon. W 074.40.208 a maximum velocity of 245cm/sec was measured at a depth of 2m. The goal of the survey was met and the implementation of the pilot plan demonstration planned at the Anaconda site will be executed as soon as possible.

Close to Annapolis, Maryland exists a site at the Indian river Inlet, Delaware, that displays the second fastest tidal water velocity in the eastern coast of the US (over seven knots).

The UEK System tidal turbine is designed to operate in both tidal flow directions with the same efficiency as the river turbine’s design. This aims to make implementation easier because of the tidal slack period that helps keep maintenance and installation costs competitive. The tidal system development is currently underway and is based on patents No. 6,139,255 (31 October 2000) and No: US 6,406,251 B1, (granted on 18 June 2002) to Philippe Vauthier and known as ‘Bi-Directional Hydroturbine Assembly For Tidal Deployment’. Ninety percent of the tooling is already manufactured and UEK is ready to build the first unit of this new machine in its Maryland facility.

The Delaware Indian river project is at the preliminary permitting stage at the moment. This development encompasses first the installation of a pilot unit for demonstration purposes, to be followed by the installation of 25 twin Tidal UEK Systems in the inlet representing an agglomerated installed capacity of 10MW. The twin units have a dimension of 3m in diameter x 6.7m width x 3.5m long and will develop 400kW each in a water velocity of seven knots. The capacity factor is ~64% due to the tidal cycle.

The row of 25 twin UEK turbines starts before the end of the jetty, Atlantic side and finishes after the bridge, Indian Bay entrance. The electricity is delivered to a location close to the US Coast Guard station where the DC current is converted in AC/60hz/3 phases and interconnected to the grid perfectly synchronised. Only the amperage is variable. Protective devices mean that the generating side can be disconnected in 0.006/sec in the case of malfunction.

This project is estimated to be completed in less than four years at a cost of approximately US$11M.

Plans for the future

UEK Corporation intends to continue territorial licensing with commensurate considerations or stake in local self managed enterprises. The Maryland team will continue to address surveys, development of site-specific drawings and manufacturing tooling and prototypes for its licensed affiliates.

The company hopes it is posed for accelerated grow with its UEK System technology and intends to participate in the opportunities presented by free flowing rivers, ocean and tidal currents.