Siemens has developed a cloud-based service for the managing of virtual power plants based on its DEMS distributed energy management system. 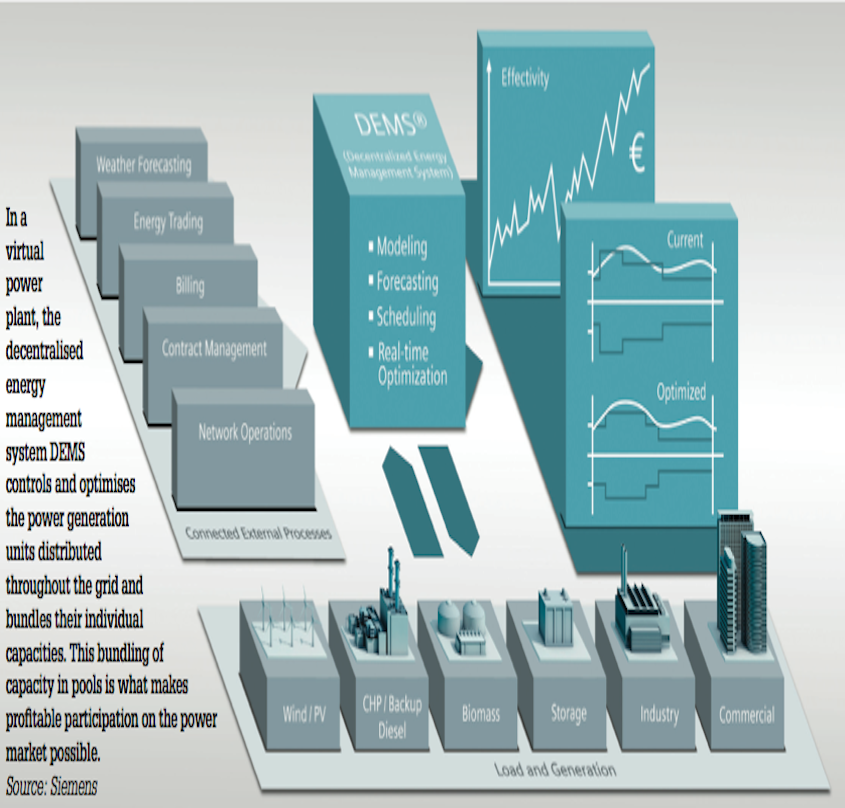 Siemens’ cloud-based solution for virtual power plants is offered as a managed service and is expected to be of particular interest to smaller power providers and municipal utilities. Against the backdrop of the energy transition in Germany, these smaller power providers and utilities have gone over to bundling more and more distributed production units to position the capacity pooled from these in secondary control power, in minute reserve or for direct marketing. Siemens is now providing a solution for this arrangement. Virtual power plants are important tools for the energy transition in Germany – which Siemens believes has now been made somewhat easier by the availability of this cloud-based VPP manager.

The move towards renewables

Germany continues to be a pioneer when it comes to regenerative energy sources. According to the Federal Ministry of Economics and Technology, "renewables" contributed 25.8% to gross power generation in 2014. And the German government continues vigorously to pursue its ambitious goals in expanding power generated from biomass, wind and solar plants. The goal is to produce 40 to 45% of electricity from renewable energy sources by 2025, with this figure increasing to 55 to 60% by 2035. According to a survey by the Fraunhofer Institute for Solar Energy Systems (ISE) in Freiburg, the installed generating capacity for conventional power plants, based on nuclear power, lignite, hard coal and natural gas, totals 82.4 GW, while this figure for renewable energy sources, that is, wind power, solar power, biomass and hydro power, now stands at 82.9 GW. This comparison also illustrates the real extent to which renewable energy has closed the gap in Germany.

The erection of new wind power and photovoltaic plants in particular is a driving force in the transformation of the power supply grid. A large portion, around 97%, of these plants is connected at the distribution network level and poses major challenges for the power grids. In addition to the four national affiliated companies RWE, E.ON, Vattenfall and EnBW, nearly 800 German municipal utilities are also principal players on the German power market and more small power producers, which act on the one hand as producers, and on the other as consumers (so-called ‘prosumers’), are being continually added to the roster.

Because of the increasing number of smaller power producer structures, in which generating units are also completely distributed, new business models are called for. It is against this backdrop that virtual power plants are gaining ever greater significance in Germany. These virtual power plants can be used to co-ordinate the increasing decentralisation of power generation in such a way that all participants in the market can gain the best possible benefits from their participation.

In a virtual power plant, an energy management system, such as the DEMS from Siemens, controls and optimises the power generation units distributed throughout the grid and bundles their individual capacities. This bundling of capacity in pools is what makes profitable participation in the power market possible. Up to now, it has been difficult to economically justify the erection and operating costs for VPPs with low overall capacities. And it is just those small to medium-size municipal utilities which frequently have to do without this control technology and are not able to offer suitable marketing opportunities to those customers with distributed power production facilities.

Siemens believes that it makes access to this future growth technology easier for power providers and municipal utilities with its cloud-based solution for virtual power plants which it offers as a managed service. This service makes a substantial contribution to lowering the barriers for access to the operation of virtual power plants.

Siemens, building on its prominence in the electrification and automation markets, and also on its experience in providing a major solution for an RWE virtual power plant that has been in place since 2008, has now also achieved a smaller scale solution which not only acts as a technology platform, but also as a service portal. Siemens proved the service jointly with RWE, which operates one of the major virtual networks. With the cloud version of DEMS, municipal utilities can generate attractive revenues with their own individual consumption and generation capacities. As partners in a virtual power plant network, municipal utilities can reduce costs for smaller virtual power plants and substantially increase the economic benefits through their access to the energy markets.

The new managed service is expected by Siemens to generate a wide range of benefits for municipal utilities and power providers alike:

¦ It is a sophisticated IT solution with simple scalability and low scope of investment and low risks that is always ‘state of the art’ and up to the latest IT security standards.
¦ There are no personnel or co-ordination expenses for operation and management of theinfrastructure,asSiemenshandlesthe operation, IT security and management of the DEMS portal on its own servers.
¦ It offers short amortisation periods even in the face of rapidly changing regulations and business models.

IT systems and smart-grid technology form the foundation for the new business models that are required. Virtual power plants have in the meantime proven themselves as a business model for direct marketing, balancing energy and inter-day trading. Although the Web service for VPPs is based on DEMS, it operates using only those functions which are absolutely necessary for the actual Web service. This includes the communication interfaces for distributed power generation facilities, production forecasts and aggregate functions, along with a Web portal that operators of the distributed systems can use to update the availabilities of their units connected to the virtual power plant.

DEMS manages renewable energy resources as follows. The system creates a forecast for renewable energy generation and loads or imports a forecast from a service provider. This forecast can be updated several times in a day and depends on variables such as type of day, time, weather conditions and power plant characteristics. With configurable forecast bandwidths, one can determine the reserve and risk strategies for plant operation in advance. Usage for the following day and week can be continuously optimised using this forecast.

After that the ‘online control’ function readjusts the balance of the entire pool with a cycle time of one minute or shorter. The online control includes schedule monitoring, online optimisation, generation management and load management functions.

The schedule monitoring function of the online control monitors various regions, compares target and actual values for generation and consumption of electrical power, regulates energy or power, monitors the minute reserve, responds to requests for reserves and calculates the power corrections.

Load management prioritises load classes, according to standard costs, and rotates load switching, taking into account current load status (on/off, local/remote-controlled). In addition the load management function of online control takes the current load into account when switching off, and takes the rated power, and an increase factor, into consideration when switching on again.

Siemens is now able to supply utilities or energy providers, as a market partner, an IT solution for a virtual power plant as part of a ‘hosted service.’ The generating capacity of the connected distributed energy resources would be marketed directly, and would also be offered in the form of balancing power via the corresponding trading platforms for system service. Siemens is making the required technology (hardware plus its cloud-based DEMS Portal) available in a service centre that the utility accesses via a user interface. Omnetric, a joint venture of Siemens and Accenture, would deliver and operate the infrastructure needed for the system. The offering is aimed at utilities that want to participate in this aggregation network by combining the capacities of other distributed energy resources and taking them to market.

Siemens sees this as offering multiple benefits. First, it is a managed service, one that makes it easier for power suppliers and utilities to get into this promising technology. Second, it constitutes a low-cost solution for utilitiesandgeneratorstooperateavirtual power plant, allowing them to concentrate on the essential core activities of their businesses. That implies acquiring as many distributed and renewable energy resources as possible – including from industrial companies and other utilities – and efficiently integrating them in the energy markets.

Omnetric handles the configuration and operation of the Web service. The technology required for the cloud-based Web service, ie the hardware and the distributed energy management system DEMS SaaS (software as a service) is provided by Siemens in a service centre. The Omnetric Group would be responsible for the configuration and operation of the appropriate solution.