Integrated design on the Marecchia river

The removal of gravel sediments from the Marecchia River near Rimini, Italy, provoked intense channel bottom erosion resulting in a jump of about 15m. Here S Bagli, P Mazzoli, A Pistocchi and D Broccoli report on a study which looked at coupling hydrogeologic hazard mitigation with hydro power development 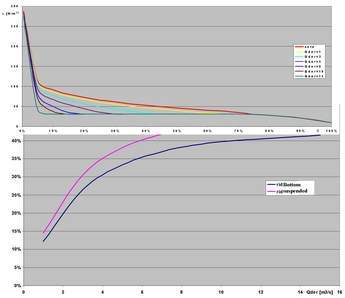 The Marecchia catchment is located in North-Central Italy (Figure 1), at the edges of the Apennines, and outflows in the North Adriatic Sea at Rimini. The catchment is approximately 600km2 wide, with elevations ranging from approximately 1400m asl to 0m asl. Precipitation ranges from 700 to 1100mm/yr on average, from the coast to the Apennines divide. The hydrologic regimes of the catchment show peaks corresponding to the maxima of precipitation in autumn and early spring, mainly as a response to rainfall with minor contribution of snowmelt. In general, flow has high variability and during the dry periods of the year surface discharge is virtually nil. Figure 1, for the sake of illustration, reports the typical patterns of flow duration curves estimated in two different studies (ARPA = RER, 2004; DISTART = DISTART, 2004) for the catchment closed at Ponte Verucchio. An overview of the catchment characteristics can be retrieved from the ‘Piano per l’Assetto Idrogeologico’ (river basin master plan) of the Marecchia-Conca River Basin Authority (Autorita’ di bacino Interregionale marecchia e Conca, 2001), and related catchment planning in accordance to the Water Framework Directive 60/2000/CE, produced by the Regione Emilia Romagna (RER, 2004).

The Marecchia main channel is formed by a wide gravel bed where braided sub-channels form and evolve continuously. Over the last few decades, following the increase in tourism and urbanisation, the gravel has been extracted in large quantities provoking consequences in terms of channel erosion and configured hydrogeological risks due to the presence of infrastructures such as bridge piers and weirs which, on one hand, back-influenced erosional processes and, on the other, were exposed to potential instability and sometimes collapsed. In addition, modifications to the erosional and depositional patterns and the presence of inequilibrated river training works reduced the solid discharges to the coast and contributed to coastal erosion.

This situation led the Emilia Romagna regional government to ban the excavation of material from the river beds during the early 1980’s.

Position of the problem: the Marecchia jump

As a consequence of severe accelerated bed channel erosion, in particular, a channel bottom drop of approximately 15m was formed in a peculiar position, near the closure of the hill catchment, downstream of an existing system of weirs. The peculiarity of this situation is related to the fact that it occurs in the plain, where natural channel slope is already of the order of 0.1 – 1 %. The jump in channel bottom is a dangerous feature as it configures a regressive scour that might undermine the stability of the infrastructures upstream (Figure 2). The evolution of the jump has occurred so far over approximately 10 years (1990-2000), and seems to be quiescent since then as it reached the outcropping of a less erodible rock. Nevertheless, stabilising the situation keeps being a priority of intervention. The issue is discussed in detail in the report of a study produced for the Autorita’ di Bacino by the Department of Civil Engineering (DISTART) of the University of Bologna (DISTART, 2004). Figure 3 shows representative schematics of the cross sections corresponding to the channel bottom jump.

In the situation described above, it has been argued that diverting a significant part of the flows would help to reduce overall transport capacity of the stream and consequently the scouring pace over extended time periods. As the presence of both significant flows and a relevant hydraulic drop suggest hydro power production potentiality, it has been decided to design a water diversion scheme that allowed the beneficial effects of transport capacity reduction to be maximised, while at the same time ensuring good profitability of energy production. A model of transport capacity has been built using a quasi-2D hydraulic model and a wide combination of approaches for the estimation of sediment transport capacity in suspension and at the channel bottom. A thorough discussion of the methodology and results obtained is beyond the scope of the paper and will be the subject of a forthcoming paper; the reader is referred to Seminara and Tubino, 1996, for an overview. The analysis considered the natural flow duration curve of the river, and its potential modifications according to different withdrawal hypotheses. The rule followed to modify the flow duration curves consequently to withdrawal was that a minimum ecological flow requirement was respected, above which all flow was intercepted up to a maximum potentiality. The model was used to simulate the effect of such different modifications of the flow duration curve in terms of annual transport capacity. This allowed for the definition of an optimal withdrawal potentiality of approximately 8m3/sec, above which no significant increment of the transport capacity reduction was observed. This conclusion can be intuitively justified by considering that high flows (i.e. well above the mean annual discharge of approximately 4 m3/sec) have a limited incidence in terms of the overall transport of sediments across the river stretch, due to their short duration and the backwater effects arising from high flows downstream of the jump. On the other hand, flows of intermediate intensity (> 1m3/sec) on an annual basis build up the majority of the transport capacity.

The analysis can be performed for different cross sections, and with reference to different equivalent grain particle diameters for the bottom material. According to the DISTART, 2004 study, a diameter of 0.1 mm was deemed representative although the analysis has been subjected to sensitivity assessment for different diameters.

In general, it can be stated that the withdrawal potentiality of approximately 8m3/sec allows the reduction of transport capacity on a yearly basis of about 40%, while additional withdrawal is not relevant. Figure 4 presents example graphs with reference to a cross section in the stretch interested by the study.

Although it is not possible to convert these figures into a mechanistic prediction of channel landform evolution and scour speed in the future, the analysis provides strong evidence that the strategy of water withdrawal configures a tool to reduce scour in the stretch of river under consideration. This should eventually lead to the stabilisation of the channel, also thanks to the improved sediment transport coming from upstream as a consequence of the banning of channel bottom excavations during the last 25 years.

For this reason, it has been decided to perform a feasibility study on hydro power development, as summarised in the following section.

The jump of about 15m in the channel bottom, and the presence of weirs upstream of the reach of interest, allow a net hydraulic drop of 20m to be exploited for energy production. The flow duration curves for the area of interest, and the ecological flow requirements, are available through the documents of the river basin masterplanning (RER, 2004). A design discharge of 7.4m3/sec has been adopted as a basis for subsequent calculations.

The characteristics of the site suggested a scheme utilising Kaplan turbines should be adopted, for which the following figures have been estimated:

Figure 5 summarises the hydrologic and production variables that support the evaluation. It is of interest to note that the quick pay-back period is supportive of the investment even if a reduction in the hydraulic jump due to reduced transport capacity is foreseen. In general, the times of recovery of the channel towards a new morphologic equilibrium are compatible with the investment profitability.

Under the environmental perspective, the main concern of the development is in terms of riverine habitat modification. The design discharge corresponds to a large share of the yearly flows and substantially modifies the hydroecological regime of the reach. However, it must be observed that the modifications affect only a short stretch of the river (approximately 1000m), and the stretch under consideration is already virtually impermeable to fish migration, and does not represent a critical habitat for preservation.

Additionally, the margins of the investment warrant adequate availability of funds to implement a plan of ecological restoration measures that would improve the habitat and fish passage.

The case study presented here demonstrates how a carefully designed small hydro power plant can be thought of as a multi-objective tool for river management. The peculiarity of the situation allowed for the development of water withdrawal as a means of scour control, and the economic feasibility and profitability of the plant allows us to envisage hydro power development as a strategy to generate funding for river restoration, besides mere entrepreneurial revenues.

It is the opinion of the authors that coupling the hydrologic, hydraulic and ecologic understanding of rivers with clean energy production design may enhance our capabilities to detect situations where hydro power development is not only sustainable, but also helps a general management of river systems.