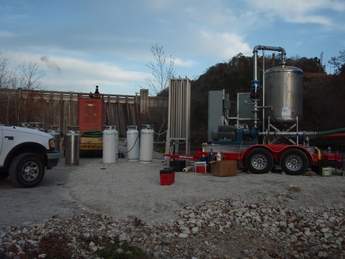 The patented and patents pending Supersaturated Dissolved Oxygen (SDOX) delivery technology from Arkansas, US-based BlueInGreen is a different approach to adding dissolved oxygen (DO) to water (Figure 1). The system – based on technology originally developed at the University of Arkansas – removes a side-stream of water from the river and passes it through a saturation vessel where oxygen gas and water are mixed under ideal conditions such that oxygen is immediately dissolved in the water stream at a concentration of around 350 mg/L or more. This supersaturated side stream of water is continuously added back into the river and is broadly mixed to provide any target DO concentration that is desired (up to saturation).

BlueInGreen was awarded a Small Business Innovation Research (SBIR) grant from the National Science Foundation (NSF) back in the Spring of 2008 to demonstrate the SDOX oxygen injection system for improving environmental water quality. One of the demonstration projects undertaken as part of the NSF grant was to inject DO into the North Fork River which is formed by the release of water from Norfork Dam in Baxter County, Arkansas (Figure 2). Norfork Dam, operated by the US Army Corps of Engineers (USACE), is a multi-purpose project for control of floods and generation of hydroelectric power – the project has a rated capacity of 80.5MW, generated by two 40.25MW turbines.

Several different flow rates of water through the dam can occur ranging from low flow conditions of around 75ft3/sec (2m3/sec) to a maximum generation flow rate of 7000ft3/sec (1981m3/sec).

The North Fork River is 303(d) listed by the Arkansas Department of Environmental Quality (ADEQ) for having low DO (below 6 mg/L). Releasing water from the anoxic hypolimnion of Lake Norfork causes the low DO in the river. This problem typically occurs seasonally in August through November as warm water from summer heating settles on top of the lake and blocks cold bottom waters from circulating to the surface, thereby cutting off the source of oxygen. Since the bottom waters have no access to oxygen, the DO that is consumed by living matter in the water and sediment is not replaced which results in anoxic conditions. The water intake for the dam is located in this anoxic region, so the river formed by the water exiting the dam is low in DO from late summer through November. A lack of DO in water adversely affects fish health and can cause fish kills in the trout population in the river. The North Fork River is a popular location for fishing, and the tourism dollars associated with fishing have a very large impact on the local economy. Not only are the trout in the river threatened during seasonal periods of low DO, but also additional trout cannot be stocked. The low DO problem surrounding Norfork Dam has been studied and discussed for more than 20 years, and several small-scale solutions have been explored, but the fundamental problem of low DO in the river remains. Several groups that have a strong interest in solving this problem include USACE, Southwestern Power Administration (SWPA), Arkansas Game and Fish Commission (AGFC), Norfork National Fish Hatchery (NNFH), ADEQ, local chambers of commerce, recreational fishing organizations, as well as state and federal political leaders.

BlueInGreen built the largest SDOX that could be afforded through the grant funds awarded. The goal of this test injection was to determine the parameters required to design an SDOX system for treating generation flows released from the dam. For the tests, non-generation flows through the dam of 75ft3/sec (2m3/sec) were provided by USACE throughout the nine day study period in November 2008. Pulsing flow averaging 960ft3/sec (27.2m3/sec) was conducted twice daily for a period of one hour per pulse. DO injection was conducted on the river side of the dam (Figure 3) because of several ecological and economic advantages over DO injection into the lake.

Since the SDOX technology adds DO as a pre-dissolved stream of water with no gas bubbles or off-gassing, there is no minimum requirement for water depth to attain high oxygen utilization efficiency. The absence of off-gassing makes treatment of the relatively shallow river water economically feasible. Treatment of the river saves operating costs as only the water being released through the dam is treated and DO addition matches flow rate. The rate of DO addition is metered in real-time based on input from a downstream DO sensor and assures that the minimum DO requirements of the tailrace are continuously met under all operating conditions. Under this scenario, operation of the dam is freed from tailrace DO constraints and is based solely on efficiency of power generation and flood control.

Competing DO delivery technologies based on bubble aeration require significant water depth in order to dissolve bubbles before they rise through the water column and exit the anoxic hypolimnion. This makes bubble aeration economically feasible only on the lake side of the dam and results in the formation of a plume of DO in the forebay. Operation of the dam under this scenario must consider the size of the DO plume when releasing water for flood control and power generation. Furthermore, the attraction of fish (such as striped bass) to the DO plume has resulted in fishing restrictions in some lakes using bubble aeration to remediate low DO.

A summary of findings from the tests of SDOX treatment of the North Fork River is provided below:

• The average DO rise produced throughout the experiment was 1.15mg/L once natural stream reaeration was removed.

• The DO delivery rate measured in the river was calculated to be 1152lb/day with a corresponding oxygen use rate of 1209lb/day resulting in an oxygen delivery efficiency of 95% (oxygen consumed that was delivered as DO).

• The untreated section of the North Fork River below Dry Run Creek exceeded a DO of 6 mg/L 33% of the non-pulsing operation time (Figure 4 top).

• An SDOX unit 65% larger in capacity than the unit used during the test would have maintained a DO in the river (at low flow) exceeding 6 mg/L for the entire testing period.

• Based on the design parameters obtained through these tests, SDOX units were sized for varying flow rate scenarios.

Conclusions of the study are that injection of DO on river side of dam was successfully conducted for the study period of one-week. The SDOX was able to add DO to the river with the same high oxygen utilization efficiency (95%) as measured with smaller units in wastewater treatment plants. The SDOX unit used for this study was undersized for maintaining a DO of 6 mg/L continually at low flow in the North Fork River, but was able to increase the time the river exceeded DO requirements from 33% to 83%. SDOX DO injection is a feasible solution to the chronic low DO problem in the North Fork River.

BlueInGreen is currently seeking opportunities to install a full scale unit in the North Fork River. Once the full-scale unit is installed parameters such as yearly average operating costs and increases in power generation and flood control efficiency will be measured and compared to published data regarding fine bubble diffusion systems. The full-scale unit will allow for maximum efficiency in power generation and flood control while maintaining state mandated water quality requirements at a wide range of flow rates.