Increasing the flexibility of IGCC

A recent study funded by EPRI looks at the operational characteristics achievable by using the latest fast-ramping gas turbine technology in conjunction with IGCC (integrated gasification combined cycle). This promises a way for even coal- fuelled plants to achieve a high level of operational flexibility. 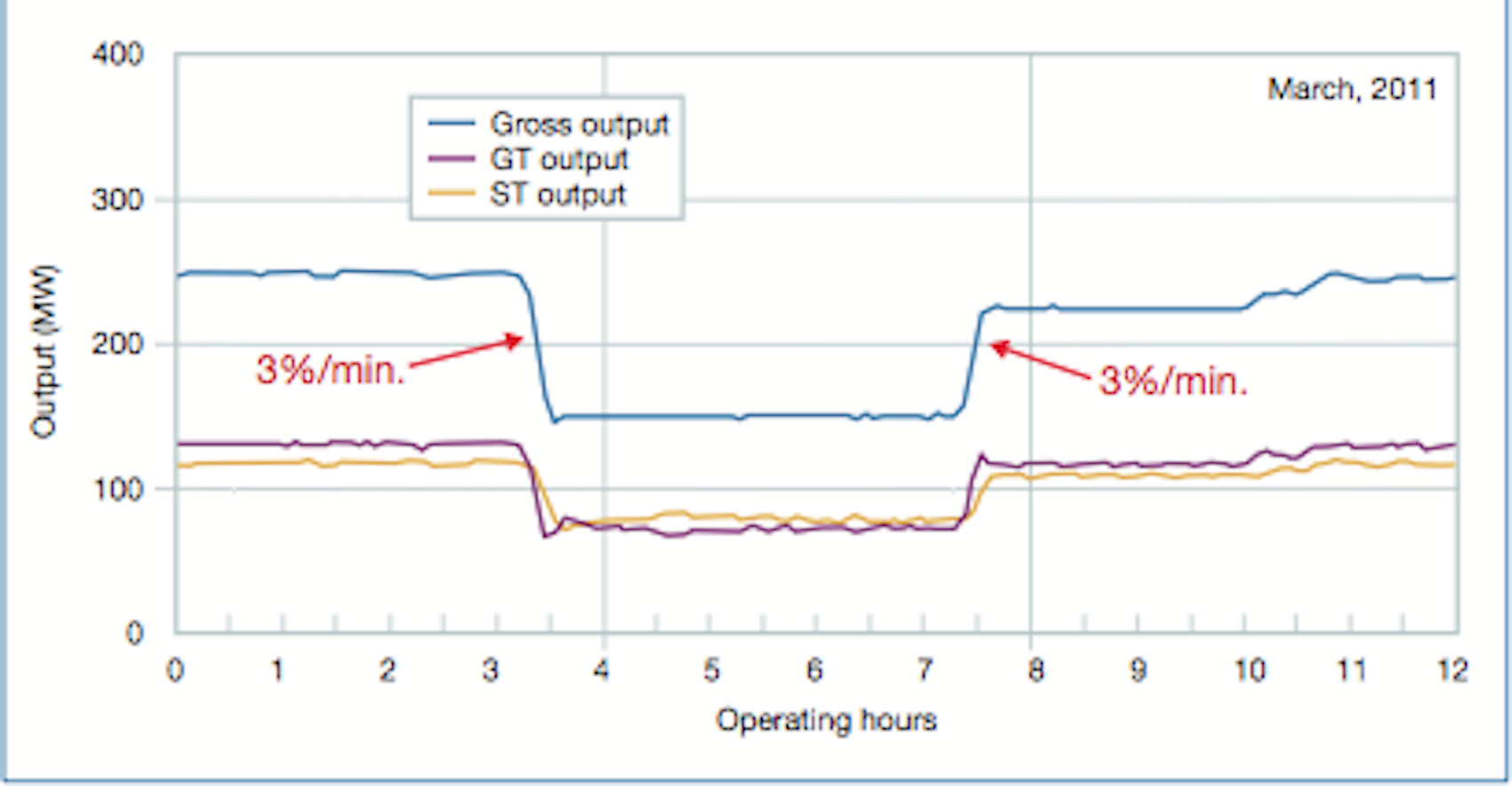 The increasing penetration of intermittent sources of renewable energy such as wind and solar into the energy mix places an increasing demand on fossil-fueled power plants to meet the flexibility requirements necessary to maintain stability of the electrical grid.

An integrated gasification combined cycle (IGCC) is unique among solid fossil fuel technology plants in being able to leverage current enhancements in and future extensions of component technologies, with resulting potential for significant contributions in the area of operational flexibility. Newly developed, state-of-the-art gas turbines and natural gas combined cycle (NGCC) plants can use their ability to turn down or up or start and stop quickly as more renewable energy is integrated into the grid. An EPRI report (J Marasigan, D Todd, J Sorensen, C Higman, D Kubek, Design options for enhancing IGCC flexible operations performance and economics, Report 30020037420, EPRI, Palo Alto, CA) has investigated how an IGCC can use these fast start combined cycles to perform with ramp rates close or equal to the natural gas components, creating system flexibility even for coal resources.

Current accepted ramping capability for syngas plants is considered to be about 3% load/minute. The Nakoso IGCC plant demonstrated this capability as part of its test programme as shown in Figure 1.

However, existing syngas plants, whether for power or chemical applications, have all been designed for base load type operation, so that capability beyond this is generally unproven. The EPRI report referred to above also included a review of the potential for improvement.

For the purposes of the study, ramp rates for a 750 MW GE 7HA 2×1 combined cycle plant (formerly known as FlexEfficiency 60), shown in Figure 2, have been used as a basis. Assuming the gas turbines are 2/3 of net plant output and that the heat recovery steam generators follow the gas turbine, producing steam in less than 10 minutes while the steam turbine uses a full steam bypass to catch up, one can calculate the rates of power production on an approximate basis.

The air separation unit is often seen as a limitation on ramp rates for IGCC applications. However integrating liquid oxygen and liquid nitrogen storage into the control system for oxygen supply to the gasification unit can overcome this.

Existing gasifiers have generally not been designed for rapid response. Reported ramp rates over the range 50% to 100% vary to someextentaccordingtothetypeofgasifier, but are typically in the range 3-3.5%/min.

However, there is little that is inherently limiting on improvements to ramping characteristics between, say, 50% and 100%, since there is no change in temperature or pressure. But only a small deviation in the oxygen/carbon (O/C) ratio can create a substantial change in the operation temperature and this means that considerable care is required to ensure that controls for rapid response do not disturb the O/C ratio.

Discussion with gasification technology suppliers makes it clear that an improvement in response rate compared with existing gasifier experience is possible. The current difficulty is quantifying how much improvement various enhancements will bring. This will probably only be possible with a clearly targeted study involving at least one, probably two, suppliers.

Given that ramping limitations on an ASU can be overcome by use of liquid product storage, the acid gas removal (AGR) unit is currently perceived as the principle bottleneck to enhanced ramping capability for IGCC. Practical experience in plants with multiple gasifiers feeding a common AGR shows that an almost instantaneous ramp down from 100% to 50% can be managed without loss of syngas quality.

Ramping up at rates over about 2-3% per minute, is the real limitation, since at higher ramp rates there is a serious risk of losing syngas quality. This is undesirable in a power plant, but in a chemical plant, it can lead to an immediate shutdown of the chemical synthesis production unit, since the H2S is a catalyst poison. However, in chemical plants, there is generally no incentive to increase the ramp rate beyond this, so operators tend to be conservative.

EPRI has recently investigated this phenomenon together with the Technical University of Darmstadt with a view to enabling the conceptual development of a Rapid Response Absorber – initially by dynamic simulation. This work has provided an understanding of the transient in the absorber and allowed the development of a control scheme to compensate it. Details will be published shortly at the International Freiberg Conference on XtL and IGCC Technologies in Cologne.

The main concern for CO shift is the change of temperature profile in the bed while ramping. Occasional rapid turndown from 100% to 50% is not a problem as demonstrated in units fed from two gasifiers, but the possible impact on the catalyst if such ramping is performed on a regular basis needs addressing. The use of an isothermal reactor instead of the usual adiabatic reactor with intercooling offers a potential solution.

In order to illustrate the concepts described earlier in this article, a study was carried out to review the expected ramping performance of a nominal 750 MWe (net) IGCC from 50% to 100% load to allow comparison with the GE 750 MW 2×1 7HA based NGCC plant, which has been used as the basis for data for the combined cycle.

Two different performance scenarios are considered for the syngas supply – one using standard, current technology (3%/ min.) and one using syngas technologies specifically enhanced for improved (5%/min) ramping performance. Each of these has been calculated with and without natural gas boost.

Natural gas boost is the short-term addition of natural gas (or other storable fuel such as LPG or methanol) to the GT fuel supply in order to improve the overall IGCC ramping performance beyond the limitation of syngas ramping by exploiting the available performance of the combined cycle unit.

The power balance at the start and finish of the ramp is listed in Table 1. Allowance has been made in the 50% load data for lower efficiencies at various points in the plant.

The five performance scenarios considered are shown in Figure 3.

– The NGCC ramps up to 700 MWe in 3 minutes. At this point the GT has reached its maximum load. Ramping up the steam turbine is slower, so that 750 MWe is reached in 5.2 minutes.

– With the improved syngas ramp rate of 5%/min, it would require 6.5 minutes to ramp up from 375 MWe to 775 MWe. In fact, after six minutes the output would already have reached 724 MWe. The slower ramp rate to full load is attributable to a combination of the slower steam cycle and the increasing auxiliary load.

– The use of natural gas boosting can improve the initial performance further, reaching over 700 MWe in 4.75 to 5.75 minutes.
– A surprising feature of this analysis is that the IGCC plant reaches 750 MW net output slightly faster than the NGCC plant. This is attributable to the 14% larger combustion turbine used in the IGCC facility (573 MW compared with 500 MW). These effects can be seen in more detail in Figure 4. In both the NGCC and IGCC case, the fastest ramping component is the combustion turbine. In the NGCC plant, it has reached its maximum load after 3 minutes. In the IGCC plant the GT continues ramping up for another minute, while the internal consumption, dominated by the ASU, has not built up at anything like the rate that the NG- boosted GT can achieve.

Our overall conclusion is that natural gas boosting can allow coal-based IGCC power plants to reach NGCC ramping performance. Potential improvements to the main process units have been identified that offer significant improvement.

The authors wish to thank the Electric Power Research Institute, which funded the work for the study described. This article is based on a paper given to the 7th International Conference on Clean Coal Technologies, Kraków, Poland, 17-21 May, 2015.