Efficiency measurements of a Kaplan turbine model with a variable straight diffuser angle have been performed for angles varying from 5° to 19° at the laboratory of Vattenfall, Älvkarleby in Sweden. Michel Cervantes and Sebastian Videhult report that the results indicate a significant efficiency gain compared to conventional design for normalised discharge above 85%, up to 0.6% 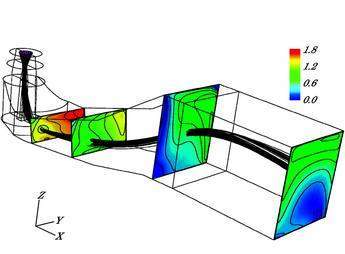 The deregulation of electric markets as well as the introduction of renewable sources of energy such as wind and wave power in several countries has lead to a demand for different operating patterns of hydro power plants. Hydro plants are more frequently operated away from best efficiency, at part-load or full-load, and with an increased number of start-ups and shutdowns. These new market conditions involve new constraints for the hydro machines, which can lead to an overall un-optimised utilisation. An example of this is Sweden, where hydro plants mainly operate Francis and Kaplan turbines built between 1950 and 1970. As a result, an extensive period of renovation has started in the country. New machines need to be designed to take into account the new market conditions.

Operating hydro power machines away from best efficiency involves larger losses, especially for Francis turbines which have fixed runner blades. Kaplan turbines have high efficiency over a broader load range due to the adjustable blade angle, which adds an additional degree of freedom to the turbine. One other way to further increase the efficiency over the whole load range is to introduce an additional degree of freedom, which may allow a substantial decrease of the losses as a function of the load. The majority of the hydro power installations in Sweden are in the lower head range, where Kaplan turbines are generally used. The influence of the draft tube performance in low head turbines is significant compared to the overall performance of the turbine; up to 50% of the losses. Consequently, it is important to to improve the performance of the draft tube. Elbow draft tubes are extensively used on large machines in Sweden and will therefore be considered in the following paragraphs (see Figure 1).

Higher loads involve higher flow rates and thus higher velocity. Since losses are proportional to the square of the velocity, losses increase rapidly. Furthermore the rest swirl is expected to be of importance. On the other hand, lower loads involve lower velocity and certainly lower swirl. Therefore, an optimum draft tube should be active to satisfy a large range of flow rates. One solution is the introduction of a new degree of freedom, which should allow a more efficient pressure recovery as a function of the load. Variable straight diffuser angle as a function of the load is an attractive alternative since it may allow for an efficient pressure recovery by taking advantage of rest swirl. Today, the total angle of a straight diffuser is generally found between 9° and 12° [4].

The present work presents efficiency measurements on a Kaplan model with a variable straight diffuser draft tube bottom floor varying from 5° to 19°, i.e. an inlet-outlet area ratio ranging from 0.17 to 0.31.

The experiments were performed at the hydraulic laboratory of Vattenfall in Älvkarleby, Sweden. The laboratory fulfils all requirements stated in international codes and standards regarding model turbine tests. It can therefore be used for complete model acceptance tests of hydraulic turbines and pumps including cavitation tests.

The test rig and its performances have been described in detail by Marcinkiewicz and Svensson [5] (see Figure 2). The total inaccuracy of efficiency measurements was estimated to ±0.18% and the precision to ±0.1%. The main sources of inaccuracy are:

After the present measurements, a renovation of the test rig was undertaken. The objectives of the renovation were to allow time dependent studies by improving the measurement system.

The Kaplan model of the research and development unit U9 at Porjus Hydropower Centre was used for the measurements. The model runner has a diameter of 500mm. Porjus U9 is a full-scale 10MW machine exclusively dedicated to research and development [6-15]. The Porjus U9 unit is equipped with six runner blades, 20 guide vanes and 18 stay vanes. The runner has a diameter of 1550mm, positioned 7m below the tailwater and rotates with a frequency of 10Hz. The generator is of Powerformer type, which generates and exports electricity directly to the grid without the need for medium voltage switchgear and step-up transformer, allowing a higher efficiency.

Measurements of the efficiency for bottom floor angle varying from 5° to 19° every 2° were performed for four runner blade angles: -4°, 0°, +4° and +8°. The bottom floor immediately after the elbow is adjustable (see Figure 3). A variation of 2° corresponds to an increase of 12% of the outlet area. The different angles investigated correspond to an area ratio between 0.17 and 0.31. The measurements were taken in a random order. A standard program from GE Energy was used to process the data, i.e. determining the runner combination curves.

The average value and standard deviation of the relevant parameters during the measurements are presented in Table 1.

Figure 4 represents the normalised efficiency function of the normalised discharge for the different bottom floor angles investigated. The experimental data as well as the interpolated curves are represented. The results are split in two graphs for simplicity; results for angles between 5° and 13° are presented in the left graph, while the right graph presents the results for angles between 13° and 19°.

The efficiency increases steadily for angles up to 17°. Best efficiency is obtained for an angle larger than the one conventionally used, usually between 9° and 12°, indicating a conservative design from the turbine suppliers. For 19°, a drop in the efficiency is observed for a normalised discharge of about 70%. The reason may be attributed to separation in the straight diffuser due to insufficient swirl.

Efficiency measurements of a Kaplan model with a variable straight diffuser angle have been performed for angles varying from 5° to 19°, i.e. an inlet-outlet area ratio ranging from 0.17 to 0.31. The results indicate the possibility of increasing efficiency compared to conventional design. A significant gain is obtained for normalised discharge above 85%; the gain is up to 0.6% compared to a conventional angle of 11°. Larger angles were not tested for discharges above 80%. However, larger gains are expected.

The present tests were performed with a constant n11, i.e. a constant rotational speed and head. In practice, the introduction of a variable straight diffuser bottom angle will require more extensive model tests. These tests have to systematically investigate the different combinations of n11, Q11 (Q/D2vH) and the straight diffuser bottom angle to discover optimum efficiency.

The results were obtained on a model. Therefore, the gains on the corresponding prototype are expected to be more significant, since model and prototype do not run in similar dynamic conditions. The amount of swirl at the outlet of the runner may be different between the model and prototype. Tests are planned in the near future on the full-scale research and development unit U9 at Porjus, Jokkmokk, Sweden, to answer this question.

Due to the design of the model draft tube, the variation of the straight diffuser angle was easy to accomplish and the results were positive. However, most of the pressure recovery occurs in the conical diffuser immediately after the runner. An investigation of the possibility to introduce a new degree of freedom in this region may be of great interest.

The authors are grateful to S. Leonsson at GE Energy and N. Dahlbäck, U. Andersson and C-M. Högström at Vattenfall for valuable discussions.