Mayo B hydro project is a perfect example of how Canada is well positioned to be a clean energy superpower, according to Prime Minister Stephen Harper. Yukon Energy demonstrates how hydro enhancements at existing facilities can help fulfil increasing demands for renewables. Suzanne Pritchard reports. 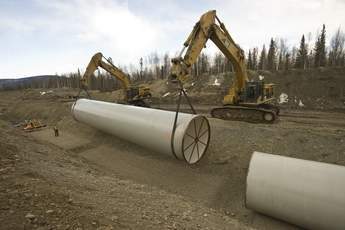 Power demands in the Canadian territory of Yukon are increasing. Even though electrical utility Yukon Energy’s three hydropower plants could generate 75MW, it had anticipated that beyond 2011 more power would still be required. Rather than just serving increasing loads with diesel, Yukon Energy seized the opportunity to expand on its renewable energy supplies. Its first priority for developing renewables, the company stated, would be through the enhancement of its existing hydro facilities.

One such plan was the Mayo Hydro Enhancement Project, known as Mayo B. Through the expansion of the existing 5MW Mayo A facility, power generation from the Mayo river has been increased to 15MW. In addition it will help reduce the future need for running diesel, as well as enable Yukoners to offset greenhouse gas emission of up to 28,000 tonnes a year.

“It’s our job to provide Yukoners with enough clean, affordable and reliable electricity to keep the lights on and businesses thriving,” said Yukon Energy president David Morrison. “Mayo B fits that mandate. It enhances our existing hydro infrastructure, supplies additional clean energy and has a small environmental footprint.”

The Mayo hydro facility has served people in the central Yukon community since 1951. It was originally developed to supply electricity to the United Keno Hill Mine at Elsa, located about 45km north of Mayo. The plant typically operated at full capacity and the storage range at Mayo Lake was largely used each year. However, upon closure of the mine in 1989, the plant only generated local loads in Mayo and Keno until the Mayo-Dawson transmission line was energised in 2003. Subsequently power also became available for Dawson and Stewart Crossing. Nonetheless the hydro facility, which had an annual generation capability of just over 40GWh each year, was still operating below its full capacity.

The original Mayo A facility consists of a 32m high earthen dam which created Wareham Lake. From here water passes through an intake structure and a 0.5km tunnel to the powerhouse which is located on the Mayo river. It houses two 2.7MW generating units which operate with a head of 36m.

Approximately 50km upstream of Wareham Lake is the Mayo Lake water storage dam. This 6m high rock filled wooden structure, which was rebuilt in 1989, provides the ability to control the level of Mayo Lake within a licensed range subject to minimum flow releases. Yukon Energy is permitted to draw down water by 2.5m, which it typically does in the winter for more power generation.

Construction of Mayo B was considered a viable plan. From a funding perspective it was made affordable by contributions from the federal and Yukon governments, along with financial investment by the First Nation of Nacho Nyak Dun.

Water availability was also not a problem. Unlike some hydro plants in the Yukon, the large storage capacity of Lake Mayo has meant that the Mayo system has never experienced water shortages. Indeed, between 1989 and 1993 (before the Mayo-Dawson transmission line was built) almost 80% of generating capacity was spilled over Wareham lake dam.

“The Mayo B facility is a perfect example of how Canada is well positioned to be a clean energy superpower for decades to come,” Canadian Prime Minister Stephen Harper said when touring the Mayo B facility in August 2009. “By investing in upgrades to this hydro plant today, we are creating jobs, protecting the environment and ensuring a more reliable supply of electricity for families and businesses in Canada’s North.”

Construction of Mayo B started in June 2010, with construction contracts being awarded to Peter Kiewit Sons Co. Yukon Energy believed that involving a construction company early on in the process would help minimise risks with associated costs and schedules, so it had actually hired Kiewit in 2009 to help with the planning and design of Mayo B. And as Yukon found ‘Kiewit’s input and expertise to be invaluable to the advancement of the project’, continued working with them during construction.

The construction work involved building a second powerhouse 3km downstream from the existing one, and it is now home for two of ABB’s 5MW Francis turbines. A new penstock system also links the new powerhouse and Wareham Lake. More than 200 pieces of penstock, each more than 18m long and 3m in diameter, were required. These were fabricated in China, shipped to Vancouver and then transported piece by piece to the Mayo site. No changes were required at Wareham Lake or dam.

Mayo B also included construction of phase 2 of the Carmacks to Stewart Crossing transmission line. This was a major project for Yukon Energy and involved building a new 172km long, 138kv transmission line from Carmacks to Stewart Crossing in the Central Yukon. By connecting the company’s northern and southern grids it has given the company the ability to manage its power more effectively.

Stage 1 of the project, from Carmacks to Pelly Crossing and a spur to the Minto mine, was completed and energised in November 2008. The mine and the community of Pelly Crossing can now be supplied with surplus hydro power (previously both were on diesel, leading to reductions in greenhouse gas emissions of between 25,000 and 30,000 tonnes per year. Stage 2 of the line, from Pelly Crossing to Stewart Crossing, was completed in June 2011.

Mayo B started to feed power into Yukon Energy’s transmission system at the end of 2011, ahead of schedule.”‘This project was made possible because of a monumental effort by a great many people, and Yukon Energy would like to thank everyone involved, including staff, consultants and contractors. We are extremely pleased with the quality of work of our main contractor, Kiewit,” says Janet Patterson, communications supervisor at Yukon Energy Corporation.

“Mayo B created more than 60 direct jobs for Yukoners and provided spin-off benefits to approximately 120 Yukon businesses. The utility estimates that close to C$12M was spent in Yukon as a result of this project including labour, materials and supplies. Of that amount, close to C$2M was spent in Mayo itself,” Patterson adds. “The Mayo B hydroelectric project created local jobs and economic growth and will provide the entire territory with a clean source of renewable energy for many years to come.”

Yukon Energy and Kiewit worked with the First Nation of NaCho Nyak Dun (NND) and the community of Mayo to provide local employment and business opportunities during the construction of Mayo B. The utility has also signed a project benefits agreement with the First Nation which provides them with a long term source of income through an investment opportunity equal to 25% ownership of Mayo B. In addition Yukon Energy contributed C$100,000 to NND, with future payments anticipated.

Senior Vice president of Peter Kiewit Sons Co, Greg Dixon, said that the company was extremely pleased to have worked with Yukon Energy on Mayo B.

“Yukon Energy has developed a unique alliance contracting model that has created a strong working partnership between Kiewit, the local community of Mayo, the First Nation of Nacho Nyak Dun and the energy company,” he says. “The traditional bid-build contracting model has been challenging on complex hydro projects and Yukon Energy should be commended for its strong leadership in promoting this new and exciting approach.”

On 16 January 2012, Janet Patterson reported that Yukon Energy was producing almost 80MW of power. “We haven’t seen those kinds of numbers since the Faro mine was in production in the late 1990s,” she said.

“But the good news,” Patterson added, “is that because we are running our new Mayo B powerhouse, plus the new hydro generator at the Aishihik plant, we are only having to use diesel to generate about 6MW of power. Without these two renewable projects, we’d be faced with generating more than 15MW of diesel-generated power.”

Aishihik is a 30MW plant which was built in 1975 to serve growing power demands in Whitehorse and the large lead-zinc mine of Faro. Yukon Energy recently added a third 7MW turbine to the existing 2x15MW station. It has been estimated that this will save the utility C$1.2M or more each year in diesel costs, as well as reducing annual greenhouse gas emissions by 3800 tonnes.

Another of Yukon Energy’s possible hydro enhancements comes in the form of the Mayo Lake Enhanced Storage Project. Originally considered in the original Mayo Enhancement Project Proposal (with Mayo B) it was withdrawn in July 2009 as more environmental and socio-economic studies were required. Yukon Energy also had strict federal funding deadlines to meet for Mayo B.

The original reservoir at Mayo Lake was developed in the 1950s when Mayo A was built. The lake level was raised about 5m and the current operating regime of 2.59m was established. Yukon Energy is proposing to enhance the storage at Mayo Lake by lowering the current licensed minimum level for the lake by up to 1m in the spring. This would give additional water that could be used to displace diesel generation.

The increased operating range would allow the utility to take advantage of occasional high flow years where otherwise excess water would just spill over in the late summer and fall, and be unusable for energy production in the winter.

No construction of any structures would be required for this enhancement project and the additional field studies have now been completed.

Yukon Energy believes any adverse effects of this proposed project can be minimised. Drawing down Mayo Lake by up to 1m in the spring could have potential effects on:

There are several proven methods that can be used to detect changes associated with the project and address any effects. Such methods will be incorporated into a detailed monitoring plan for the lake. Mitigation would include:

• A one-in-three year ‘rest’ period. This water management measure means that if winter drawdown exceeds 2.59m for two years in a row, the third year will be equal or less to 2.59m.

• Lake trout spawning habitat rehabilitation at Gull Island. A trial done in 2010 resulted in a high rate of use by lake trout in the cleaned spawning areas.

Many of the field studies on the local environment were completed in 2008 as part of the work for the Mayo B project filing in February 2009. Since then, additional fieldwork was done in 2009 and 2010 to address the request for more information related to fisheries and wetlands. Yukon Energy is confident that it now has a thorough knowledge of key fish habitats in Mayo Lake and the effects of water level fluctuations.

Discussions with governments, the NND, the community of Mayo, and other interested organisations and individuals began again in February 2011. As yet no decisions have been made about whether to proceed with the proposal