History in the making at Sihwa Lake

Early next year the final touches will be put to its construction and the world’s largest tidal power project, Korea’s Sihwa lake tidal barrage and reclamation scheme, will be ready to come on line. When it starts generating power at its full capacity of 260 MW it will nudge ahead of long term title holder La Rance by a few MW. 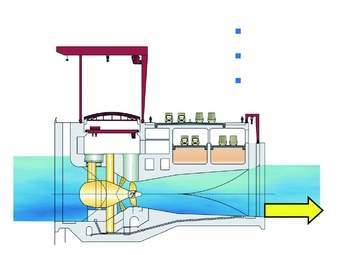 The Republic of Korea’s industrial development started up in the 1970s, focusing on energy-intensive heavy and chemical industries, including steel, chemicals, shipbuilding and cement. Korea is therefore very dependent on its energy supply structure and as well as trying to secure supplies from a greater variety of sources (it is for example currently negotiating gas deals with Russia) it is also developing a positive attitude towards renewables and energy efficiency. Korea ratified the Kyoto Protocol in 2002 and is now looking to explore ways to carry out AIJ (Activities Implemented Jointly) and CDM (Clean Development Mechanism) projects.

The Republic has several familiar reasons for jump starting its renewables sector. It is trying to diversify its energy sources (it is the world’s fourth largest oil importer, taking in 2.5 million barrels of oil per day) to increase security, to meet rising energy demand, and to meet the greenhouse gas emission reduction targets that it committed itself to in 2002 with its Kyoto agreement. It plans to increase spending on alternative energy sources and wants to increase the share of alternative energy in its fuel mix from 1.4 % to 5 % by 2011.

In September 2008 the Ministry of Knowledge Economy released a long-term National Energy Plan until 2030, calling for a policy shift toward using more nuclear energy and renewable energy relative to oil in the country’s energy mix. The Plan envisages spending KRW 3 trillion until 2012 on R&D in new technologies and renewable energy, in co-operation with the private sector.

The country is mainly targeting solar and wind projects but has for some years been closely examining the potential for tidal power projects around its shores, in particular its western coastline where some stretches have mean tidal ranges of up to 6 m, making it a fruitful area for tidal energy schemes. Among the promising sites (see map above) was a potential 480 MW tidal energy site in Garolim Bay, where the mean tidal range is reported to be some 4.7 m, and another at Cheonsu in the Gulf of Asam with a mean tidal range of 4.5 m, and they have been investigated for feasibility by KORDI – the Korean Ocean Research and Development Institute.

These investigations resulted in proposals for several schemes. One was a plan to construct an experimental tidal current plant in the Uldolmok strait, at Jin-do island off the southern tip of Korea. Construction finally started in 2008. The strait is described as a 300m wide bottleneck with a maximum water speed of 6.5 m/s and is one of three prospective sites in the Jin-do island area with a combined potential of 3.5 GW.

But in September 2004 the Korean Ministry of Maritime Affairs and Fisheries (MMAF) had announced its plan to construct the world’s largest tidal power plant, a 260 MW tidal barrage at Sihwa lake in Gyeonggi Province about 20 km SW of Seoul. But even this is not the greatest of Korea’s tidal ambitions. Another ‘world’s largest’ will come into being in 2014 if a similar project rated at an impressive 812 MW is created, as proposed in May 2007.

Sihwa hydro project is located in the mid-west of the Korean Peninsula bordering the West Sea around 4 km from the city of Siheung.

The lake was created in 1994 by constructing a 12.7 km long tidal barrier to secure fresh water for the region, to develop industrial/agricultural land near the local metropolitan area and to secure irrigation and general agricultural water. Besides the 56.5 km2 freshwater lake, reclaimed land of 173 km2 was also created.

However owing to the cutting-off of tidal currents and the rapid increase of population and industrial waste loads from factories in the neighbourhood, the water quality of Lake Sihwa deteriorated over the years following the construction of the dam. The pollution is largely due to the lack of fresh water and the disposal of sewage and other waste from nearby factories. The pollution was considered to be severe enough to demand an immediate solution and it was decided in 1997 to open the lake to sea water. It was this decision that led to the opportunity to create power generation from the tidal inflow and sluice controlled outflow of the water – 60 billion tonnes of seawater annually – that was created by the scheme. It is also expected to play a major role in restoring the Lake Sihwa ecosystem and water quality through the continuing circulation of sea water. The return to a more natural exchange of river and seawater is seen as a major benefit of the scheme, a matter of some importance in a country whose ambitious water management schemes in recent years have given rise to some criticism. The total project costs will be around US$ 250 million, giving a specific investment cost of just under 1 million US$ / MW.

The tidal power plant is designed as a flood generating system, taking advantage of the differing tide water levels between the sea and the artificial lake. On the rising tide water flows through the turbines to create electricity. Separate gates beside the turbines are designed to open during the ebb phase. At low tide, the gates are raised and the water flows from the basin to the sea, but during this ebb phase in sluicing mode although the turbines operate no electrical energy is produced.

The Sihwa lake tidal power scheme is the largest of its kind in the world. When it reaches completion early next year it will be rated at 260 MW capacity, surpassing La Rance tidal barrage in France by between 6 and 20 MW, depending on which of the various figures for the output of La Rance over the years it is compared with. However, it must be said that the claim to be ‘largest’ is open to dispute and interpretation. The two systems work differently, in that Sihwa is a flood tide monodirectional system while La rance is bi-directional and operating mainly on the ebb through sluice action, which allows it to generate more energy in total, 600 GWh per year compared to Sihwa’s 550. And La Rance has been working since 1966 at an averaged production rate of around 68 MW.

The generation project started in earnest in 2005 with the signing of contracts for major plant components, It had a head start because the dam and artificial lake formed in an area of low-lying wetlands and small river estuaries south-west of Seoul has already been in existence for 11 years.

The project owner is K-WATER (Korean Water Resources Corp) the governmental water authority of Korea and the end user of this development. Responsible for irrigation, water supply and wastewater and project development of the project, it is reported as being keen to get into the power production business while fulfilling its responsibility for cleaning up the waterways by a natural exchange process.

The main contractor is DAEWOO Engineering & Construction Co Ltd, a company with a great deal of international experience in process plant works, in oil and gas, refineries, chemical plants, and in civil works – harbours, dams, roads, bridges, airports, railroads and so on. Daewoo contracted with Andritz VA Tech Hydro to carry out the detailed design and equipment supply for the turbine generator equipment as technology provider, as well as supplying electromechanical equipment and services.

Ten unidirectional bulb type turbines with directly driven generators are being installed. The hydropower island at the centre of the dam will contain the ten 26 MW bulb turbine units, which have runner diameters of 7.5 m. They are mono-directional, so power will only be generated during flow from the sea to the lake.

Corrosion protection is primarily by cathodic protection, a technique by which the electrical potential of the protected components is maintained at a slight negative value compared to the ground and the electrolyte. This avoids destructive dissolution, or corrosion, by ionisation of the metal surface. The necessary protective current depends on the oxygen content of the sea water, its salt content, the degree of alkalinisation of the protected surfaces, the temperature and the flow velocity.

Anti-corrosion techniques have a strong influence on material selection. For components like runner blades and the runner hub, special steels containing higher grades of chromium and molybdenum have been chosen. Components usually made of carbon steel, such as the runner cone, gate barrel cones, wicket gates, and water passage shield, are made of stainless steel, while the cooling equipment is stainless steel plated.

Because of the limitation of the maximum lake level (-1.0 metre) and economic considerations, the units generate power only when water flows from sea to lake.

To release water from the lake during the ebb, 6 existing and 8 newly installed gates will be opened and the turbines rotate in reverse without producing power. This creates a counterthrust in the thrust bearings which had to be taken into account in the design. To ensure low vibration levels during this operation the relationship of runner blade operation and wicket gate position was investigated during a model test run.

High number of starts and stops

The generating units have to operate twice a day, in addition to their twice a day operation in reverse mode. This is a much higher stop-start frequency than is usual for a run of river bulb turbine unit. The number of starts and stops must be taken into account in the calculations for and final design of the equipment, leading as it does to condensation and to operation under a varying temperature regime. A typical run of river bulb would be operating at a constant temperature. Consequently detailed structural and electromagnetic calculations had to be carried out to ensure proper functioning of the generating equipment under ‘unsteady thermal behaviour’.