Deep Creek RCC dam in North Carolina was awarded the United States Society on Dams’ Award of Excellence in the Constructed project for 2013. Schnabel Engineering was the principal designer and engineer for this scheme which used grout enriched RCC as the sole upstream barrier for the first time in the US. 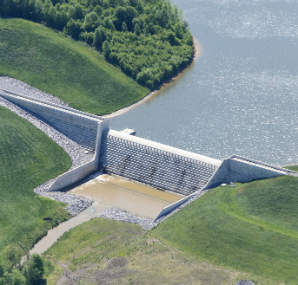 Deep Creek Watershed Dam 5D is a multi-purpose flood control and water supply dam located on a 65km2 watershed in North Carolina, US. Schnabel Engineering provided planning, design and construction engineering services for this project, which was sponsored by the US Department of Agriculture’s Natural Resources Conservation Service, Yadkin County, the Yadkin County Soil and Water Conservation District, and the North Carolina Department of Environment and Natural Resources Division of Soil and Water Conservation.

The design concept took advantage of shallow competent bedrock on the right side of the valley (looking downstream) to support a 23m high RCC gravity spillway and abutment closure section with a length of 230m. On the left side of the valley, rock was both deeper and more variably weathered. Cost-effective use of site materials and site conditions dictated a zoned earth embankment for the remainder of the impounding structure. The earth embankment was designed to wrap the RCC dam and extend about 240m to the left abutment. Notably, this project includes the first use of grout enriched roller compacted concrete (GERCC) in the US as the sole upstream barrier against seepage.

The United States Society on Dams (USSD) annually selects one project that commends the high standards of performance reflective of excellence and prudent use of new and evolving technologies in the design and construction of dams. The project proponents and the design team were privileged to have Deep Creek Dam selected by USSD for its Award of Excellence in the Constructed Project for 2013. This award selection was based on the team’s responsiveness in beneficially leveraging site opportunities, and effectively addressing project constraints and challenges to couple cost effectiveness with aesthetics, environmental sensitivity, innovation and functionality.

Alternatives
Early in the design, multiple alternatives were considered, including RCC and earth embankment alternatives. The original concept assumed an earth embankment dam with a 120m wide left abutment auxiliary spillway. During site investigations, it was found that a left abutment spillway was problematic, due to extensive rock excavation and the presence of an historic cemetery. The need for significant spillway capacity and the presence of shallow bedrock commonly amplify the cost-saving benefits of an RCC dam. To take advantage of near surface, high quality bedrock in the right half of the valley, and to enhance economy and performance where rock was less reliable, a composite RCC/earth embankment structure provided the winning combination. A two-stage, drop inlet principal spillway was designed for flood control function of the project, including a 1.5m conduit through the RCC dam. To pass the inflow design flood of 2450cm/sec, the RCC dam was equipped with a 92m wide overflow auxiliary spillway.

The RCC portion of the dam was designed to provide spillway capacity, to suitably interface with the embankment section and be stable for all anticipated loadings. A vertical upstream face and stepped downstream face with an overall slope of 0.8H:1V was selected for both stability and constructability. Steps were 91cm high, except for the spillway crest transition. The RCC mix comprised of roughly equal weights of #467 stone (approximately 3.8cm to 5mm), aggregate base course (ABC – from 3.8cm to fines) and manufactured sand (5mm to fines) blended in a 35%/35%/30% mix. Cementitious content was 68kg each, by weight, of cement and Class F fly ash. A water reducing, set retarding admixture was also included. Contraction joints were spaced at 18m.

The ogee auxiliary spillway transitions to a stepped downstream face. Converging training walls narrow the overflow by 20m to the base of the dam. Spillway steps, converging side-walls, and a roller bucket, provide energy dissipation and allowed for a smaller stilling basin. Based on exposure of high integrity rock in the basin, the basin’s concrete floor was eliminated. The auxiliary spillway activates at a 100-year event (285cm/sec inflow), with lesser discharges conveyed through a two-stage riser attached to the RCC dam’s upstream face.

Schnabel considered three RCC facing alternatives, including formed RCC, conventional concrete and GERCC. Selection factors included constructability, permeability, durability, cost, and appearance. GERCC and RCC were less costly than conventional concrete. Seepage through conventional concrete and GERCC was expected to be similar, with proper installation of waterstops slightly more difficult with GERCC. In the end, formed RCC was judged unacceptable based on anticipated poor seepage performance. GERCC facing would have less impact on other construction processes than conventional concrete, but had never been used as a sole upstream seepage barrier on a US dam, although international experience showed successes on many large RCC projects. GERCC was selected based on anticipated cost savings of US$$300,000 and production advantages, with greater placement flexibility along irregular abutment rock interfaces.

Embankment design
The earth fill embankment was designed with 3H:1V upstream and downstream slopes, a central core, upstream and downstream shells and slope benches on the upstream and downstream slopes. Removal of alluvium exposed a competent residual soil foundation for the earth embankment. Seepage controls included a chimney drain separating core and downstream shell soils within the dam and a trench toe drain. Both drains extended into the left abutment residual soils. The critical wrap-around of the RCC was provided with ample protection and the RCC extended 4.9m into the earth fill (at the top of dam). Due to the project’s significant flood control function, normal freeboard is more than 11m, providing an extended seepage path that increases with depth. A GERCC batter was provided at the RCC wrap-around to facilitate compaction of earth fill against RCC and to promote a competent, continuous contact surface.

Dam construction
Bids received in October 2008 ranged from US$16.8 to $22.5M. Haymes Brothers, the prime contractor, teamed with subcontractors ASI Constructors and Layne GeoConstruction for concrete work and grouting, respectively. Haymes developed a plan to expedite diversion of Deep Creek, excavate the foundation for the RCC dam, clean and prepare the rock foundation, and grout the underlying rock within five months (from December through to April). If these preliminary tasks could be completed expeditiously, RCC placement was planned for the late spring months, with earth fill constructed over the summer, allowing the project to be completed well ahead of schedule.

Stream diversion necessarily assumed the RCC portion of the dam would be constructed first. The 10-year storm stream diversion was a 12m wide, 800m long channel lined for its entire length to minimise erosion, and having a depth of 3m.

RCC placement began in May 2009 but was short-lived. After two weeks of unusually hot weather, placement was halted due to temperature limitations. The contractor refocused on reinforced concrete placement for the stilling basin end sill and side walls, roller bucket, principal spillway riser and 1.5m diameter outlet conduit. RCC placement resumed in September 2009, but was limited to night placement when ambient temperatures were cool. The contractor shaded aggregate stockpiles, mobilised a 40 ton chiller and stored water in an insulated tank at less than 4º C.

October temperatures were cooler, allowing RCC to be placed day and night, with two 10-hour placement shifts. This dramatically reduced intermediate and cold joints and accelerated placement. The project’s 39,000m3 of RCC topped out in December after 65 placement days. GERCC processes worked very well, but were labour intensive and relied on consistency, patience, and attention to detail from labourers assigned the grout placement and consolidation task. Quality control and assurance for GERCC consisted primarily of close visual observation and periodic Marsh funnel testing of grout. The process consisted of spreading a loose RCC lift and using a pitch fork to further loosen the upstream 40cm.

The volume of grout applied varied slightly depending on the mix consistency, but was generally 6L of grout per metre of upstream face. A proportional amount was used for the downstream steps (30cm zone for riser lifts and 1m zone for treads). Vibrators consolidated the facing in two offset rows. Occasional honey combing was repaired with non-shrink grout following form stripping.

In parallel with early RCC startup, the embankment foundation was excavated between the RCC dam and the diversion channel and several feet of zoned earth fill was placed across this area, including portions of the toe trench drain, chimney drain and drain outlets.
Earth fill placement was resumed in parallel with the restart of RCC placement. It was the contractor’s plan to place zoned earth fill concurrently as the RCC dam was raised. With RCC placement progressing, the contractor elected to relocate the stream diversion through the 1.5m principal spillway conduit. The diversion channel was removed and earth fill placement advanced.

As the RCC dam progressed, weather significantly impacted earth fill placement. Heavy rainfall in November saturated in-place embankment fill and elevated the moisture content of borrow soils. The weather remained consistently wet from November through to January. Shorter daylight hours and cooler temperatures did not allow sufficient drying before more rain occurred. In late January, a severe thunderstorm dropped about 8cm of rain in less than six hours. The embankment overtopped, washing out about 12,000m3 of earth and drain fill.

February brought drier but colder weather. Earth fill crews worked around the clock to replace the chimney drains, repair damage to the embankment and place earth fill to raise the embankment to safer levels.
Round the clock placement also precluded embankment surface freezing, which minimised rework. The embankment topped out in April of 2010, consisting of 122,000m3 of core material, 230,000 cubic yards of shell fill, 5,400m3 of drain fill, and 5,400m3 of riprap.

Lessons learned and relearned
The Deep Creek Dam had been proposed since the 1960s. Its successful completion provides flood protection and water supply beneficial to the citizens of Yadkin County. Project lessons learned offer food for thought to others designing similar facilities in the future:

– Successful use of GERCC rests in diligent contractor quality control and persistent oversight.
– For a composite dam, attention to detail at the interface between concrete and earth is of paramount importance. If not treated with great respect, the junction of a near vertical, full height contact between rigid and deformable materials represents a major potential failure mode. A conservative overlap (wrap around) must be provided, with wet of optimum cohesive soils abundantly used to limit seepage and allow plastic settlement of the embankment along this contact. Extension of the chimney drain for the full length of the downstream wrap around overlap is a key adjunct treatment.
– Composite dams often require several large contractors with different trade specialties to stage and sequence work in close proximity. For Deep Creek Dam, an earth moving contractor, a concrete/RCC subcontractor and a grouting subcontractor were teamed. Project success demands that a comprehensive plan be developed and executed among contractors, allowing them to effectively sequence work and maximise supportive collaboration.