Going green from the African sun

Importing solar power from the sun belt of the Middle East and North Africa to Europe is little more than a mirage at present, but if realised it could speed up Europe’s attempts to cut CO2 emissions, help its energy security and at the same time provide jobs, earnings, drinking water and an improved infrastructure south of the Med. So say the supporters of TREC, a band of influential folk dedicated to making the dream a reality. 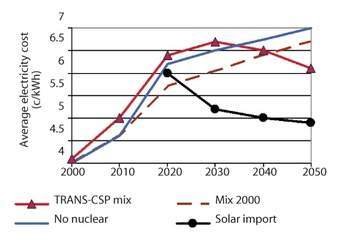 When prominent folk such as Klaus Töpfer, the former executive director of the United Nations Environment Programme, Anders Wijkman, former UN assistant secretary-general, Prince Hassan bin Talal of Jordan, and organisations like the Club of Rome and the World Future Council say something, the world tends to listen. What they are saying now is that a concept at whose core is the generation of electricity by solar thermal power plants in North Africa, to be sent to the European transmission network via HVDC lines across the Mediterranean, is a realistic and valuable proposition.

The concept they have proposed is encapsulated in a report, Clean Power from Deserts, from the German Aerospace Centre, subtitled ‘The DESERTEC Concept for Energy, Water and Climate Security’. It was commissioned by an initiative of the Club of Rome called ‘Trans-Mediterranean Renewable Energy Co-operation’, or TREC, and was presented to the European Parliament in the autumn of 2007. A second edition was published in March 2008. What follows is a summary of those reports.

According to concept proponents, the technologies required are already proven, if never tried in this combination. They concede that the total investment will be both large and uncertain, as will the risks. But other risky projects have been undertaken with success. And the rewards of success with this one are far reaching – not just technological, but also economic and political.

It seems reasonably certain that by the middle of the 21st century humanity will have used up a major part, leaving aside coal, of the fossil fuel resources available to meet the demands of power plants and vehicles. A significant reduction in worldwide demand for fossil fuels is not in sight, despite the fact that such a reduction is essential if we are to contain the threat of global warming. A small reduction in demand is merely putting off the evil day.

A major shift to renewable forms of energy can be a long-term solution to looming problems of energy shortages and damage to the environment. The situation in Europe is that although the continent offers great potential for wind, hydro, geothermal and solar power, the utilisation of these sources of energy is limited by the density of its population. But if the renewable sources of Europe and the Middle East/North Africa were combined, the EU-MENA region would be in a much improved position to shift to clean and secure energy rapidly and economically.

TREC was founded to achieve this goal. Power from the sun belt of Africa and the Middle east, added to European sources of renewable energy, could speed up Europe’s attempts to cut CO2 emissions, help its energy security and at the same time provide jobs, earnings, drinking water and an improved infrastructure for people in Middle East–North Africa.

TREC has been involved in carrying out two studies to evaluate the potential of renewables in MENA, of respectively the expected need for water and power in EU-MENA between now and 2050 and the potential for a electricity transmission grid connecting the EU with MENA. They were commissioned by the German Federal Ministry for the Environment, Nature Conversation and Nuclear Safety (BMU) and have been conducted by the German Aerospace Centre (DLR). The ‘MED-CSP’ study was produced in 2005 and the ‘TRANS-CSP’ study was completed in 2006. An ‘AQUA-CSP’ study about the needs, the potential and the consequences of solar desalination in MENA was completed at the end of 2007. Figures 2, 3 and 4 show some of the results of these studies.

In the scenario described in reports from the DLR, it would be possible to cut emissions of CO2 from electricity generation by 70% and phase out nuclear power at the same time – with decreasing electricity costs in the long-term.

Compared to power from new local fossil and nuclear plants, solar power from north Africa would be cheaper in southern European countries like Spain and Italy from the beginning of transmission, assuming that to be in 2020. With progressive cost reductions and EU-MENA grid expansion this would become so in most other European countries by at the latest 2030. The

EU-MENA-connection as studied in the TRANS-CSP scenario would require an investment of r45 billion until 2050, and yield annual savings of up to r10 billion.

To give an idea of scale – satellite-based studies by the German Aerospace Center (DLR) have shown that, using less than 0.3% of the entire desert areas of the MENA region, solar thermal power plants could generate enough electricity and desalinated seawater to supply current demands in EU-MENA, and anticipated increases in those demands in the future. There is also the opportunity to harness the winds in Morocco and on land around the Red Sea. Solar and wind power could be distributed in MENA and transmitted to Europe with transmission losses that would be no more than 10-15%. The Club of Rome and TREC are both pursuing this Desertec concept, while Algeria, Egypt, Jordan, Libya, Morocco and Tunisia are among the countries that have already shown an interest in this kind of co-operation.

At present the technology that provides the most secure output is solar thermal power plant, or concentrating solar thermal power, CSP, which uses mirrors to concentrate sunlight, create heat and raise steam to drive steam turbines. Excess heat from additional collectors can be stored in tanks of molten salt and used for night time or for peaking. For longer term backup the turbines can also be powered by fossil or biomass fuels. Waste heat from the power-generation process may be used (in cogeneration) to desalinate seawater and to generate thermal cooling.

The TRANS-CSP study focuses on the interconnection of the electricity grid of Europe, the Middle East and North Africa (EUMENA) (Figure 1) with the purpose of supplying about 15 % of the European electricity demand by solar energy imports from the south by the year 2050. The conventional electricity grid is not capable of transferring large amounts of electricity over long distances. Therefore a combination of the conventional alternating current grid with HVDC transmission technologies would be employed in such a Trans-European scheme.

Grid systems usually have enough balancing power capacity to compensate for fluctuating sources and unforeseen failures of power lines or plants. Employing a wide range of renewable sources, large numbers of solar plants and wind farms in many countries help to diversify supply. Likewise, the use of many HVDC transmission lines to Europe owned by many different utilities would help to increase security of supply.

Sunlight is not subject to the problems of shrinking global reserves, which is leading to higher prices, to political dependencies and to limits on supplies. And as solar volumes increase, costs will fall and the technologies will improve.

Increasing solar power flow into Europe would also lead in all likelihood to more business opportunities for the MENA countries, leading in turn to increased political stability and improved relations between Europe and MENA. There is also the possibility of generating hydrogen for transport, and of diverting biomass into transport fuel production.

The technologies that are needed to realise the Desertec concept are already developed and some of them, for example long distance HVDC transmission lines up to 3 GW capacity, have been deployed over long distances for many years. At the World Energy Dialogue 2006 in Hanover speakers from both ABB and Siemens confirmed that the implementation of a Euro-Supergrid and a EU-MENA-connection is, technically, entirely feasible.

New solar thermal power plants with a total capacity of more than 2000 MW are either planned, under construction, or already in operation. The Spanish government guarantees a feed-in tariff of about 26 EuroCent/kWh for 25 years and this has established favourable business conditions for CSP. Because of the higher solar radiation at good sites in the USA or MENA it is now possible to use lower rates in feed-in tariffs. The DLR has calculated that, if solar thermal power plants were to be constructed in large numbers in the coming decades, the estimated cost would come down to about 4-5 EuroCent/kWh.

In order to establish, by 2050, a capacity of 100 GW of exportable solar power in MENA, over and above the domestic needs of sun-belt countries, only a few governmental supporting measures would be necessary to make the construction of the power plants and the necessary transmission grid more attractive to investors, both private and public, as demonstrated by an approximate investment forecast for the TRANS-CSP scenario researched by the DLR.

Construction of new concentrating solar thermal power plants has begun already in Spain and in the USA (Andasol 1 & 2, Solar Tres, PS10, Nevada Solar One). Projects are in progress in Algeria, Egypt and Morocco and further plants are planned in Jordan and Libya. Morocco has implemented a feed-in law to support renewables (wind in particular). Discussions about the construction of an HVDC-Supergrid across Europe (a Euro-Supergrid) have started in the EU and plans for offshore wind farms are taking shape.

While solar thermal power plants already work economically in MENA countries, further reductions in costs would be necessary to make CSP a profitable export option from MENA. Growth in the construction of those plants and EU support for the Euro-Supergrid with an EU-MENA-Connection would help to drive down costs in the period up to 2020. Towards that goal, it would be useful if the EU would provide advice and support for the possible introduction of feed-in regulations in MENA countries along the lines of the German and Spanish Renewable Energy Laws. International guarantees for the local feed-in contracts or power supply agreements would help to boost the construction of solar plants and wind turbines.

It is very important, say TREC enthusiasts, that talks begin soon on the development of the proposed Euro-Supergrid with a EU-MENA-connection. This would facilitate the optimal integration of all renewable sources of energy from Europe with renewables from MENA. On its own, the initiation of the EU-MENA-connection for the transmission of clean power from deserts to Europe would create a boom of investments in renewable sources of energy in MENA countries. The construction of HVDC grids for the first 10 GW, as described in the TRANS-CSP scenario, would cost about r5 billion. If the EU-MENA-connection is to start transmission by 2020, talks within the EU and with the governments of MENA (perhaps in the Barcelona Process) must begin as soon as possible.