Going for a greener grade of steel

CyCoFos has recently started up a ‘two-in-one’ power project – a 420 MW CC plant with a 60 MW furnace gas fired steam plant – at an Arcelor Mittal steelworks near Marseilles, France. The two are part of an effort by GDF Suez to increase its generating capacity using the most environmentally advanced technology. 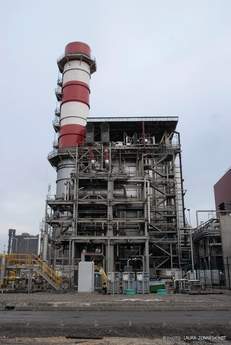 Steel production is well known for its high energy consumption and generation of waste gases. Arcelor Mittal is the world’s second largest steel producer and improving the environmental impact of its steel plants is of great importance. So for its steel plants in France the company decided to enter into an agreement with gas and electricity company GDF Suez to improve the utilisation of the waste gases these plants produce.

In line with this strategy, two power plants have begun commissioning at a site in the south of France to improve the efficiency and reliability of energy production and cut emissions. The first plant is, at 420 MW, one of the biggest combined cycle plants in France. The second is a steam facility, burning blast furnace gas to generate

60 MW. The project follows on from the DK6 project developed by GDF Suez and Arcelor Mittal at a steel plant in Dunkirk.

The two plants have been installed on the site of a steelworks owned by Arcelor Mittal in Fos-sur-Mer, near Marseilles. The works, which is responsible for about a quarter of the entire French steel producing capacity, met the needs of both GDF Suez subsidiary CyCoFos, which was looking for a site for a combined cycle plant to increase its installed capacity, and Arcelor Mittal, which wanted a plant that could burn excess gas from its steelworks.

Blast furnace gases (BFG) are polluting gases containing hydrogen, carbon dioxide and carbon monoxide, but they can be utilised to help produce the huge amounts of steam and electricity required by a steel plant. Installing a facility that was able to make use of excess BFG was therefore beneficial to Arcelor Mittal and good for the environment.

The decision was taken to install two units: one combined cycle plant of 420 MW ‘Power Line 1’ (PL1) and a small boiler and steam turbine (PL2) to generate 60 MW.

All the components, mainly the gas turbine, steam turbine and condenser, the generator and the heat recovery steam generator were part of Alstom’s scope of delivery.

The air flow through the gas turbine is controlled by three variable inlet guide vanes (VIGV) at the compressor. During part-load operation, the GT controller controls the VIGV position while keeping the exhaust gas temperature of the gas turbine nearly constant as long as possible down to 25% gas turbine load to ensure maximum combined cycle efficiency.

This SSS clutch is a standard feature of the KA26-1 single shaft power train and is used to disconnect the steam turbine from the gas turbine generator set during start-up and shut down, to enable a smooth start-up/shut down of the plant. Without this, an auxiliary boiler would be needed to start the plant.

Exhaust heat from the gas turbine is fed to a triple pressure heat recovery steam generator (HRSG) to produce superheated HP steam at a temperature of 565 °C and a pressure of 140 bar.

The plant is capable of operating down to approximately 60 % of maximum load while meeting the emission limits. It is expected that the plant will run in a start-stop operation mode, ie at full load during the day, with shut-down overnight and during weekends.

The main purpose of the second power plant, identified as Power Line 2 (PL2), is to burn blast furnace gas. BFG is very polluting and has a low calorific value. This means it is usually simply flared to the atmosphere when Arcelor Mittal’s consumption for its own needs is not enough to employ all the gas available.

It was therefore decided to install a special boiler that could use the BFG to generate power. Some of the power will be used on the industrial site but a large proportion will be sold either to the grid or to other private customers of GDF Suez.

Producing 90 kg/s of steam, the boiler, which is expected to run in baseload operation, is similar in design to a conventional steam boiler but has some special modifications. Due to the low gas quality, specific combustion studies were carried out to define the dimensions of the furnace, heat exchangers, type of burners etc.

The boiler is a vertical type, two pass unit with horizontal tube bundles in the rear pass. It generates steam at about 560°C and a pressure of around 115 bar. The firing system has three burners for burning BFG with a total firing capacity of 160 MWt and two natural gas burners with a total firing capacity of 80 MWt. The natural gas burners enable start-up of the boiler. In some instances, they will also compensate for any lack of BFG. Of its 396 ton/h the boiler provides a backup steam export of 70 ton/h to Arcelor’s steel plant.

Emissions monitoring and control systems maintain NOx, CO and dust levels at the legislated limits. NOx emissions are guaranteed at less than 50 mg/m3, CO at less than 85 mg/m3 and dust at less than 10 mg/m3.

Both plants are controlled by a single power plant automation and control system which is integrated with the control of other power plants in the GDF Suez fleet. An operator can remotely control and adjust the output of both plants according to the customer’s needs or grid requirements.

One alternative solution for the customer would have been to integrate the plants further by feeding the steam from both the combined cycle and the BFG boiler into a single steam turbine. However, it was decided that having two separate plants, which allowed greater operational flexibility, was desirable, and this was developed by Alstom and CyCoFos working together.

Although there are two separate plants there is still a significant amount of common equipment, eg effluent handling, water production and air production units, which have been arranged in the most economic layout. Providing the same type of equipment also allowed the variety of spare parts to be minimised, which helps to streamline maintenance activity.

Alstom developed an integrated solution in order to meet CyCoFos’ requirements for having two different power plants using different fuels. Alstom’s Plant Integrator approach contributed in the design of the plant, allowing the best plant with the best performance to be built in a small space.

The Plant Integrator concept is Alstom’s unique offering whose claim to fame is that it can, by combining the company’s EPC capabilities with an intimate knowledge of its wide product portfolio, deliver optimised solutions that increase the ‘net present value’ to the customer of any given offering. Six key areas are indentified – investment, lead-time, performance, availability and flexibility, retrofit, and life extension. In this case it allowed Alstom to deliver a customised solution that was able to supply energy in the shortest timeframe.

Building the plant at an industrial site operating under the Seveso safety directive presented some challenges. The type of steel plant meant that there was restricted access to the site. Anyone attempting to gain access to the site would be subject to a number of controls and authorisations, which constrained the movement of materials on to the site.

The pumping station and HV switchyard area are located outside the main site. This situation had to be considered in relation to the various rules and safety aspects. Construction activities between the main site and these outside areas therefore called for careful planning.

The warehouse is also located outside the main site, which meant that there was a transportation lag time between the materials storage area and the main site.

Gaz de France began discussions with Arcelor in 2002 and called for bids on the project at the end of 2004. Alstom submitted its bid in January 2005 and was selected as the preferred bidder in August 2005. Following selection, it immediately began pre-engineering to determine the plant parameters and obtain the plant permits.

The contract between Alstom and CyCoFos was finalised and signed in June 2006 to enable contract execution to begin in August 2006. Piling activities begun immediately, and civil works started in earnest in January 2007.

Designing and constructing two completely different projects in parallel was a real challenge. The projects were executed at a time of high activity in the market. This meant there was a shortage of manpower, increased costs and delivery times for equipment. In the event the gas turbine was delivered in August 2007. With the delivery of the boiler main parts, mechanical erection started in September 2007.

The HRSG for the CyCoFos combined cycle plant uses C-Frame technology. Here the modules and steel structure are put together at the factory, the tube bundles are inserted into the steel structure, the casing is built and the entire HRSG is delivered to site as 10 complete modules. This allowed erection at site of the heat exchangers in just two weeks. It is estimated that this technique saved around 10 % in man-hours on site.

The combined cycle steam turbine was delivered one month after the gas turbine. First firing of the gas turbine took place in November 2008 and final testing is currently underway.