Geosteering into the future

For almost two decades, geosteering has given upstream production teams an invaluable understanding of subterranean geology. Despite the obvious advantages this brings, the practice is still far from ubiquitous. Jack Wittels talks to Halliburton’s chief petrophysicist Roland Chemali about the current state of geosteering. 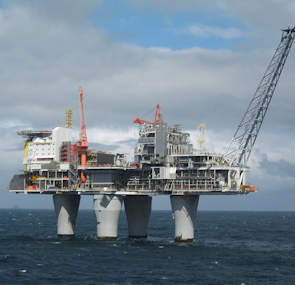 In 1995, commercial production began at the oil and gas-rich Troll fields that lie 80km off Norway’s west coast. Originally, only the gas column was considered economically viable; the substantial oil interval was too thin for production. The development of these resources was therefore seen as a minor miracle, and is now regarded as the beginning of a fundamental change in upstream production techniques.

In a move initiated by Hydro Oil (now a Statoil subsidiary), the fields were drilled using horizontal wellbores. The primary challenge was to stay within the narrow confines of the reservoir’s oil supplies; failure to do so would result in a significant financial loss for those involved.

"That was the moment when geosteering really came to the industry’s attention," says Roland Chemali, chief petrophysicist at Halliburton.

Now, almost 18 years on, $3-5bn of oil has been extracted from the Troll fields. The practice of geosteering – monitoring geology during the drilling process to ensure the drill stays inside a reservoir’s productive zone – has also come a long way: industry uptake has been steadily increasing, with Chemali claiming the amount of footage geosteered by Halliburton rose by over tenfold between 2008 and 2011. While a portion of this rapid growth is a consequence of technological innovations, broader market forces have also been at play.

"There used to be no perceived need to place a well properly; initial production would always be good, no matter how badly you did it," Chemali explains. "But as conventional resources approach depletion, companies have started to take a longer-term perspective. They’re putting more emphasis on placing wells properly to ensure a maximum sweep of the oil reserves and to avoid potentially damaging early water breaks.

"Industry acceptance of geosteering’s ability to achieve these results is not yet ubiquitous. But that’s typical for a relatively new technology, and awareness is definitely on the rise. There’s also still plenty of headroom for geosteering to expand technologically and in terms of finding new applications."

The most significant technical development to date has been the shift from reactive to predictive (or proactive) geosteering (see image, above). Originally, tools focused on detecting when the drill bit exited the reservoir’s productive zone through logging while drilling (LWD) procedures. Drilling teams would then react to this information and correct the drill’s course.

In the mid-2000s, however, new azimuthal resistivity technology (see image, below) allowed production teams to analyse geological formations surrounding the drill bit, enabling anticipation of leaving the reservoir. The course could then be adjusted to stay inside the productive zone.

The result was an unprecedented increase in drilling efficiency and accuracy, significantly reducing costly non-productive time, allowing more resources to be extracted from individual reservoirs and leading to greater total asset recovery.

"Reservoir contact rates of approximately 85-100% are routinely documented when predictive geosteering is used in conventional operations," says Chemali. "It also means wellbores are a lot more stable; you’re staying within the reservoir rock type, rather than straying into other, possibly less mechanically competent lithologies."

"Reservoir contact rates of 85–100% are routinely documented when predictive geosteering is used in conventional operations."

The latest predictive geosteering technologies make use of gamma and resistivity azimuthal sensors to read surrounding lithologies and thus direct the drilling process. Sperry Drilling’s Azimuthal Deep Resistivity Sensor (ADR) (see image, opposite) is one of the most advanced tools in today’s market. Using three pairs of transmitters to emit a series of electromagnetic wave trains at frequencies of 125kHz, 500kHz and 2MHz, the 25ft ADR measures the phase difference and attenuation of the waves to recognise changes in geological structures up to 18ft away from the drill bit. With data acquired from 32 directions at 14 different depths, the ADR is able to quickly build up a comprehensive picture of surrounding lithologies.

Specialist geosteering engineers on the surface then use the data to make steering decisions, maintaining the required distance from bed boundaries and avoiding contact with water zones and overlying caprock. When crossing faults that are too small to be detected by seismic surveys, measurements from multiple depths can be used to delineate the different strata so that correlation can be continued across the fault.

Although an effective piece of technology in its own right, the ADR is optimised when used in tandem with other subterranean imaging technology. The StrataSteer 3D programme, also from Sperry Drilling, combines data from a 3D Earth model, directional well planning, a petrophysical engine and dynamic log correlation to produce a detailed picture of the surrounding geology, including where the reservoir boundaries are most likely to be.

"StrataSteer gives the geosteering specialists working in the real-time operations centres on the surface the information they need to make choices about whether to drop or build angles, and to go left or right," says Chemali. "Those crucial decisions have to be taken within minutes on conventional wells, so a comprehensive image generated from a range of data sources is incredibly useful."

More recently, industry attention has been focused on a different type of geosteering. Driven by the ever-increasing scarcity of traditional resources, LWD companies are investigating how the technique can be applied to unconventional reservoirs, typically formed of oil shale.

"Unconventional drilling operations start out with a broad basin study detailing the main components of the interest zone," says Chemali. "From there, an initial vertical well is made, and using seismic tools and geological cuttings, companies then decide which areas they want to drill."

The steering of the subsequent horizontal drilling is based on maintaining high levels of total organic carbon (TOC) and brittleness. The Passey method can be used to check for TOC levels, though the need for extensive data can make it an expensive process. Brittleness is measured by surface level mineralogical analysis, involving a two to three-hour wait for cuttings to come back from the drill bit, and an additional two hours before the final results.

"LWD companies are investigating how geosteering can be applied to unconventional reservoirs."

"Mineral analysis for unconventional wells is still very much in its infancy," says Chemali. "I recently attended a workshop where one North American geologist said their main index for unconventional geosteering is the number of shark teeth they find. It sounds mad, but plenty of people there were nodding in agreement. Someone else said they looked for pyrite. It just shows that people are actively increasing their knowledge databases."

There is another option for measuring brittleness that can provide real-time information, though it is significantly more expensive than mineral analysis: LWD sonic anisotropy. Still in its infancy and yet to have a significant impact, Chemali nevertheless believes it will soon have an important part to play.

"Sonic anisotropy is an effective indicator of brittleness, but it’s probably only used in under one in 30 wells at the moment," he says. "The reason it hasn’t taken off so far is the chicken-and-egg syndrome: companies want to see the method proven before they invest, but that can’t be done until people decide to try it. Its day in the sun will no doubt come soon though."

Sophisticated modelling software, much like the StrataSteer 3D, also looks set to play a central role in the future of unconventional geosteering. Landmark, another Halliburton subsidiary, has developed a programme combining information from the drill bit, geologic maps, engineering data, 3D geomodels, petrophysical attributes and seismic data to build and update a basin model while wells are being drilled. The electronic information can then be shared among geologists and engineers, facilitating more efficient and accurate well planning and drilling.

Chemali is optimistic about Landmark’s new product, though to reach its full potential, he believes there will have to be a rapid evolution in the way upstream production currently operates.

"Sophisticated modelling software, like the StrataSteer 3D, looks set to play a central role in the future of unconventional geosteering."

"To build a truly accurate picture of the basin, you need to verify the correlation between the data from the software and the reality of what the drilling processes encounter," he says. "The trouble is that only about one well in 100 runs a production log for the entire process, so the data is hardly ever comprehensive. Even if you offer to run the production log for free in the name of science, operators are still very reluctant to do it because there’s a perception that it will somehow jeopardise production."

On course in upstream