Fresh off the coast – energy from the ocean

Following a year of successful testing of the CETO ocean wave energy converter's first generation unit in waters off Fremantle, Western Australia, the next step is to deploy its successor – the CETO II system 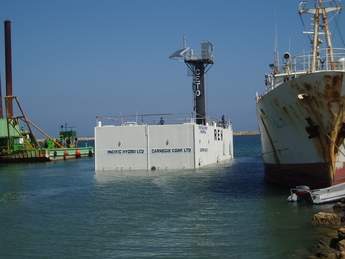 Most people know the city of Fremantle, a port located in Western Australia, for its cosmopolitan coffee culture and fast ocean racing yachts – its seas are more accustomed to hosting yachts than wave powered electricity and fresh water production plants. But this port of call for many around-the-world yacht races and temporary home of the holy grail of yachting, the America’s Cup, has recently seen the winds shift in favour of the waves.

The energy in ocean waves is estimated to be hundreds of times denser than other forms of renewable energy such as wind or solar. It is also the most consistent with 100% availability in many locations, is inexhaustible, and consumes no fuel. The South West coastline of West Australia has some of the worlds most powerful wave activity, providing a yearly average energy flux of 78kW/m of wavefront. Large areas of the UK coastline also enjoy high rates of between 60 and 70kW/m of wavefront.

While wind and solar are growing at around 30% per annum, wave power projects and technologies, such as UK-based developers Renewable Energy Holdings (REH) CETO technology, has the potential for faster growth and payback periods competitive with coal or gas-fired base load power plants. This is without considering the co-generation of freshwater from the wave energy plant via the proven reverse osmosis process.

REH CEO Mike Proffitt says that Western Australia provided top rate geographical siting for the CETO facility and had the right intellectual and research environment too: ‘We have CETO I located in the water a few hundred metres offshore from our research laboratory. It’s a beautiful scene, right on the edge of the Indian Ocean with the sun setting over those ocean waves. Fremantle Port Authority leased us the seabed and we got the building so here we are, top flight scientists and engineers and the right location.’

CETO, named after a sea goddess in Greek mythology, owes it genesis to the ‘can do’ culture of the offshore oil industry. Developed by Alan Burns, the founder and retiring chairman of oil explorer and producer Hardman Resources, CETO is designed to be simple and robust – always an advantage when dealing with the vagaries and power of natural forces such as the ocean swells.

At the heart of CETO is a pumping system that utilises wave energy to generate high pressure saltwater. This is then piped ashore to drive off-the-shelf reverse osmosis (RO) units that produce fresh water and Pelton turbines that generate electricity.

CETO is the first wave power converter to sit on the seabed, where it is invisible, safe from storms and ocean forces, and self contained. Unlike other wave energy technologies that require undersea high voltage grids and costly marine qualified plant, CETO requires only a small diameter steel pipe to carry high-pressure seawater ashore. So in the event something does go wrong, the only spillage is seawater. Although REH technical director Alan Burns has developed the CETO concept since 1975, detailed design of the project commenced in August 2003 with construction of the unit starting in December of the same year.

It took 12 months to manufacture and install all components and following an extensive three month ‘dry testing’ phase, the CETO unit was launched to sea on 21 March 2005 at Fremantle. During March and April the CETO unit was kept quayside for further testing, concrete ballasting and the installation of computer software.

During the same period, a contract with Fremantle Port Authority was finalised. This provided a lease agreement for the seabed deployment location and pipeline route to on-shore facilities. These facilities house the computer equipment required for testing and data collection as well as a wave test tank, a Pelton electricity turbine and a reverse osmosis freshwater production unit.

On 4 May 2005, CETO was towed out to sea and successfully sunk on to the demarcated area of the seabed. Over the next month, 250m3 of sand was pumped into ballast tanks in order to secure the unit in its position. Following the completion of sand ballasting, 16 scour mats were placed around the unit. Divers have since reported that the scour mats are effective in preventing erosion around the unit. A one-in-40 year storm has since been experienced with no significant influence.

A 125mm internal diameter water pipeline was connected to the CETO pumps as well as two airlines and a fibre optic cable for control and measurement purposes. The unit was then sealed and the inside pressurised. The CETO unit then immediately pumped seawater successfully on shore. The underlying principles of CETO were thus proven in the very first hour of its operation.

Data collected over the year-long trial has been used to develop accurate computer models to determine optimum water pressures under varying wind speeds, direction and sea conditions. Utilising advanced computational dynamics software used for designing cars and jet airliners, extensive computer modelling has led to the development of a virtual wave tank, which is a useful adjunct to CETO I and its offshore and onshore research facility and test bed.

Burns says that this virtual wave tank is key to the design’s success; as is that fact that REH uses a lot of off-the-shelf technology, such as sub sea piping and valves from the oil industry and existing Swiss Pelton turbines and RO equipment.

‘We were not reinventing the wheel, so we were able to focus our efforts on the key system for this form of wave power conversion – a novel, sea water-lubricated, seabed-anchored underwater pump,’ he says. ‘On CETO I, this pump was driven by wave acting on a diaphragm but with CETO II, the pump will be driven by waves acting on a buoy which floats safely just below the water’s surface and is connected to the pump by a cable.’

The up and down action of the wavefront moves the buoy, driving the pump, which in turn forces high pressure saltwater through a pipe 300m to shore where the turbine and RO units are based.

It is hoped that CETO II, which is protected by a family of patents, will exhibit a step-change in performance and efficiency compared with CETO I. The newer model is designed to be deployed in arrays in 20 to 50m of water. In this way, the system is very scalable with additional units able to be added at anytime.

On the basis of real time data accumulated over 2005-06 from the operation of a CETO I unit located off Fremantle, computer modelling suggests that very promising outputs can be obtained from CETO II units. The following projections are based on current design parameters, which may change as the project matures and CETO II units would be required to be located at suitable sites – off many areas of the western/southwest UK coastline which is particularly well served by ocean waves, or for example off the south west coast of western Australia.

REH cites a big advantage of CETO as its ability to produce power or freshwater or a combination of both. The UK, Australia and many other areas now experience water shortages (a problem that has been especially prevalent this summer in the UK’s southeast). In Australia, Sydney is currently planning desalination plants due to water shortages and Perth’s desalination plant is due for completion this year.

The Perth plant will produce 45Gl/yr of freshwater and requires 24MW to operate. An array of 225 CETO II units occupying 2.25ha of seabed could produce about the same amount of water as the desalination plant. Furthermore, not only do the units consumer no power, they would generate a surplus of about a third of the power capacity that the traditional desalination plant requires to run.

Its creators have designed the CETO technology to be eco-friendly. In some locations, hyper saline water outfall from desalination plants is shaping up to be a controversial issue, with arguments put that where the water body where discharge occurs is fairly immobile, excess salt concentration in the outfall will be harmful to marine organisms. CETO is immune from this problem as multiple return pipes from an onshore power and desalination plant, routed back to the wave converter array area, effectively disperse any concentrations of saltier water through wave action and turbulence.

CETO technology, in addition to being greenhouse friendly, does not impact negatively on marine organisms. Indeed the opposite is the case, with transects showing that what had previously been a marine desert had actually been transformed, with many plant and animal species provided with a more friendly habitat and thereby attracted to the seabed area surrounding the CETO installation.

The current enthusiasm for renewable energy sources is an encouraging sign for the CETO wave generator, says Mike Proffitt: ‘Renewable energy is fast growing in popularity in the face of environmental issues, skyrocketing fuel costs and a commitment by governments to encourage alternative energy research and development.

‘The current outlook is fantastic for renewables,’ he continues. ‘We envisage that after CETO II, commercial units will be available for deployment within five years. The beauty of these units will be that they will be able to be mass produced and deployed in highly scalable arrays offshore.’