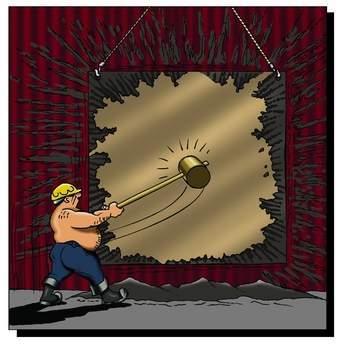 Current obsession with so-called carbon emissions has diverted opprobrium from old-fashioned acid rain. Only a few decades ago this pollutant made coalfired power stations into hate targets almost as good as nuclear ones. The fly ash from coalfiring of course contains rain-acidifying sulphur and nitrogen oxides: and electrostatic precipitators are among the well-known countermeasures.

Unfortunately fly ash particles tend to accumulate on precipitator plates, and so much so that big hammers may be needed to ‘debond’ the particles and release them into the hoppers provided. This ‘rapping’ can damage the plates, however, and German station operators have been trying something gentler – stimulation by very intense low-frequency sound – instead. It has worked, but not always, and research has been mounted at Liverpool University in the UK to sort the problems out. So I learn from Research Intelligence, the university’s newsletter.

The university’s acoustic research unit wants to find out whether and how air-driven horns could generate enough ‘sound pressure’ to remove fly ash from collection plates not only on a lab scale but also optimally in the large reverberating spaces enclosed by precipitators. The researchers draw encouragement from the biblical example of Jericho, a fortified city which is reported in the Old Testament to have been subdued after successive circuits by trumpet-blowing priests caused its outer wall to collapse.

Shrewdly, the investigators do not bank on developing the technique to blast away modern fly ash with state-of-the-art acoustic instruments in western countries. They have in mind far less the ageing coalfired plants of Europe than the spanking new ones to be built elsewhere. These stations are projected in their hundreds, for example in China.

And the Liverpudlian acoustics advocates modestly admit that, although excavations have shown the Jericho collapse to have been more than mythical – the city’s outer wall did fall down on a single occasion – archaeologists blame a fortuitous earthquake rather than hornblowing.

Does sication deserve another try?

I know a living relic of the middle of last century. He is old enough to reminisce about the days when English-speaking engineers first whispered about ‘direct digital control’ of processes, and even about ‘optimalising’ them. By that time the ‘automatised’ processes of post-war years had been linguistically streamlined into ‘automated’ ones. Naturally, following in automation’s footsteps, optimalisation soon became optimisation: but I gather that digitisation was never legitimately reduced to digitation.

In those days (my relic recalls) there was also progress, though more falteringly, toward globalisation of measurement. The UK objective was called ‘metricalisation’ until tongues were untwisted by turning that word into ‘metrication’. What was meant, however, was more than mere conversion of countries, blocs and humanity generally to the old metric system. The envisaged infrastructure for measurement, at every level of precision, all over the world, was to be the Système International d’Unités or SI, the then-modern form of metric system that was ‘finally’ agreed in 1960.† But finality, as ever, proved elusive. The SI of 1960, for example, had six base units. Today it has seven.

Despite idealism and enthusiasm the adoption of SI units has been gradual and patchy. Not even terminological tweaking has helped. My relic’s eyes still glisten slightly when he remembers a dismal British attempt to follow truncative precedent and dub the process of conversion ‘sication’.

The process of conversion remains rather slow although measurement and standards buffs try to help it along: as when they publish useful guides and explanations from time to time.†† Guides are certainly necessary, not least for the likes of your columnist. By way of illustration I confess that, without my wallet-fitting guide from the UK’s National Physical Laboratory, I should not be able to distinguish reliably between the SI prefixes for 1024 and 10-24, when occasion arises. The former is of course Y (for yotta) and the latter y (for yocto).