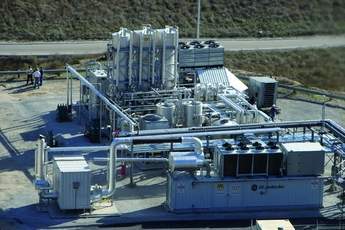 A GE Energy Jenbacher landfill gas engine is to power the world’s first commercial LFG to LNG (landfill gas to liquid natural gas) conversion facility designed to create alternative fuel for vehicles. The LNG produced at the new facility is primarily targeted for use as fuel in mass transit and other large vehicle fleets in the Los Angeles, USA, region.

According to the federal Landfill Methane Outreach Program, a project of this size provides annual emissions benefits equivalent to removing more than 125 000 vehicles. LMOP was established by the US Environmental Protection Agency to reduce methane emissions from municipal solid waste landfills by supporting LFG-to-energy projects.

Its power output is used mainly in the gas compression and liquefaction stages of the LNG production process.

The treatment facility will initially produce approximately 5000 gallons of LNG per day and, in full production, more than 36000 gallons/day, with a methane content of 97% or greater. The feasibility of converting landfill gas to LNG can be attributed in large part to key technological advances such as Prometheus’ unique, proprietary method for removing CO2 through cryogenic separation.

“We are proud to collaborate with Prometheus Energy on this landmark landfill gas-mass transit initiative,” said Prady Iyyanki, CEO of GE Energy’s Jenbacher gas engines division. “This project is designed to offer significant environmental and economic benefits to Orange County and the entire state.”

Prometheus chose GE’s Jenbacher engine for its ability to meet what are some of the most stringent air quality standards in the USA.

The project also greatly reduces the fuel transportation cost and the distance over which LNG must be transported. Existing LNG supply sources are located as far as 840 miles away from customers in Southern California.