Facing up to irrigation challenges

Dam building made way for the rapid development of irrigated agriculture in Australia during the last century. Now however, managing water supplies for this important economic activity is a challenging business, made more complex due to extreme climatic conditions and over abstraction of river water. Willem F Vlotman and Suresh Kulkarni explain more. 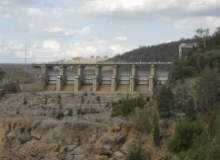 As the driest inhabited continent on the earth, Australia has always been water conscious and during the 20th century dam building became an industrious response to water supply problems. The cross-boundary basin transfer of water, in projects such as the Snowy Mountain Scheme in the Murray-Darling Basin, also proved to be integral to these dam-building efforts.
Such ability to store and release water in dams resulted in irrigation areas expanding significantly from 1930-90. Expansion slowed however in 1990 as a result of a partial cap on irrigation diversions in the Murray-Darling Basin. Today, through 561 large dams, a storage capacity of about 84Bm3 has been created providing more than 4300m3 per capita of dam storage capacity.
Crucial to the Australian economy, irrigation is required for the production of crops such as rice, cotton, sugarcane, grapevines, fruits and vegetables. More than 41,000 businesses generate in the region of A$10B a year from irrigated agricultural production, which covers 1.84M ha of land and uses 6.6 Bm3 of water (2009-10). Furthermore, sixty-five percent of total Australian water consumption is required for agricultural water use. Government or private irrigation schemes account for 39.5% of this (2009-10), with other supplies being sourced from groundwater (31.3%), surface water (25.4%) and recycled/reused water amongst others(3.8%).

Australia is facing significant challenges. As a result of climate extremes and over extraction of water for consumptive use and agricultural production, many Australian rivers are rated to be in poor ecological health. In response to this a range of water sector policy reforms have been taking place.

The Australian government says that it is committed to making urban and rural water use more efficient, secure and sustainable and is implementing substantial investments in the water sector through the Water for the Future programme. This is built on four key priorities:

These priorities are being delivered through a ten-year, A$12.9B investment in strategic programmes including:
– Infrastructure investment to help water users adapt to a future with less water.
– Purchasing water for the environment.
– A renewed commitment to water reform nationally.

The Murray-Darling Basin is a region which is central to agriculture in Australia, and is being used as a major pilot area for such new initiatives. Almost a quarter of all agricultural land is located there and in 2009-10 it accounted for:
– 53% of all irrigated agricultural land.
– 54% of irrigation water applied.
– 37% of Australia’s irrigated agricultural businesses.
However, since reliable climate records began in the 1820s, the Murray-Darling Basin has experienced ten significant droughts and 11 major floods in various parts. This has made it an extremely challenging environment for agricultural production. For example after ten years of drought to 2009-10, the basin’s water sources had declined to a poor state of health but high rainfall from the end of 2010 and into 2011 restored water in most storages. Wetlands and floodplains were inundated for the first time in decades. Although drought conditions have now abated, it is widely recognised that without fundamental reform and rebalancing of the consumptive and non-consumptive pools, the ecological health of the river system will continue to decline. New climate change modelling predicts that rainfall will decline across the more heavily populated and farmed southern half of the country, ie the Murray-Darling Basin.
The volume of water extracted across the MDB is being reviewed by the Murray-Darling Basin Authority (MDBA) as it develops a basin plan. The plan will establish new sustainable diversion limits or caps, which incorporate groundwater and surface water to ensure the sustainability of water resources and restore river health. The MDBA has proposed limiting surface water use in the basin to 10.9Bm3 per year which would require a reduction of 2.8 Bm3 compared with 2009 levels of water use. As part of achieving these readjustments in water use the Australian Government is buying back permanent water entitlements directly from irrigators in order to restore the balance between water for human use and for the environment.

In December 2011, the draft basin plan was released for public consultation which ended in April 2012. The primary focus of the plan is to set binding ‘sustainable diversion limits’ on water use to ensure enough water to meet environmental needs.

Changes in the future

There are significant challenges confronting the Australian irrigation industry. Predictions of less water availability and reliability as a result of climate change, plus increased demands and competition for rural water (such as government purchase of entitlements for environmental flows and urban water suppliers), both have to be tackled. Heeding recognition of the fact that there is likely to be a need to double global food production over the next 40 years to meet increasing population and nutritional expectations, the Australian government and irrigation industry are preparing to face these challenges.