Exhausted and in Tiers

Progress report on new engine developments at UK genset maker Perkins, following the rationalisation of its range with that of Caterpillar and under the impetus of increasingly rigorous emissions legislation. 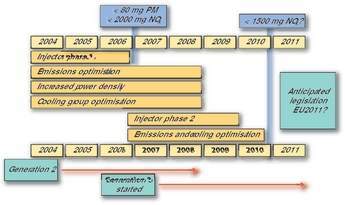 Emissions regulations in the USA (first implemented in 1996, in stages known as Tiers) and Europe (first Stage 1999) have been the major factor for some years now in shaping diesel engine design, both on and off road. Up to now these regulations have not been onerous, but during the next few years Tiers 3 and 4 in the USA and Stage 3 in Europe will start to take serious effect. Prudent manufacturers have been making the necessary modification for some time. Stafford manufacturer Perkins, which supplies a significant portion of the world market for units under 1 MW, decided that it was necessary to replace its existing technology following guidelines mainly determined by the emissions limits being mapped out. Within a few years those standards will have converged, and within a few more the rest of the world market will probably have adopted or emulated them. It was necessary at the same time for the company to meet the standards and cost expectations of existing markets.

Meeting these criteria simultaneously made it necessary to embark on a development programme that created as far as possible a linear progression of models meeting increasingly tough legislation but with an underlying interchangeability – essentially, commonality and long lifetime of major parts – and the ability to accept pre-determined bolt-on emissions refinements. The former confers advantages in tooling, stock and production costs on the manufacturer, and in investment, spares and service costs on the user. The latter allows a more or less seamless progression up the emissions heirarchy for existing machine designs, the so-called ‘future-proofing’ approach, as well as a degree of reverse engineering appropriate to the unregulated markets.

Figure 1 shows the milestones of US Tier and EU Stage regulations, and the technology advances that will be applied by Perkins to meet them. The reference to turbos is to say that significant advantages can be gained from the progress that has been made in the ability to match turbos to engines at Tier 2 and 3 level, but that at Tier 4 more significant changes have to be applied to meet the standards.

The process of upgrading is typified by the case of the 2800 series, which will be available in October this year in EPA Tier 2/EU 2007 certified models with next generation electronics and a prime power increase from 635 to 650 kVA but as a straight drop in for the Perkins units it replaces.