Europe’s cleanest fossil fuel plant about to come on line

Naturkraft’s 420 MWe combined cycle Kårstø power plant, Norway’s first large scale gas fired plant, is expected to be in commercial operation from November 2007. With NOx emissions of 2 ppm it promises to be the cleanest fossil fired power plant in Europe. This demanding target is to be met by a huge SCR deNOx system, currently undergoing commissioning. 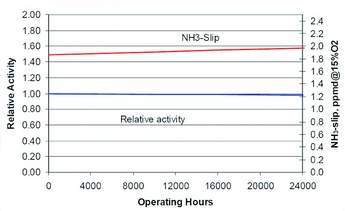 The SCR deNOx process is the most efficient process available for the removal of NOx from flue gases. It was first introduced in Japan in the late seventies and then approximately ten years later in Germany. The majority of SCR deNOx plants have been installed in power plant boilers but the technology is finding increasing application in waste incineration plants and other kinds of industrial facilities, many of them in the chemical industry.

In the USA, the SCR deNOx process has been implemented in a significant number of coal fired boilers in the north eastern states within the last decade, and a large number of gas turbines have been equipped with SCR. Within the EU, existing legislation will in due course result in SCR deNOx units being mandatory at all new coal-fired power plant boilers.

Conditions of the permit

There were several reasons for installing a deNOx catalytic system at the Kårstø plant.

First, it needs to comply with a powerful ‘green’ tradition. Up to now all power production in Norway has been hydroelectric. Naturkraft’s gas plant is the first commercial power plant in the country to use fossil fuel. Despite the fact that Norway does import some power originating from coal fired power plants, compared to which a gas fired plant would, even without special flue gas treatment, be quite clean, it is regarded as a polluting power producer compared to hydropower plants and the greatest efforts must therefore be made to reduce emissions as much as possible.

Second, it has been debated for almost two decades whether the country should increase its power production by using some of its own domestic gas resources rather than exporting them to Europe. The main political issue has been Norway’s CO2 obligations under the Kyoto protocol. However, the obligations set out in the Gothenburg protocol regulating NOx emissions in northern Europe are also a considerable challenge for Norway.

Further, the area around Kårstø, in particular its moorland habitats, is very sensitive to air pollution and over-fertilisation owing to its thin soils.

For these reasons the NOx and ammonia-slip (excess ammonia being carried over into the flue gas) emissions permit issued to Naturkraft has a very demanding maximum of 8 ppm total, incorporating a 5 ppm limit for each plant component.

As the first stage of NOx reduction, Naturkraft, a joint venture of Norwegian energy majors Statkraft and Norsk Hydro, has installed 24 dry low NOx burners. The burners, consuming approximately 15 kg of natural gas a second, are optimised to keep NOx and CO production as low as possible, based on tight control of combustion temperature and excess air. The NOx emissions from these kinds of burners would be approximately 20 ppm, which is significantly lower than for older combustion techniques, but carries a small penalty – owing to the lower combustion temperature the performance of the gas turbine is also slightly reduced.

To help meet its NOx permit obligations, Naturkraft is allowed to install NOx reduction technology at third parties locally, for example in local industry or ferry transportation, but its primary NOx reducing agent is the deNOx catalytic system.

The principle of SCR

During selective catalytic reduction the catalyst operates mainly on the selected compound, and (in chemical terms) reduces it, that is, it decreases its state of oxidation, by adding a reducing agent to the flue gas. In contact with a catalytic surface, the reducing agent and the nitrogen oxides react to form nitrogen and water, without the formation of any secondary pollutants. The catalyst itself is a true catalyst, taking part in the reaction without being depleted.

SCR deNOx equipment can in some cases be retrofitted, but in this plant it is installed as an integral part of the heat recovery steam generator, as shown in Figure 1.

Anhydrous ammonia is the cheapest but also involves the greatest risk, in transportation, storage and handling. Aqueous urea, usually at 40%, is the least harmful but most expensive agent, and carries the disadvantages that it freezes easily and that the spray nozzles can easily clog up if the water of solution evaporates. Therefore aqueous ammonia, usually at 25%, is often used. It offers acceptable levels of safety combined with moderate operational cost.

For marine power production, usually only aqueous urea is acceptable as a reducing agent. The urea is injected into the hot flue gas, and decomposes according to equations (i) and (ii), to form ammonia.

The Naturkraft plant will use 25% aqueous ammonia, consumed at a rate of approximately 25 m3 a week. It will be delivered in bulk by road tanker, and pumped to two storage tanks each of 50 m3. Special precautions must be implemented during tank filling to prevent the escape of ammonia gas. Possible pressure build-up in the tanks is prevented by leading the hygroscopic ammonia gas through a water trap.

In use, aqueous ammonia is pumped from the storage tank to the injection skid. It is first injected by spray nozzles into an evaporator where a small proportion of flue gas from the HRSG is used to evaporate the aqueous ammonia droplets, which dilutes the resulting ammonia gas. The mixture of ammonia and flue gas is then injected into the HRSG, upstream of the catalyst, through approximately 9600 nozzles, to spread the ammonia homogenously over the catalyst surface. A homogenous distribution of ammonia in the flue gas is important to achieving efficient NOx reduction and a low ammonia slip, and thus efficient utilisation of the catalyst. At a high degree of reduction, the importance of homogenous distribution increases. The challenging task of adjusting the nozzles for optimised distribution of ammonia is performed during commissioning.

The deNOx catalytic material for the Naturkraft plant is supplied by Haldor Topsøe and is based on a porous, fibre-reinforced titanium dioxide (TiO2) carrier homogeneously impregnated with the SCR-active components tungsten trioxide (WO3) and vanadium pentoxide (V2O5).

The result is a catalyst with an extended-area, porous structure (Figure 2) with its active components finely dispersed on the entire surface and consequently presenting a large number of active sites. The catalyst is very resistant to thermal shock as the catalyst geometry and material prevent accumulation of thermal stress.

The injected ammonia reacts with the nitrogen oxides, nitrogen monoxide (NO) and nitrogen dioxide, across the surface of the catalyst (Figure 4) according to the following equations.

The following two unwanted reactions can also take place at the surface of the catalyst:

For these reactions to occur the temperature of the catalyst has to be above 200 °C. In operation they would typically be between 250 °C and 450 °C, and for the Naturkraft plant approximately 340 °C . The reactions (iii) to (vii) above are exothermic, causing a slight temperature increase in the flue gas in passing over the catalyst. And in homogeneous gas phase at temperatures of 900 °C to 1100 °C, the reactions (iii) to (v) can take place in the absence of a catalyst.

The mechanism of the deNOx reactions in a TiO2 based catalyst has been studied in detail by Topsøe chemists who identified the following individual steps.

1. The reactants NO and NH3 diffuse through the gas film and into the porous catalyst.

2. The ammonia is absorbed on the surface.

3. The nitrogen oxides react with ammonia with the formation of nitrogen and water.

4. The non-polluting products nitrogen and water vapour are released.

5. Oxygen from the flue gas re-oxidises the catalyst.

The reaction rate is controlled by diffusion through the gas film, by diffusion in the porous wall and by the intrinsic reaction rate. Topsøe has carried out substantial research on the details of the SCR deNOx reaction mechanism, which has suggested the processes for the catalytic cycle given in Figure 5.

Briefly, the reaction involves both acid-base and redox steps of catalysis. The reaction is initiated by adsorption of ammonia at Brøndsted acid sites (V5+-OH), followed by an ‘activation’ of ammonia through a reaction with a redox site (V=O) on the catalyst surface. The ‘activated’ ammonia then reacts with gaseous or weakly adsorbed NO under the formation of gaseous N2 and H2O together with the formation of V4+-OH. The catalytic cycle is completed through the

V4+-OH site being oxidised by O2 to regenerate the original V=O site.

Performance of the catalyst

The catalyst is designed so that at base load operation it will reduce the flue gas NOx concentration by 90% from approximately 20 ppm down to around 2 ppm. The degree of deNOx is a function of several factors. For instance a high inlet NOx concentration will result in a lower degree of deNOx, while a higher catalyst operating temperature will result in a slight increase.

SCR deNOx is a passive system and will reduce the NOx concentration as long as ammonia is injected. There is redundancy in all components of the ammonia dosage system, other than in some stationary parts like the evaporator.

In addition, two catalyst ‘coupon holders’ are mounted immediately in front of the SCR catalyst matrix. Each coupon holder contains 19 catalyst samples. At yearly intervals a sample can be selected at random and send to the manufacturer Topsøe for analysis of catalyst activity, which would show up any ‘poison’ present in the material and give early warning regarding installing a second catalyst layer or substituting the entire matrix.