EU assistance to Ukraine in the last ten years

After the Chernobyl nuclear accident and particularly after independence in 1991, Ukraine received significant technical assistance from the European Union. Radioactive waste management, spent fuel management, decommissioning and remediation assistance are summarized here. By B. Batandjieva-Metcalf, B. Farrar, P. Daures and E. Maier 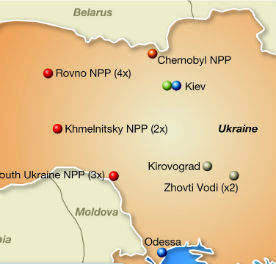 Ukraine has an unusually complex situation with respect to managing radioactive waste and spent fuel.

It has fifteen VVER units (two VVER-440s at Rovno and the rest VVER-1000s) in operation at four sites and a fuel fabrication plant under construction. In addition, there are two research reactors and six interregional specialised enterprises for disposal of institutional radioactive waste. These disposal facilities are currently considered as temporary storage facilities. At the Chernobyl site there are three shutdown RBMK reactors and the damaged unit 4, surrounded by a 30 km exclusion zone, where more than 800 temporary radioactive waste facilities are in place as a result of the accident in 1986. A new Vektor disposal site at Chernobyl was recently licensed to accept the plant’s decommissioning waste. The Buryakovka disposal site, which was built shortly after the accident, is being assessed and considered for extension.

In addition, there are institutional wastes being generated at research centres, hospitals, and so on (for example, there are more than 3000 users of sealed sources) and radioactive waste from mining and milling facilities and legacy sites.

The radioactive waste and spent fuel inventory will increase in the future due to the operation of the current power plants, remediation activities, the use of radioisotopes, development of new nuclear facilities and the return of vitrified waste from spent fuel reprocessing in Russia in the period 2013-2018.

A number of laws on radioactive waste management are in force in Ukraine. An independent regulatory body (SNRIU) oversees the safety of radioactive waste management facilities and activities (including eight regional inspectorates), supported by a technical support organisation (State Scientific and Technical Centre for Nuclear and Radiation Safety). Its legal framework is being improved in line with international safety standards.

The European Union has provided support to Ukraine on nuclear safety, mainly through the Technical Assistance to the Commonwealth of Independent States or Tacis (1991-2006) nuclear safety programme and the European Commission’s Instrument for Nuclear Safety Cooperation (2007-2013).

This technical assistance provided support to: the regulator; organisations dealing with radioactive waste from Chernobyl’s damaged unit 4 and institutional waste; and nuclear plant operator NNEGC Energoatom. It also covered plans for decommissioning and remediation of contaminated sites from the Chernobyl accident and mining and mineral processing facilities and activities.

The Tacis programme was mainly intended to enhance the economic and political transition in CIS countries. This included measures for improvement of nuclear installation safety and radioactive waste management.

The follow-up INSC instrument started in 2007. This instrument finances measures to promote nuclear safety, radiation protection and the application of efficient and effective safeguards of nuclear material in third countries. The annual INSC contribution for radioactive waste management in Ukraine, excluding the contributions to the Chernobyl Shelter Fund (CSF) and Nuclear Safety Account (NSA) has amounted to €7-9 million per year in recent years.

The first INSC instrument was completed 2013 and it is being followed by a new Instrument for Nuclear Safety Cooperation (INSC II) for the period 2014-2020. Remediation of mining legacy sites, geological disposal of spent fuel and high-level waste, radioactive waste management and decommissioning of installations are expected to be components of the programme and these technical areas are also expected to be maintained in the European Union assistance to Ukraine.
To plan and implement the numerous European Union projects on radioactive waste management in Ukraine effectively, in 2009 Ukrainian organisations developed a Strategic Road Map on Radioactive Waste Management, Nuclear Facilities Decommissioning and Remediation with the support of the European Commission Joint Support Office. Recently revised, it covers about 50 projects over a period of 20 years.

The Road Map activities can be implemented only with the financial support of Ukraine, alongside donor funds. A Task Force on Radioactive Waste Management, Decommissioning and Remediation set up by the European Commission provides valuable assistance in the effective planning and implementation of European Union support. It is important to co-ordinate INSC support with other international and national projects.

Although significant progress has been made, there are a number of areas where work continues and is planned. The European Union is planning to continue its support to Ukraine through the new INSC II (2014-2020), taking into account the development of the current situation in Ukraine. Work is under way to develop a clear project scope and minimise risks for each project so activities can be implemented within three or four years. In line with the Ukrainian national strategy and priorities for radioactive waste management, the European Commission will focus its assistance on some of the most important tasks for Ukraine in the near future: the operation of LRTP and ICRM, and the improvement of safety and remediation of legacy sites to support a sustainable infrastructure for long-term safety of spent fuel and waste management in Ukraine. It is recognised that the successful implementation of the European Commission projects relies on the effective cooperation with the beneficiaries/end users and the contractors, and coordination with the work performed by other international and national donor organisations.