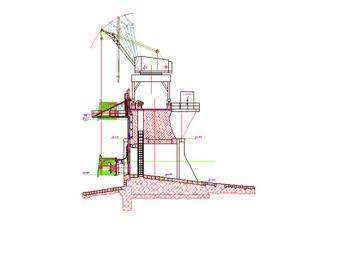 HYDROMATRIX is a new concept of hydraulic energy generation advanced by va-tech-hydro, designed to be easily integrated into existing dam structures or weirs. The Hydromatrix turbine-generator unit consists of a stay ring with fixed stay vanes, a fixed blade propeller type runner of aluminium-bronze and an induction type generator directly connected to the turbine runner. The stator forms a watertight steel fabricated housing and is mounted to the stay ring. Two bearings situated within the bulb support the generator rotor, shaft and runner rotating assembly. The shaft seal is a mechanical face seal type and is located within the generator housing.

The Hydromatrix module consists of a stiff, steel fabricated structure, which supports the turbine-generator units. Rubber seals are provided at the bottom of the module sides to minimise bypass leakage. The module also includes steel fabricated draft tubes with integrated control gates. The draft tube shape and length are optimised to achieve high turbine efficiencies. Depending on the site conditions trash racks or bulkheads can be incorporated into the module steel structure.

The design of the system allows access to all components without disturbance of the overall plant operation and its expected lifetime is identical to a conventional hydro power concept.

The electrical equipment is a standardised container type switchgear station, which includes the generator switchgear, the control and protection system as well as the reactive power compensation. For larger module sizes this electrical switchgear is placed inside the module. Standardised PLC systems are used for full automatic operation of the entire power station. The system is completed with step-up transformers and high voltage switch gear equipment located on or close to the dam.
Few auxiliary systems are necessary to operate a Hydromatrix plant. Where the capacity of the existing crane is insufficient to lift the modules, a new crane with rails can be supplied and installed. Depending on the water quality, a trash rack cleaning machine can also be supplied, as well as an emergency generator to ensure an independent power supply for the auxiliaries.

In 2001, VA Tech Hydro received its first large contract for a Hydromatrix power plant. The contract was placed by National Electricity Corporation (NEC), the Sudanese state owned electricity producer and distributor. The total contract value is worth US$36M. NEC awarded VA Tech Hydro with the supply of 40 Hydromatrix power modules, each with two turbine generator sets, for 40 of the 50 openings of the Jebel Aulia dam in Sudan at the White Nile, about 40km south of the capital, Khartoum. The contract also included the required mechanical and electrical auxiliary systems as well as a new dam crane.

The Jebel Aulia dam was built in 1933-37 and is used mainly for irrigation purposes and flood control. In March 2004 the first 20 Hydromatrix turbines were handed over to the customer for commercial service and have been supplying electricity into the NEC grid. Installation work on the next units has already begun, with ten turbine generator units commissioned every two months. Full operation of the power plant is scheduled for early 2005. The new power plant will contribute 30.4MW to the generation capacity in Sudan.

Sudan currently has an installed electricity generation capacity of 580MW, managed by NEC. It is composed almost equally of thermal (mainly oil) and hydro power. The latter varies greatly over time, due to rainfall patterns. The main generating facility is the Roseires dam located on the Blue Nile river basin approximately 500km southeast of Khartoum. Roseires has an installed capacity of 280MW, but output varies greatly as water levels on the river rise and fall throughout the year.

In 1968, the original turbines at Roseires were supplied and installed by VA Tech Hydro. Recently, the company has been awarded contracts to rehabilitate these turbines following wear and tear caused by the aggressive and heavy silt load of the Blue Nile.

The continuous engagement at the Roseires power station has led to the formation of an informal partnership between NEC and VA Tech Hydro, under which VA Tech provides supplies, expert services and consultations in order to effectively support and assist NEC in its effort to maintain and improve electricity supply to Sudan’s growing economy and the private consumers.

installation
The Hydromatrix power plant in Jebel Aulia consists of 80 turbine-generator-sets, which are installed in 40 modules by pairs. One module is equipped with two submerged, 380kW horizontal propeller turbines. Each turbine has a 1120mm diameter three-bladed runner precision cast of aluminium bronze. Generators are inducion type.
Since the Hydromatrix makes use of the existing dam structure, only very minor civil construction is needed. This is considered one of the predominant advantages of the technology.

The modules are shipped to the Jebel Aulia dam where they are installed into the existing water passage structure.

The on/off operation of the turbines will be accomplished by means of the existing control gate. Both turbines of one module will be turned on or shut off simultaneously. The gate has only an open and closed position.

Ten of the 690V asynchronous generators feed into one common container type generator switchgear substation. This arrangement is one out of eight lots. Each one of these substations has its own control and step up transformer and also includes the reactive power compensation.

A total of eight of these substations are installed at the dam site, on the opposite side of the machines and handle the total plant output of the eighty units. From these eight substations, individual 33kV cables run to a 33kV station located beside the river. The whole power plant is managed from a central plant control station. With this concept it is possible to operate each lot independently from the others.

For the emergency power supply a diesel generator unit is installed and acts as a backup power supply in case of loss of net-voltage for the control gates gear motors and the module crane.

The modules are built like a bulk-head-gate, so they can quickly be lifted out of the water giving way to extreme floods and permitting easy maintenance and repair directly on the pier. The large number of modules provides a higher availability if a module fails compared to an earlier NEC investigated conventional pit-turbine solution.

By using one or two spare-modules even preventive maintenance will become possible, if modules are exchanged in regular cycles. The NEC personnel have been trained in this special kind of maintenance. The simple design of the modules with only two movable parts [turbine and draft-tube gate] provides a much smaller failure-potential than a bulb- or pit turbine, with their guide-vanes, runner-blades, servomotors, and sophisticated oil- and cooling-water-circuits.

There are also no expected civil O&M costs, since there is no power house and no dredging and silt-removal requirements.

The potential applications suitable for the Hydromatrix concept are existing navigation dams, irrigation dams, intake towers and sluice in shiplocks. Currently VA Tech is undertaking several Hydromatrix projects internationally. In addition, Verbund-Austrian Hydro Power and its project partners EVN and Wienstrom has just awarded VA Tech Hydro together with Porr Technobau and Verbundplan as consortium leader a contract to provide a small-scale hydro power plant utilising the Hydromatrix concept in Nussdorf near the Schemerl Weir at the intake of the Vienna Danube Canal in Austria.
In June 2004 the new StrafloMatrix concept – the next generation of Hydromatrix – will be inaugurated at the Agonitz hydro power plant near Linz in Austria.

The unique feature of this system is the innovative integrated turbine runner-generator rotor design, where the outer edge of the turbine blade supports the generator rotor – both turn under flow as a single unit.

The StrafloMatrix configuration has significantly reduced physical dimensions in the direction of flow, allowing for applications where space is limited. It also operates synchronously with the distribution system, an advantage in applications where induction generators may not be acceptable.

Harald Schmid is senior manager for project development and sales at VA Tech Hydro in Linz, Austria, and is coordinator for the worldwide activities regarding Hydromatrix. For more information, visit www.vatech-hydro.com