Eco 100: talking the torque and getting into good shape for O&M maintainability

Ease of maintenance, enhanced efficiency, high reliability and low noise have been among the key considerations in the three year design process that has culminated in Alstom Ecotècnia’s new Eco 100 turbine (pictured right and below), which is rated at 3 MW and boasts a rotor diameter of 100 m. It features a distinctively shaped nacelle designed to facilitate access to key equipment. It also uses Ecotècnia’s proven concept that the drive train should experience only pure torque and no bending loads – for maximum reliability and longer life. 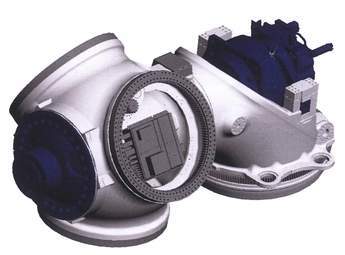 As the graph left (source, DEWI) shows the history of wind turbine development over the past couple of decades can be seen in terms of progressively larger rotor diameters. As the small blue area on the right indicates we now appear to be entering the era of the >90 m rotor. With the recent official inauguration of its new Eco 100 machine, Alstom Ecotècnia feels particularly well placed to address what it believes will be a burgeoning sector of the market, and the next phase for the onshore wind business. The Eco 100 combines a large rotor diameter, 100 m, for maximum exploitation of a given wind resource and low tip speed (therefore low noise), with large capacity, 3 MW, giving high output per unit of land occupied.

The inauguration of the first Eco 100 – in the presence of the President of the Generalitat de Catalunya, Jose Montilla Aguilera – took place on 25 July at the La Collada wind farm, El Perello, Tarragona, Spain, about 150 km south of Barcelona.

The developer of the site, Eolica del Perello (owned by entrepreneurial wind enthusiast Joan Fages), is planning to purchase this machine on successful completion of current commissioning and prototype tests (which will include power curve, power quality and noise emission certification by DEWI and Windtest, with type certificate expected by the end of this year). Eolica del Perello plans another three Eco 100 units at the site (alongside 71 smaller existing wind turbines (660 kW and 750 kW) already operating there).

Another early customer for the Eco 100 is EDP, for its planned 5 x 3 MW Pièces de Vignes wind farm in France. In fact the machines for this site are already in manufacturing, with commissioning due next year. By the end of 2009 Alstom Ecotècnia expects to have completed some 40 of the new turbines, with interest being shown by wind farm developers around the world.

The main drivers underlying the Eco 100 design, and put on the table at the concept stage some three years ago, are: efficiency; reliability, understandably a key concern of owners, operators and investors; maintainability; and low noise, which has emerged over the years as a major preoccupation for the wind farm designer.

One of the striking features of the Eco 100 is the distinctive shape of its nacelle, with its two housings at the side (see illustration, p 53, second from top). The central part of the nacelle accommodates, in addition to the drive train and generator, the power transformer (which reduces transmission losses between generator and transformer compared with previous Eco models, which have the transformer located in the tower) plus inverter and control cabinets.

The idea of the two side pieces is to provide space for internal access to these systems for installation and maintenance. Internal access for increased maintainability is also provided for the hub, which can be reached from the nacelle (see illustration, p 53, second from bottom).

The two side packs are designed to be separately transportable. Indeed the whole turbine is modularised, with the mechanical components and control systems in the nacelle and hub divided into two major modules, which are joined together at the top of the tower during installation (see photo below, left). The heaviest module weighs 83t and the module dimensions are 4.5 m x 4.3 m x 6.2 m and 4.5 m x 4.3 m x 9.7 m (WxHxD) respectively, facilitating transport and construction, particularly in difficult terrain.

Another key part of the design, which has been a distinguishing feature of the Ecotècnia offering since the mid 1990s and its Eco 44 (640 kW) model, is the rotor support concept. Basically, in the interests of reliability, the only role of the gearbox and shaft is to transmit pure torque from the rotating blade. They play no role in supporting the rotor and are thus protected from potentially damaging bending loads. In other words torque transmission is completely separated from rotor support (see bottom illustration, p 53).

The main rotor bearings are located in the hub, at its front and back, with a mainframe inside the hub. Bending loads are absorbed by the mainframe and in turn transmitted to the tower top exclusively through cast iron structures completely independent of the drive train (see illustration above).

The drive train itself is supported at three points (also illustrated above) with sufficient degrees of freedom to avoid it ever being subject to loads due to elastic deformation of the main frame. This controlled flexibility means that the gearbox is never exposed to anything other than pure torque, even under extreme loading conditions – contributing to reliability and long life expectancy.

Some of the main features of the new turbine are summarised in the table, p 53.

The present Eco 100 has been designed according to the Class II-A specifications of IEC/EN-61400-1, ie a site with a mean annual wind speed of 8.5 m/s and a once-in-fifty-years gust speed of 59.5 m/s, with the ability to operate in wake with high turbulence. But Ecotècnia sees the Eco 100 as the birth of a new platform, or family, of machines (see diagram above), which can be developed in a variety of directions, eg for the Class III (lower speed) wind regime by increasing the rotor diameter even further.