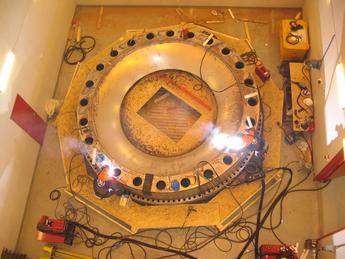 The Svartisen hydro plant is owned and operated by Statkraft, Norway’s largest power producer with an installed base of 9GW. Svartisen (Norwegian for ‘the black ice’), is the largest hydro facility in the Statkraft system, generating 2.17GWh/yr, enough to meet the needs of about 200,000 people. The plant produces energy with two balanced sources of water inflow: rainfall and glacial runoff. The facility includes a 120m high rockfill dam, and utilises a total head of 585m from high water level to sea level. The Svartisen project even features an underground laboratory, created by Statkraft as part of a 100km subterranean maze of tunnels and cave-like rooms under the glacier. Scientists use the lab to study glaciers.

Due to the unusually high levels of silt in the water at the Svartisen site, the hydro turbine has experienced more erosion than other Francis units in Norway – from the commissioning of the plant in 1993 until 2003, the efficiency of the turbine dropped by 2-2.5%. Inspections revealed major damage on guide vanes and turbine covers, and heavy erosion on runners and seal rings. At that point, plans were launched for a major rehabilitation of the machine.

Because of the Svartisen plant’s importance to Statkraft’s overall production capacity, the company wanted to limit any outage to no more than 14 weeks. It was important to reduce the number of shutdowns during the rehabilitation because the cost of a shutdown is so high – much greater, in fact, than the cost of the rehabilitation work itself.

After extensive planning and discussions, Statkraft signed a contract with GE Energy’s hydro business to conduct the turbine refurbishment within the 14-week frame.

Knowing that low outage time was critical, GE had to find methods to shorten the refurbishment time to meet Statkraft’s project schedule. Given the high silt content of the water, combined with the high water head, Statkraft was looking for ways to minimise loss of efficiency and performance due to erosion.

Runners and other components in the water passages of hydro turbines subjected to erosion are usually made of stainless steel, which already has good erosion resistance properties. Adding a coating material provided additional protection from erosion damage to expensive components, thereby reducing overall maintenance costs. More importantly, the coating will contribute to the unit’s efficiency retention by reducing or eliminating the metal lost on the coated components, including the guide vanes and covers.

For the Svartisen project, GE employed a thermal sprayed hard coating, which has been used extensively in the hydro industry for several years to protect components against silt and sand erosion. The thermal spray process belongs in the high velocity oxygen fuel (HVOF) category. GE’s application method involved using spray gun technology to apply the powder coating onto the base material. The powder is made of a metallic binder and tungsten-carbide particles, which increases the erosion resistance.

Because of the size of the components involved, GE conducted a total refurbishment of the Svartisen turbine covers on site, using mobile equipment. While the technology has been used before, this project was the first time the machining and spraying activities had been performed to such strict tolerances to ensure correct clearances and high efficiency onsite. In addition to the thermal spray coating applied at Svartisen, GE has jointly developed a two-layer, nano-reinforced soft coating. This soft coating has been applied to several Francis and Kaplan hydro plants and has shown great potential in controlling silt erosion.

Staying within the tight timetable established for this project required strong teamwork between GE and Statkraft. ‘Our teams worked day and night in order to have the turbine back in operation on schedule,’ says Torbjorn Eriksen, project manager at Statkraft. ‘It was a well executed project, and two years later, the performance of the turbine continues to meet our expectations.’

Statkraft was pleased with the results of the inspection and confirmed that the coatings applied to the turbine components were successful in preventing a recurrence of the serious erosion problems.

The refurbishment was completed in only 14 weeks, a significant achievement for a Francis turbine of its size. The machine was put back into service in July 2003, and since then it has run approximately 18,000 hours with no unscheduled shutdowns

After it had been in operation for more than two years, GE and Statkraft were interested to know how well the newly coated turbine hardware was performing. In February of 2005, Statkraft performed an efficiency test on the Svartisen unit. All test points were within 0.1% of the test performed just after the refurbishment – this is well within the test accuracy of ±0.7%. The results of the testing confirmed that since the refurbishment, the Francis turbine had maintained its efficiency level.

In the summer of 2005, the unit was taken down for an inspection to visually confirm the integrity of the coating that was applied during the 2003 refurbishment. The team went inside the spiral casing and could see and feel that the equipment looked, according to one of the engineers involved, ‘as good as new’, further validating the long-term success of the work.