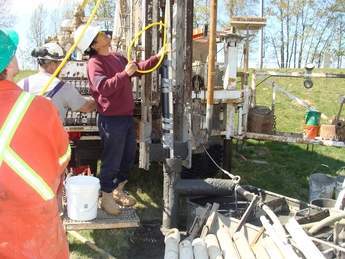 There is no doubt that electricity has become the blood in the veins of modern society. Few would argue that any interruption of its flow means society becomes crippled and dysfunctional.The consequences of a long-term black out on our daily life are far ranging: halts in production and manufacturing; traffic slowing to a crawl; dead telecommunication devices and black television and computer screens. Considering these brutal facts, we realise the crucial role power plants play in today’s culture and why they are called the heart of our modern society.

Based on this reality, the use of protection systems for power plants and critical facilities against natural hazards has become a requirement by regulatory bodies. One of the areas where there has been evident improvement is earthquake triggering systems, also called seismic monitoring or strong motion monitoring systems

Weir-Jones Engineering Consultants of Vancouver, Canada, has introduced an innovative technology that provides advance warning of an impending earthquake. The advantage of this system, known as an Earthquake Early Warning System (EEWS), is its ability to activate an alarm before the devastating waves strike the power plant and dam, giving the operators more time. By shutting off vulnerable critical equipment and carrying out emergency procedures, the impact of the forces due to ground accelerations associated with the earthquake can be reduced significantly.

The company has been active internationally in providing specialised instrumentation and testing services in the field of geo-mechanics and seismic monitoring systems since 1971. It has more than 40 years of experience in the areas of customised data acquisition and seismic system design with applications into the fields of transportation systems, structural engineering and mining equipment.

Weir-Jones conceived the idea of developing an on-site earthquake early warning system when the British Columbia Ministry of Transportation in the province of British Columbia in Canada was looking for a way to protect motorists on a major highway in the city of Vancouver from being trapped in a tunnel during a significant seismic event. Vancouver is a coastal city located in a seismically active area, and experiences numerous small earthquakes. Major earthquakes are known to have occurred in the area, the last large one in the late 1700s sent a tsunami across the Pacific and caused significant damage on the east coast of Japan.

In 2008, Weir-Jones was awarded the contract to design and install the proposed EEWS on the Massey highway tunnel which takes freeway traffic under the Fraser River south of Vancouver. By June 2009, the EEWS was fully designed and deployed at the designated location and the system entered the test phase. Simplistically the system relies upon the output for geophone sensor packages in boreholes north and south of the tunnel. The boreholes are about 2km apart and both sensor packages have to produce similar signals within a predefined time window for the analytical software to declare that a dangerous seismic event is about to take place. In the two years since the system was installed it has successfully passed the qualification tests, is still in operation and has generated no false alarms. In addition, the system has detected earthquakes in California, offshore of Vancouver Island and near the Queen Charlotte Islands off BC’s north coast. In all cases the system decided that these events do not pose a threat to the tunnel and no emergencies were declared.

The basis of operation of EEWS relies on the well-known phenomenon that the destructive energy of an earthquake is related to large secondary shear waves (S-waves) that are preceded by the less destructive primary compressive waves (P-waves).

In other words, when an earthquake occurs the P-waves propagate much faster through the earth’s crust compared with the more destructive S-waves.Based on this principle, the scale of an impending earthquake can be predicted by detecting and analysing its less destructive P-waves which arrive earlier.The time difference between the arrival of the P-wave and S-wave depends on several parameters including the distance and depth of the earthquake epicenter. Normally, for shallow and close epicenter this time difference is a few seconds and for deep and distant seismic events, it is up to two minutes.

Based on this concept, the EEWS detects and characterises P-waves and issues an alarm if the magnitude exceeds the pre-set limit. To achieve this, the EEWS constantly monitors the ground motion in real-time and searches for signatures of P-wavesof a remote strong earthquake.

• Vibration Sensors: the boreholes, one at the north end of the tunnel and one at the south, each containing two sets of tri-axial velocity sensors mounted at various depths. The sensors measure the mechanical vibration and convert them into a voltage signal commensurate with the detected vibration.

• Data Acquisition Units: the continuous signals generated by the sensors are digitised using high resolution (24-bit) analogue-to-digital converters. It is imperative that the acquisition units synchronise all the samples using a reference signal. Time synchronisation is achieved by using the GPS technology. The multi-channel data streams are merged by the data acquisition units.

• Central Processing Computer: the data collected by the data acquisition units are sent to the central processing computerfor event detection and signal processing. The central computer runs the seismic detection and proprietary classification software, which continuously analyses the data streams. The output of the analysing algorithm which runs on the central processing computer is a binary signal, ie yes/no, reporting the absence or presence of a precursor of the strong ground motion associated with the S-waves. This autonomous decision-making is completed in the order of milliseconds.

• Alarm System :if the algorithm that is running on the central processing computer reports that a target P-wave is detected, the alarm system will generate an audio visual alarm and will activate the relays connected to the external alarm sub-system. This external alarm sub-system can be used to control an emergency shutdown mechanism that turns off critical processes at the protected facility to minimise potential damage in terms of human lives and/or valuable equipment.

In general, shutting down a process and specifically a power plant is associated with high costs and should be avoided unless an imminent hazard is foreseeable. For this reason, the EEWS is required to be highly reliable and not prone to failures leading to false alarms. In general, for systems configured like the EEWS, there are three major sources of failure which may compromise the reliability of the EEWS alarm. These sources are hardware, software, and communication links.

To make the system more robust and immune to hardware failures, the EEWS design team at Weir-Jones Engineering has built multiple redundancies into the system to minimise the effect of individual components failure on the overall performance. In addition, only high-reliability components were selected for this system including the sensor types.

In terms of software, the effectiveness of the P-wave detection algorithm was tested extensively in both a lab environment and in the field. For instance, the algorithm has been tested for the ability to reject ground vibrations caused by local activity such as local traffic or construction activities. Furthermore, the software can detect and tolerate some levels of hardware failures. If a subset of the sensors fails the software parameters will be adjusted automatically to work with the remaining sensors without interrupting the system operation. To avoid false alarms the trigger algorithm activates the alarm only when a set of multiple criteria is met.

To enhance the reliability of communication links, the acquisition units are interconnected to the central processing units by means of redundant optical fibres. In addition GPS/timing signals are collected at each location and then shared between these devices. In this way the risk of communication or timing failures compromising the integrity of the overall system is minimised.

The ultimate success of EEWS is measured in terms of reducing the risk to human lives and valuable assets due to seismic hazard. The benefits are obvious:

• It provides an early warning in terms of a few seconds to up to tens of seconds, allowing plant operators to stop critical processes or to evacuate facilities.

• It informs people about the coming destructive ground shaking.

• It reduces potential damage to vulnerable components and sub-systems.

• It records the strong vibration for post-processing and engineering investigations.

Iain Weir-Jones is a mining engineer and President of Weir-Jones Engineering Consultants in Vancouver, British Columbia. He can be reached at iain.weir-jones@weir-jones.com