The Middle Marsyangdi run-of-river plant is being developed in Nepal to help take advantage of the country’s immense hydroelectric potential, writes Ernst Schmid 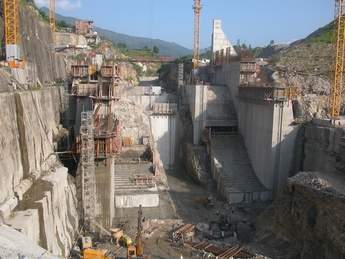 Nepal is a country rich in water and natural altitude differences – two facts that make hydroelectric generation a logical move. As part of the nationwide development plan for Nepal, a new run-of-river hydro power plant on the Marsyangdi river is being realised. Upon completion, the power plant – named Middle Marsyangdi and owned by the Nepal Electricity Authority – will produce 72MW and 400GWh/yr, contributing to an effective amelioration of the power supply in the country.

An international joint venture comprising DYWIDAG International of Munich, Germany, and China International Water & Electric Corp (CWE) were awarded the contract for the project, which is situated within the Lamjung district approximately 170km west of Kathmandu at the foot of the Anapurna range, whose peaks reach above 8000m. The turbines will be delivered by voith-siemens, while the hydraulic steel structures will be provided by va-tech Hydro. Due to the increasing energy demands of the general public, a trend linked to the expansion of industrial sectors in Nepal, Germany’s KfW (Kreditanstalt fuer Wiederaufbau – Credit Bank for Reconstruction) has made development aid funds available for this project.

Once the power plant is completed, further investments in the industrial and service sector are expected, which will help create urgently needed jobs in the Lamjung district.

The construction of Middle Marsyangdi hydroelectric project reached a significant milestone with the breakthrough on 22 January 2006 of the 5114m long headrace tunnel, one of the key parts of the project. After 20.5 months of construction, the excavation works for this tunnel, which has been completed by drill and blast method at 6.4m diameter, excavated in four headings applying the New Austrian Tunnelling Method (NATM), have been successfully completed. Numerous geological challenges had to be overcome, as the tunnel partially crosses quartzite and weak squeezing phyllites. The tunnel-driving has been secured by different systems like steel ribs, grouted rock bolts and fibre reinforced shotcrete. The tunnelling breakthrough was closely followed by the start of concrete lining works. The lining is being produced using a state-of-the-art telescopic full-round formwork which allows for a progress rate within 24 hours of approximately 30m of un-reinforced tunnel concrete lining.

Besides the tunnelling activities, the joint venture has to execute further major structures like three underground desander caverns (140m x 15m x 25m), a spillway with three chutes (92m x 65m x 63m) with an adjacent rockfill dam, an intake structure in front of the desander caverns, an underground surge tank (21m diameter, 5m in high) and the power house with the penstock.

The penstock is partially located in an open cut and cover section underground. At this underground section, a 6.4m diameter tunnel has been excavated from downstream to upstream with inclinations up to 12% and was lead through one of the most critical ground conditions of the project.

Geological conditions encountered at this location did not allow continuing with the conventional excavation and supporting method established for the tunnel excavation at this project. The method required changing to mechanical excavation with pipe umbrella support over a stretch of approximately 100m to areas where sound rock has been met, solid enough to continue with the drill and blast method. The mechanical excavation under the pipe umbrella support system has been successfully executed at this project – and is the first example of its usage in Nepal.

A further challenge at this project is the complexity of the geological parameters prevailing in the area where the spillway and rockfill dam is to be constructed. The nearby paleochannel at the left abutment of the rockfill dam, filled with mudflow material and overlaying permeable river deposits, requires special measures to control the seepage, taking into account the parameters of the highly fractured and sheared quartzite rock forming the basement of the spillway structure.

A major constraint, which had to be carefully taken into consideration when planning the activities to execute – in particular excavation of the spillway construction pit and the execution of the spillway and its adjacent wing walls – is that the river diversion at the dam site has been designed for a 20 year dry season flow only, which provides a discharge by the Marsyangdi river – which is fed by the glacial Tilicho lake located at an approximate elevation of 6800m – with a flow of roughly 420m3/sec.

This fact meant that the upstream cofferdam would likely be overtopped during the months of the monsoon period, which in Nepal are June, July, August and September. The contractor was therefore required to take into account an interruption in activity over these four months.

To minimise this interruption, the contractor proposed that the diversion tunnel should be concrete lined to maximise the discharge capacity and relax the enforced break of construction from four months (June to September) to two months (July and August) – the months when the Marsyangdi river carries its highest discharge.

With excavation works now complete, the concrete works for the various structures and activities are now well underway, utilising a present workforce of roughly 1300 Nepali staff, supervisors and workers, as well as 30 from overseas.