Dealing with cracks and leaks in a primary circuit

Although leaks in the reactor coolant pressure boundary have a low safety and performance significance, they can increase the radiological exposure of clean-up workers. Operational experience of more than 400 events provides some recommendations. By Radian Sanda, Miguel Peinador Veira, Reiner Wenke and Patrice Negri 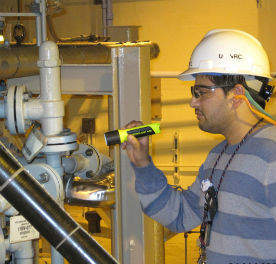 Leaks in the reactor coolant pressure boundary cannot be prevented. Because of this, the technical specifications (or normal operating procedures) allow a limited leak rate and describe actions to be taken if the limit is exceeded. However, any leak from the reactor coolant pressure boundary that remains undetected long enough will raise particular challenges. The total coolant loss may be significant and prolonged outage periods required for recovery. Mitigating the effects of leaks is a continuous task – as is prevention – and as such it requires a review of relevant operating experience.

The European Clearinghouse on Operating Experience Feedback (OEF) of NPPs recently completed a review on this subject with the support of French and German organisations IRSN and GRS. It summarises the analysis of such events reported to the IAEA International Reporting System (IRS) database (irs.iaea.org), the US Licensee Events Reports (LER) database (lersearch.inl.gov) and the French (IRSN) and German (GRS) national databases. The screening period runs for 20 years, from 1991 to 2011 for IRS and LER, and from 1990 to 2010 for French and German databases. In total 408 events were relevant, 144 from IRS, 74 LERs, 129 French reports and 61 German reports. The events were classified into families according to the component affected by leaks and cracks. Each family was reviewed to identify the lessons learned, the corrective actions implemented and recommendations for future improvements. Cross-cutting recommendations were also identified; they are presented below.

As different reporting criteria are used in each of the four databases, no common integrated analysis can be carried out, and any comparison should be made with precautions.

The cracks and leaks had little impact on safety. Most of the events were discovered with the plant in cold shutdown, and their effect on operation was almost negligible (mainly because non-destructive testing or examinations are usually carried out during outages or shutdowns of light-water reactors). Different reporting criteria among the databases meant that non-through-wall crack indications are not usually declared as significant events (for example, in the IRSN database) and they are only a result of non-destructive examination (this also explains why leak events were more numerous than crack events in the databases). The mechanism of crack development varies from case to case, based on the type of the plant and on the type of operation or maintenance of the equipment. In general, both mechanical and thermal fatigue were primary contributors to crack generation.

Primary-to-secondary leaks have a large impact on radiation protection because they represent a containment bypass.

"Most of the events were discovered with the plant in cold shutdown, and their effect on operation was almost negligible"

Leaks usually have a significant impact on the radiation protection of staff. For example, decontamination and cleaning operations are subject to operational radioprotection rules, and specific tools or methods are often necessary. Significant human and equipment resources are needed to clean inaccessible areas.

The safety impact of any leak depends mostly on its detectability (general or local instrumentation allows for detection of fast or slow leaks), its location (inside or outside the reactor building, proximity to pressure equipment), its route, its rate, its rate of change, its duration, whether it is isolable, and its actual and potential impact (external or collected leakage, generalised corrosion, dispersion of radioactive substances, etc).

In most cases, when cracks and non-through-wall defects, or slow leaks, are detected (during shutdowns) their safety significance is assessed in order to choose a corrective action. Repair of the damaged component is preferred, though the replacement or other design modifications may require long outages. The component repair will be monitored closely.

Identify sensitive areas
Plant-specific methods are needed to identify the areas, structures, systems and components sensitive to cracks and leaks, making systematic use of the original design, operating conditions, plant-specific and generic operating experience, and the results of R&D.
Special attention should be paid to all equipment subject to frequent manoeuvring and to human-operated equipment. Since procedures alone are a weak barrier, all the areas in the nuclear island where they are the main protection should be prioritised.

Root causes
Components made of materials that are recognised as sensitive to Stress Corrosion Cracking (SCC) should be replaced, or included in in-service inspections in order to avoid or detect cracks and avoid leaks.

To avoid chloride-induced trans-granular stress corrosion cracking (TGSCC), operators should prevent contamination of outer surfaces of components made of stainless steel with chlorides (from leaks in the RCS or other systems, or other substances containing contaminants, for example adhesive or insulation). Areas where chlorides can accumulate should be identified and considered within the framework of in-service inspections. A monitoring regime should be developed to avoid or reduce the accumulation of chlorides.

Events of coolant leakage are sometimes associated with human error. Careful attention should be paid to operations and maintenance, in particular during outages and on sensitive equipment, components and areas. Training, and post-maintenance checks and records of the maintenance performed in previous campaigns, should be consulted during each maintenance period.
The assessment showed that manufacturing deficiencies can cause degradation. One way to deal with this could be witnessing manufacturing. New insights from manufacturing should be considered to identify early areas potentially sensitive to cracking. Compliance with technical requirements in codes and standards must be enforced.

Controlling SSC degradation
The components of the RCPB should be designed, built and operated to avoid any degradation of these components, which could lead to reactor coolant leakages. To make sure that cracking does not occur suddenly, or to identify component cracking at an early stage, in-service inspection programmes should be implemented. This includes optimizing operating conditions and replacing components with improved ones, if necessary. If required, these actions should be accompanied by design changes.

Managing a leak inside the reactor containment should not be limited to the elimination of the leak but should include assessments of the leakage dose impact and the waste processing for the waste and effluents it has generated (leakage itself, clean-up activities, decontamination, and others).

Most of the recommendations arising from operating experience reveal the difficulty of performing a comprehensive assessment, including root cause evaluation, when a leak or a crack is discovered. This suggests a need to establish an integrated management process, covering all the phases in the lifetime of SSCs, including manufacturing acceptance control, installation, operation, and maintenance.