Norsk Hydro is rejuvenating and renaming its original Tyin scheme, in Norway, with a combination of new tunnels to tap different waters and refurbishing the underground powerhouse. Report by Patrick Reynolds 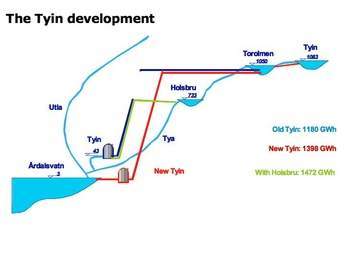 Superceded and made almost redundant by the larger New Tyin hydropower scheme, now the original Tyin facility in Sogn, Norway, is being partly brought back into service by aluminium and energy group Norsk Hydro in a project that involves new tunnel construction as well as some refurbishment of the underground powerhouse.

The project also brands the facility with a new name – Holsbru, which is that of the main reservoir it will tap given that New Tyin is draining its old waters. Holsbru is to be put into operation by mid-2012.

Holsbru is not Norsk Hydro’s only hydropower development at present. It is building the Vasstol project in Suldal, Norway, as part of a scheme to rehabilitate the Finnabuvatn rockfill embankment dam. The small hydro plant will exploit the head between reservoirs for the Roldal plant Finnabutavn and Vasstolvatn. The concession for Vasstol was awarded in 2004 and the project should be completed by the third quarter of 2012 to generate 26GWh of electricity per year.

Separately, Norsk Hydro has applied for a concession to build plants at Oyane and Ilvatn, in Sogn – the same region as Holsbru. The two plants are planned to be operational by 2014 and 2015, respectively, and generate a total of 211GWh of electricity per year.

Norsk Hydro has 17 plants and is Norway’s second largest producer of electricity from hydropower – generating 9400GWh in an average year, mostly for its own consumption but with more than a quarter for net spot sale.

The original Tyin project was constructed in the 1940s to be fed by water from the Tya River, impounded at the Torolmen and Tyin lakes some 1007m and 1040m, respectively, above the underground powerhouse. The waters were conveyed along the shallow gradient of a headrace tunnel to the steeply inclined leading into the powerhouse cavern. Tyin’s powerhouse was designed for six horizontal Pelton turbines with a total installed capacity of 192MW. The plant was commissioned in 1944 and generated an average of 1150GWh of electricity per year.

In the early 1990s, a planned upgrade of Norsk Hydro’s aluminium smelters meant increased demand on existing water resources of the Tya basin being used to generate electricity and this in turn led to a reassessment of how well the Tyin facility was utilising the hydropower potential of the catchment. It also brought further focus on issues at the plant already, such as the plant’s forged-welded penstock pipeline, which needed to be addressed to meet the new requirements from the central authority, the Norwegian Water Resources and Energy Directorate (NVE).

The subsequent review and analysis led to the decision to replace the existing facility and infrastructure with a larger plant having its own conveyance system and penstock. The existing plant would be decommissioned and lay dormant, its caverns and blocked off tunnels only a short distance through the rock from the new powerhouse and tubes, which tapped more waters at the same altitude in the catchment.

However, the new hydropower complex did not make use of water from, and around, the lower level neighbouring areas of Holsbru and Rausdalen. Norsk Hydro said it was not possible to include those waters in the New Tyin project but they could be tapped in a ‘creative approach’ to revitalise the existing plant.

Hence, while no longer in use, it was not quite the end for the original powerhouse, and over the following few years studies were undertaken to look at how the facility could be brought back into use.

The concession to construct the New Tyin project was granted in 2001 and construction quickly commenced, enabling the new plant to be commissioned and become operational in October 2004.

The project taps into almost the same water system as the original plant, but with a new intake and waterways in addition to including the top, shallow gradient part of the existing headrace. Neighbouring so closely, its axis (reservoirs to powerhouse) is only slightly different from that of the original plant.

A 11.3km long headrace tunnel was excavated with three main sections having slopes of 1:32, 1:13 and 1:6, the steepest immediately upstream of the powerhouse cavern. The cross section areas of the middle and end stretches are 30m2 and 36m2, respectively.

At the junction of the last two slopes a shaft rises up about 500m to meet, and drain, the shallow stretch of the original headrace of the old plant, and just above that juncture a new surge chamber was built. The tailrace tunnel is 2.74km long, and the infrastructure also features a 1.5km long access tunnel.

New Tyin has an underground powerhouse with two generating units operating under a net head of 1034m with maximum flow of 40m3/sec. The plant has a total installed capacity of 374MW (2 x 187MW) and generates approximately 1400GWh of electricity per year. During construction the company had kept the existing powerhouse in operation to keep supplying power to the smelter.

Return of the old

Norsk Hydro wanted to generate more hydropower from within its existing concession areas in the region and, as noted, not all the waters in the area of the New Tyin plant were tapped. The waters from, and around, the Holsbru and Rausdalen areas remain as a hydropower resource and the possibility of a project to use new feeder tunnels to tap these lakes part way up the catchment was explored.

Studies to examine the re-employment of the original Tyin powerhouse facility came to see that it would be economical to reuse the old penstock and part of the station equipment while excavating a new tunnel uphill to tap the available waters. The tunnel will rise and split into two branches that stretch towards Rausdalen creek and the Holsbru reservoir, impounded by a very small dam, and two large streams (Skanseelvi and Engesetbekken). The system will also drain flows from three smaller creeks.

In addition to the new tunnels, the facility will also include some refurbishment of the existing equipment as well as supply of some new. Norsk Hydro said that to reuse some machinery and penstock would not only reduce investment capital but also demolition cost. However, it does acknowledge that the machinery would be over-capacity, and therefore not operating at optimal efficiency, for the reduced head and flows that will be available compared to the original.

The rejuvenated original Tyin plant is being re-named Holsbru under the project, for which Norsk Hydro applied for approval through a revised concession on the New Tyin project. Norsk Hydro won the greenlight to proceed with the Holsbru project in the third quarter of 2008.

The total cost of the new hydropower resource and rehabilitation project is about NKr230M (US$39M). Norsk Hydro expects to gain an additional 84GWh of electricity per year from the Holsbru project.

The current works to create the hydropower infrastructure for the Holsbru plant include new tunnels as well as replacement and refurbished machinery in the powerhouse.

Local contractor Haehre Entreprenor is blasting the new tunnels with a total length of 5.8km planned. Excavation began in third quarter of 2010 and the works are expected to take about a year to complete. Geology is Precambrian rocks, mainly amphibolitic gneiss.

The tunnels comprise a 3.1km long headrace and two branches (or transfer, tunnels) of 1280m and 880m lengths, respectively, to collect water from the reservoir and creeks. The existing penstock will intersect with, and connect, to the new tunnels which will have cross sectional areas of 20m2.

Tunnelling works will also include two access adits of 340m total length and 25m2 sections, and other bores totalling 120m in length with 20m2 areas. There will be a total of five intake shafts along the branch tunnels, with lengths ranging from 10m-35m.

Excavation will be undertaken by drill and blast from the two adits, and advancing with four faces.

The tunnels will not be lined with cast-insitu concrete but only shotcrete at locations where extra structural support is required for the local rock.

The Holsbru project will use one of the original generating units (Pelton turbine and generator) of the Tyin powerhouse and a second unit that will be fitted with a new runner, the original generator being kept. The unit being entirely re-used will be kept in reserve for use in periods of high, or flood, flows.

The hydro-mechanical equipment for all of the other units – accounting for more than two-thirds of the original generating machinery in the underground powerhouse – is being removed.

Other equipment to be reused in the facility include: one of the three supply pipes into the powerhouse from the penstock; the water ball valve; and, most of the electrical equipment (e.g. generator cable, switches and the transformer).

The other new equipment to be installed includes: a new valve arrangement where the penstock meets the new tunnel; a cooling system; and, a circuit breaker.

This year, the existing equipment in the powerhouse will be cleaned, maintained and tested. Also this year a new station floor is to be constructed in the almost seventy year-old cavern to receive new equipment. The new turbine is to be installed in 2012 and the renewed plant re-commissioned shortly afterward.