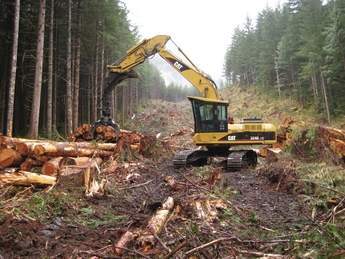 Plutonic Power was established in 2003 after CEO Donald McInnes saw a photo of a run-of-river project on the wall of Knight Piesold’s engineering office. McInnes wanted to develop a company with the vision to provide leadership and create a legacy through the development of renewable, reliable, made-in-British Columbia (BC) clean energy.

At the moment, BC relies on as much as 15% of its energy from non-renewable imports. Imports create price and resource risk and do not foster innovation and entrepreneurial spirit the way a self-sufficiency mandate does. The provincial government of BC has a very strong green energy and climate change mandate, which creates opportunities for companies like Plutonic to step up and reduce such reliance on imported energy.

BC’s Energy Plan of 2007 aims to make a 33% reduction to its GHG emissions by 2020. Furthermore, it states that all electricity generation should be zero net emissions by 2016 and that 90% of BC Energy should come from clean renewable resources. BC clean energy potential could offset 8.25 megatonnes or 41% of target set out by the government – the equivalent of removing 1.6M cars from roads. And Plutonic projects could account for half of this offset.

Plutonic’s portfolio comprises the proposed C$5-6B Green Power Corridor: a vision of a cluster of generation sites that maximise transmission infrastructure and use the best run-of-river sites available. This 40-facility project has the design capacity to generate enough energy to meet the annual needs of about 630,000 homes and create approximately 5500 person years of employment.

The Green Power Corridor includes the flagship C$660M East Toba River/Montrose Creek run-of-river project currently under construction. The 196MW project is expected to be completed by 2010.

The latest progress report from the company states that the permanent camp site has been developed and camp buildings, water and wastewater treatment plants are being installed. Roads and bridges in the Toba Valley have been remediated and restored to allow access to the permanent camp site. To date 45km of transmission line corridor have been cleared and the first power poles were installed in June. Penstock and powerhouse construction are expected to begin during the last quarter of 2008, along with the stringing of transmission lines.

GE Energy Financial Services, through a Canadian affiliate, is investing up to C$112M to acquire a 49% equity and 60% economic interest in the project, and has provided Plutonic with a C$30M credit facility to fund the company’s direct costs for increasing the capacity of a 230kV transmission line to be built for the project. In return, Plutonic has issued to the GE affiliate 650,000 two-year common share purchase warrants, each of which may be exercised to buy one common share of Plutonic for C$9.03. Additionally, the GE affiliate has provided the Toba Montrose General Partnership a C$100M three-year credit facility. It has agreed to repay this credit facility with the proceeds of its equity investment once commercial operations begin. The GE affiliate will also establish a C$28M credit facility as an additional standby contingency facility as required by debt providers and will replace the C$11.7M performance bond previously issued to BC Hydro by Plutonic.

Another Canadian affiliate of GE Energy Financial Services, together with Manulife Financial (TSX, NYSE: MFC), is arranging a C$470M, 38-year senior, secured construction and term credit facility. Upon closing of the senior debt facility and replacement of the performance bond, Plutonic will recover approximately C$39M for expenditures funded to date.

IBAs with three First Nations partners all vary in their content and conditions. They took five years to finalise while many hours were spent on developing relationships that led to the partnerships the company now has. Specifics of the agreements are confidential but all include:

• Ongoing respect by Plutonic Power and its affiliated companies for asserted rights and title of the Sechelt First Nation in the area where the transmission line and substation will be located in Traditional Territory.

• Annual payments for the life of the project.

• Employment and training opportunities for First Nations-owned companies in the clearing and construction.

• A framework for partnerships on future development opportunities/projects

Other projects along the Green Power Corridor include the Upper Toba and Bute Inlet schemes which are both at the design stage. Detailed engineering designs to confirm project feasibility are being carried out for the two schemes, and cost estimates and construction schedules are being prepared.

Potential major equipment suppliers are being engaged as part of the team to develop the owner’s requirements, and optimise project layouts, schedule and cost. Suppliers include Andritz VA Tech Hydro and ABB Inc.

The Upper Toba project comprises three facilities with capacity ranges from 30-56MW, totalling approximately 130MW. All plants will tie in to the Toba-Montrose 230kV transmission line, which is currently being constructed (Toba-Montrose line was sized to accommodate these future projects).

Project permitting is expected to be completed by the end of 2008 with construction getting under way in 2009, depending on utility BC Hydro’s call schedule.

The facilities are currently scheduled to be commissioned and placed in commercial operation in stages over 2010-2011.

Located on tributary streams in three river valleys at the head of the Bute Inlet, this project comprises 18 facilities. Their capacity ranges from 20-130MW, totalling more than 900MW.

Significant common infrastructure development will be required for these facilities, including over 200km of access roads, barge facilities, construction camps and long-term operation and maintenance facilities.

Project permitting should be finished in 2010 with construction starting in 2011. The company expects phased in-service dates, potentially starting as soon as 2014, depending on the final agreements with BC Hydro.

Bute will require a new transmission line to deliver power to the point of interconnection with the BCTC grid. Options for the POI are being evaluated, and Plutonic is carrying out preliminary engineering and pricing for two potential routes, ranging in length from 150km to over 200km. Depending on the final generation build, the transmission line could be built at 230kV, 360kV or 500kV. Both routes include challenging sections of high alpine passes.

Plutonic has been working closely with Knight Piesold in the development of the green Power Corridor, and praises its working relationship adding that Knight Piesold has extensive experience when it comes to researching and siting economically viable and efficient run-of-river sites. ‘That expertise has played a significant role in our success to date,’ a spokesperson for Plutonic says. ‘Mutually we agreed that the relationship needed to be preserved to ensure the benefits of working together continue. While we currently have 40 sites, we fully expect Knight Piesold may find other exceptional sites in the area.’

In May 2008, Plutonic and Knight Piesold agreed to extend this relationship until 2014. The agreement also provides Plutonic with a right of first refusal to acquire new projects identified by Knight Piesold and also includes a standard non-compete clause to ensure continued interactions between the two companies are free from conflict. The agreement provides for the issuance of 100,000 common share purchase warrants to Knight Piesold, exercisable at C$7.93 per share for a period of two years, plus a bonus structure if any of the identified projects become commercially viable. Knight Piesold will also be entitled to payment of its fees for services provided.

‘Knight Piesold is pleased to agree to the extension of the relationship with Plutonic Power,’ says Knight Piesold president Jeremy Halle. ‘We plan to continue to work diligently on identifying renewable energy project sites with exceptional potential and working towards positioning Plutonic as a leader in the development of clean energy in BC.’

Ideally, by 2018 Plutonic aims to have successfully permitted and have all of the 40 sites along the Green Power Corridor in full operation.