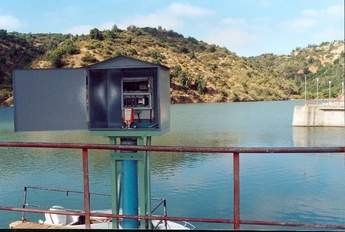 Embalse Rapel dam, which was built in 1968 at the confluence of the Cachapoal and Tinguiririca rivers in Central Chile, has created the largest artificial lake in Chile with a capacity of 700Mm3. The reinforced concrete dam wall measures 112m high by 350m wide and the spillway has five sluice gates with a flow capacity of 10000m3/sec, feeding the five 75.4MW Hitachi vertical shaft generators. The combined output capacity of 377MW equates to an average annual generation of 1400GWh,

The hydroelectric plant at Lake Rapel is now owned and operated by Endesa (Empresa Nacional de Electricidad S.A.) Chile, an electricity generating company subsidiary of Enersis. Enersis also has a strong presence in Argentina, Brazil, Colombia and Peru, operating 46 electricity plants with an installed capacity of over 12,000MW.

Endesa Chile is the country’s principal generating company and one of the largest companies in the country, with a total capacity of 4476.7MW representing close to 38% of the country’s installed capacity. It has a total of 20 installations, most of them on the Central Grid (SIC) and others on the Northern Grid (SING), the main electricity systems in Chile.

The measurement and control of the water level in Lake Rapel is critical to the optimum running of the turbines. The level is required to be measured over a 9m range with a precision of ±5mm. The existing original float measuring system had traditionally struggled to achieve this demanding resolution and also required a high level of maintenance. However any replacement instrument faced a number of challenges, including having to work inside the existing 100mm diameter stilling well. Although the obvious choice appeared to be a submersible pressure transmitter this was rejected due to potential drift problems and recalibration requirements.

Having surveyed the limited options open to them, Endesa engineers turned to the Hycontrol solution, based on the company’s VF Series Guided Wave Radar transmitter which works on the principle of Time Domain Reflectometry (TDR). This technology is ideal for such applications, offering exceptional long-term accuracy of better than 3mm over the unit’s full measuring capabilities of 35m, says Hycontrol.

TDR was originally developed to detect and locate faults in cables and is particularly useful in applications involving long underground cable runs. In a TDR-based level measurement device, a low-energy electromagnetic impulse generated by the sensor’s circuitry is propagated along a thin wave guide (also referred to as a probe) – usually a metal rod or a steel cable. When this impulse hits the surface of the medium to be measured, part of the impulse energy is reflected back up the probe to the circuitry which then calculates the fluid level from the time difference between the impulse sent and the impulse reflected (in nanoseconds).

The Hycontrol TDR unit is supplied pre-calibrated and has a very small measuring footprint, allowing it to work in stilling wells as narrow as 50mm diameter.

For this application Hycontrol installed a TDR on top of the stilling well with a 13m long, 8mm diameter 316 stainless steel cable and counter weight. A plastic spider was fixed just above the counterweight to prevent any part of the assembly making contact with the wall of the stilling tube. The pre-calibration status meant that once installed, the TDR unit was commissioned in a matter of minutes. The unit sends data back to the PLC, 200m away in the control room, providing Endesa with accurate level control
information.

The unit has now been working faultlessly for over four years without any reliability or drift related problems.