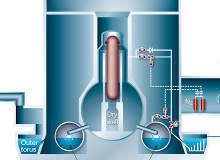 In case of very unlikely initiators, such as large earthquakes which could lead to an extended station black out, missing emergency core cooling could lead to core damage where large quantities of radioactive materials are released to the containment. The zirconium-water reaction, as well as concrete-water reaction at high temperature, leads to the formation of large quantities of ignitable gases. If these gases cannot be inertized or removed from the containment, the integrity of the containment could be lost and releases of radioactive materials would be inevitable. Such a situation would pose serious consequences to the environment. The filtered pressure relief in such event sequences can prevent a failure of the containment and cause a significant reduction of the radioactive release.

Preventing an uncontrolled pressure build-up and removing ignitable gases at an early point of time will protect the containment and avoid an early release of large amounts of radioactive aerosols and gases. With a filtered containment venting system the radioactive aerosols and gases are filtered with high retention factors. The first Swiss safety authority requirements guideline for containment venting systems (HSK-AN-2026) was issued in 1988 as a draft document; the final guideline (HSK-R-40) was issued in 1993. The regulations were written within a wider context of guidance on severe accident management guidelines (Figure 1).

These standards set requirements for containment venting system performance. Their nominal pressure relief capacity corresponds to 0.8% of thermal power, and maximum relief capacity corresponds to 1%. The required retention factor for aerosols is greater than or equal to 1000 (99.9%) to prevent long-term contamination by caesium; the retention factor for iodine is greater than or equal to 100 (99%). (In reality, both retention factors are about an order of magnitude higher). Containment venting systems’ design pressure depends on whether containment has been inerted by nitrogen or equipped with, for example, hydrogen recombiners, to reduce the risk of explosion. For non-inerted containments of PWRs and BWRs, venting systems have a maximum pressure equal to design pressure, and/or equal to half of failure pressure (which is set at a level greater than twice design pressure for Swiss nuclear power plants). For an inerted BWR containment, maximum venting pressure is 1.5 times design pressure and/or 0.66 times failure pressure.

The system must also operate to other regulatory requirements, including availability during station blackout, passive depressurisation (via a rupture disc), seismic qualification to class 1 (the highest requirements), and the generation of a maximum personnel dose of 100 mSv during the year after the accident release.

In the early 1990s, when the venting regulations came into force, each station installed a different venting system. Most consist of pipework that connects containment to some sort of filtration vessel, which then exhausts to a reactor exhaust stack or via another vent pipe. Valves can be adjusted from an adjacent control room that is shielded from potential radiation.

The Beznau containment filtered venting system consists of a single vessel housed in a building that shares a wall with containment. The gases travel from the reactor building to the filtration vessel, and once treated, they are released through a stack alongside the reactor building. The control room is located in the building, adjacent to the filtration vessel.

The Leibstadt system consists of twin vessels, again just outside the containment wall. The tanks were installed outside, although they are in a sheltered location between containment and another building. The valve control room is indoors, adjacent to the tanks.

The Goesgen system resides inside the spherical reactor building, although outside primary containment, and the vessel helps retain radionuclides by percolating gas through a fluid (Figure 2&3). The scrubber consists essentially of the venturi scrubber, and the metal fibre filter (pre-filter and fine filter; total surface area 6.7 m2). Serving as washing liquid, demineralized water is conditioned with 0.5% sodium hydroxide (NaOH) and 0.6% sodium thiosulfate (Na2S2O3). The aim of the chemical conditioning is a transfer of the volatile elemental iodine (I2) in a non-volatile compound form. The wash liquid reservoir of the venturi scrubber is so dimensioned (15 m3) that during an operating period of 24 hours no feeding is required.

Components of the Muehleberg containment filtered venting system are dispersed in the Mark 1 reactor building and in an adjacent bunkered emergency building (Figure 4). To actuate the system, normally-closed spring-loaded valves can be actuated either through the control panel or by direct access to the nitrogen-driven pneumatic system; the flow-control valve can be actuated either by the control panel, or manually from inside or outside the reactor building. The pneumatic valves and the rupture disc are located in the reactor building. A system that injects a sodium carbonate/bicarbonate and sodium thiosulfate mixture feeds by gravity into the outer torus, where a multi-venturi scrubber system has been installed.

Since the explosions at Fukushima in March 2011, which were due partly to late or nonexistent containment venting, the Swiss safety authority (ENSI) has carried out in-depth inspections of the containment filtered venting systems at every plant.

ENSI identified several problems in the containment venting at Fukushima:

ENSI concluded that Swiss containment filtered venting systems meet its design requirements, would continue to operate safely under manual control even during a station blackout, and that lines of access are available even in difficult conditions.

Patrick Miazza, BKW Energy Ltd, Switzerland. This article is based on a presentation at the USNRC’s RIC 2012, the 24th annual regulatory information conference, 13-15 March 2012, Bethesda, Maryland.