Nine Dynapac CA250 vibratory roller compactors have been delivered to Malaysian contractor Gamuda Bhd at the site of the Nam Theun 1 hydro power project in Laos, where they will be used for construction of the 177m high RCC dam and for building and maintaining the access roads. 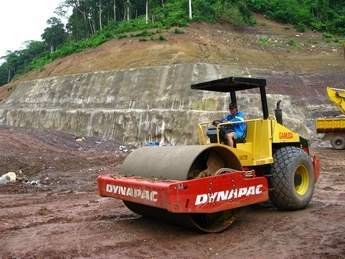 The Nam Theun 1 project is located on the Nam Kading River, approximately 33km upstream of its confluence with the Mekong River in Borikhamxai Province, central Laos.

Gamuda and Electricity Generating plc (Egco), Thailand’s second biggest private power producer, have the US$700M concession to undertake and operate the project. Each has a 40% stake, and the Laotian government holds the remaining 20%.

Gamuda is developing Nam Theun 1 as a build-operate-transfer project under the auspices of an inter-government agreement for Thailand to purchase 3300MW of power from Laos, bringing development and revenue to Laos while providing Thailand and Laos with clean, renewable electric power.

Along with the dam, the project includes an intake and power water tunnel, a switchyard, an operator village, and a generating plant with a total capacity of 531MW.

A 180km long 500kV power transmission, from the Nam Theun 1 switchyard to the Laos-Thai border via the Nabong Substation, passes through forested areas and agricultural areas of rice fields and vegetable farms. It will then enter the grid of the Electricity Generating Authority of Thailand.

Gamuda has established a base office in the Laos capital of Vientiane, and has recently finished the construction of a camp for workers and engineers at the site. Preparation work began on site last year. Because of the heavy rains in the mountains of central Laos, work has, as planned, been slowed down during the rainy season, which began in May and will continue through to late September.

The CA250 has been designed for compaction duties in most types of soil and is ideally suited for road building and dam applications. Featuring a maximum operating weight of 13,300kg, the CA250 has a 2,130mm wide drum to ensure a compaction static linear load of 28.2kg / cm with a 246 kN high amplitude centrifugal force and 119 kN a low amplitude.

Rock for the gravity dam is being excavated from a new quarry 1km from the dam itself, where it will be transferred to the adjacent crushers and cement mix plant, and then trucked to the dam crest.

Approximately 3.4Mm3 of concrete placement will be required by the dam, and one of the reasons Gamuda standardised on the CA250 was that the contractor will be better able to monitor and forecast production rates as the job progresses.

Once work begins at the end of the rainy season, some of the Dynapacs will also be used to maintain the access roads. An 8km access road leads from the main highway into the mountains, and is currently being cut through the shoulder of the mountain at the dam location.

A 1km road is being cut from the dam location through to the quarry site, and there is another road being cut down to the location of the powerhouse at the toe of the dam.

The main task of the Dynapac compactors will be to maintain the road surface, compacting the mixed laterite, clay and silt that forms the soil in this region.

Nam Theun 1 is being built downstream from the Nam Theun 2 and Theun-Hinboun hydro power projects, and is another element in the plans of land-locked Laos to turn itself into a source of exportable electric power by developing its huge hydroelectric potential.