The acceleration of renewables expansion worldwide has surprised even the most optimistic observers. And the undisputed leader of this expansion, in terms of production capacity and market size, is China. 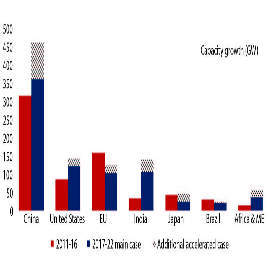 China is the world’s largest market for both photovoltaics and solar thermal energy and since 2013 it has been the world’s leading installer of solar PV. There are now more than 400 Chinese companies involved in manufacturing and installation. In 2015, China became the world’s largest producer of PV power, and by the end of 2016, total PV capacity had increased to over 77.4 GW. Solar water heating is also extensively implemented, with a total installed capacity of 290 GWt at the end of 2014, representing about 70% of world’s total installed solar thermal capacity.

China’s importance now in the global renewables market and its impact on the future of renewables is hard to overestimate, as the International Energy Agency’s Renewables 2017 report demonstrated.

The IEA reports that worldwide new solar PV capacity grew by 50% last year, with China accounting for almost half of the global expansion, according to the International Energy Agency’s latest renewables market analysis and forecast. For the first time, solar PV additions rose faster than any other fuel, exceeding the net growth in coal.

Boosted by a strong solar PV market, renewables accounted for almost two-thirds of net new power capacity around the world last year, with almost 165 gigawatts (GW) coming online, according to Renewables 2017. Renewables will continue to show a strong growth in coming years. By 2022, renewable electricity capacity should increase by 43%.

“We see renewables growing by about 1000 GW by 2022, which equals about half of the current global capacity in coal power, which took 80 years to build,” said Dr Fatih Birol, the executive director of the IEA. “What we are witnessing is the birth of a new era in solar PV. We expect that solar PV capacity growth will be higher than any other renewable technology through 2022.”

Dominance in demand and manufacture

Today, China represents half of global solar PV demand, while Chinese companies account for around 60% of total annual solar cell manufacturing capacity globally. This being so, market and policy developments in China will have global implications for solar PV demand, supply, and prices. In the Renewables 2017 main case forecast, total solar PV capacity around the world will reach 740 GW by 2022.

If uncertainties and barriers are addressed, solar PV growth could accelerate even more. But two important challenges in China – the growing cost of renewable subsidies and grid integration – limit growth in the main case forecast. China’s renewable energy policies are being modified quite substantially in order to address these challenges. China is moving away from its feed-in-tariff (FIT) programme to a quota system with green certificates. Together with ambitious power market reform, new transmission lines, and the expansion of distributed generation, these new policies are expected to speed up deployment of solar (and wind). However, the timing and implementation of this policy transition remain uncertain.

Three countries will account for two thirds of global renewable expansion to 2022, China, the USA and India. China is the undisputed renewable growth leader, responsible for over 40% of global renewable capacity growth, largely driven by concerns about air pollution and capacity targets that were outlined in the country’s13thfive-yearplanto2020.Infact, China has already exceeded its 2020 solar PV target, and the IEA expects it to exceed its wind target in 2019. China is also the world market leader in hydropower, bioenergy for electricity and heat, and electric vehicles.

In terms of sources, bioenergy will lead renewable heat consumption growth over the outlook period, followed by renewable electricity for heat. Global solar thermal energy consumption is also expected to increase by over a third, although growth is forecast to be slower than in previous years.

China alone provides over a third of overall renewable heat growth in the outlook period, driven by strengthened targets for solar thermal, bioenergy and geothermal as well as by increasing concerns over air pollution in cities.

The global trend in electric vehicles is mostly driven by the rapid growth of two- and three-wheelers in China but also results from electric cars in those European markets with high shares of renewable generation. The USA represents over one- fifth of global electricity consumption in cars, but the estimated consumption of renewable electricity is expected to be smaller than in China and Europe as a result of the lower share of renewables in the electricity mix.