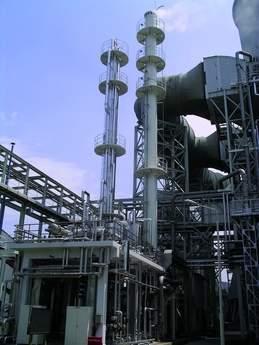 July saw the first capture of carbon dioxide – albeit at pilot scale – from power stations in China and Australia, marking important milestones for post combustion capture programmes being run by CSIRO (the Australian Commonwealth Scientific and Industrial Research Organisation).

Just weeks ahead of the Olympics, the CSIRO and its Chinese partners, Huaneng Group and the Thermal Power Research Institute (TPRI), put into operation a post combustion pilot plant at the Huaneng Beijing cogeneration plant. This is designed to capture 3000 t/y of carbon dioxide using amine scrubbing.

CSIRO says the project “begins the process of applying the technology to Chinese conditions and evaluating its effectiveness.”

“It will allow post combustion capture technology to be progressed in the Chinese energy sector which will have a much greater impact than operating in Australia alone,” said CSIRO Energy Technology Chief, Dr David Brockway.

The Beijing installation is a CSIRO “Energy Transformed” flagship research project which receives funding from the Australian government through the Asia Pacific Partnership on Clean Development and Climate initiative (APP). The APP programme on post combustion capture also includes a pilot plant installation at Delta Electricity’s Munmorah power station on the NSW Central Coast, with an additional Queensland site currently under negotiation.

The Australian government’s APP support to post combustion capture research amounts to A$12 million, of which A$4 million supports the work in China.

During a recent visit there, Prime Minister Kevin Rudd said that China was the largest consumer of coal in the world and Australia the largest exporter. As such, they “should work together develop low emissions coal technologies.”

Closer to home, CSIRO’s pilot amine scrubbing post combustion capture test rig at the Loy Yang brown coal power station in Victoria’s Latrobe Valley has gone into operation – the first time carbon capture has been done at an Australian power plant, and also thought to be a first for the Southern Hemisphere.

CSIRO’s Dr Brockway noted that the milestone followed the Garnaut Report’s recognition that Australia has an important role to play in developing low emission coal technologies. “Coal is the primary fuel for over 80% of Australia’s current power supply – it’s what turns the lights on in most homes – so we need to find ways to make it a cleaner energy source,” he said.

The 10.5 m high pilot plant at Loy Yang is designed to capture up to 1000 t/y of CO2. Trials will involve the use of a range of different CO2-capture liquids.

The project is part of the Latrobe Valley Post Combustion Capture Project – a joint collaboration between Loy Yang Power, International Power Hazelwood, government, CSIRO (under its Energy Transformed Flagship programme) and CO2CRC (including Monash and Melbourne Universities). The Loy Yang component of the project is supported by the Victorian government to the tune of A$2.5 million through its Energy Technology Innovation Strategy.

Stage One envisages construction of an 80 MWe (net) coal gasification plant near Rockhampton in Central Queensland. Carbon dioxide would be captured at site and transported about 220 km for injection and safe storage in deep underground reservoirs in the Northern Denison Trough.

Compared with the original project configuration, Stage One will involve a more efficient plant with a bigger power output using a 6F turbine. The plant will capture up to 75% of carbon dioxide emissions and transport them via truck for sequestration.

Stage Two of the project will be developed concurrently with Stage One and will consist of the deployment of a 300 MWe (net) coal gasification plant with carbon capture and storage. A pre-feasibility study will investigate suitable areas in Queensland for the location of the project.

ZeroGen Pty Ltd chairman, Elizabeth Nosworthy, says the new two-staged configuration of the project is aimed at “de-risking” the technologies whilst simultaneously accelerating their large-scale development.

“ZeroGen Mark II is a two-pronged ‘learning by doing’ approach that will deliver coal-based low emission power at a large-scale faster and with less risk than previously thought possible,” she believes.

While the costs of the original ZeroGen project were met by the Queensland government, the Australian Coal Association, through the COAL21 Fund, is providing A$26 million to cover additional costs entailed in the revised feasibility study for Stage One. The Queensland government and ZeroGen are also be seeking Commonwealth government funding for the feasibility studies for Stage One and Two.

A decision on Stage One construction will be taken in 2009 following completion of the Stage One feasibility study.

The reconfigured project has received the support of WWF-Australia.