Chernobyl unit 4: Novarka and EBRD have got it covered

A ceremony held on 29 November marked a key milestone in efforts to decommission Chernobyl unit 4, destroyed in the 1986 accident, with the sliding into place of a giant arch structure called the New Safe Confinement (NSC) The NSC has been constructed by Novarka, a consortium of the French construction firms Vinci and Bouygues, with major funding via the EBRD (European Bank for Reconstruction and Development). James Varley reports 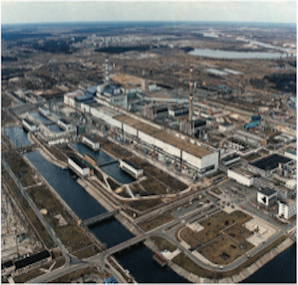 The purpose of the New Safe Confinement – width 257 m, length 162 m, height 108 m, and weighing over 36 000 t equipped – thought to be largest moveable land based structure ever constructed, is threefold:

The NSC, to be finally handed over to Chernobyl Nuclear Power Plant (ChNPP) – the state owned entity responsible for decommissioning and site remediation – in November 2017, has been fitted with equipment, notably a very large remotely controlled overhead robotic crane system, to allow work to eventually begin on decommissioning proper of unit 4, while keeping human intervention to the strict minimum. The equipment in the NSC will be connected to a new building that will serve as a control room for future operations inside the arch and over the coming months the NSC will be hermetically sealed off from the environment.

In terms of the daunting task of unit 4 decommissioning overall, NSC completion can perhaps be seen as the end of the beginning.

To minimise radiation levels during construction of the NSC it was built some distance away from unit 4, in a decontaminated area on the western side of the destroyed power plant, and then moved over a distance of 327 m from its assembly point to its final position, completely enclosing unit 4 and its sarcophagus. Hydraulic jacks were used to push the arch, 60 cm per stroke, into position – an innovative concept devised and implemented by Dutch crane company Mammoet.

The sliding (or “skidding” to use Mammoet’s preferred term) system, specially designed for the Chernobyl 4 project, is fully remote-controlled and consisted of 116 “skid shoes” with an average capacity of 700 tons each. The skid shoes were completely synchronised on both sides of the structure to ensure a smooth and even operation. The system pushed the structure along concrete tracks installed at a 33 degree angle to optimise load transfer onto the foundations.

The assembly of the New Safe Confinement arch started in 2012 after extensive preparatory works on the ground. Because of its vast dimensions the structure had to be built in two halves, which were lifted (also using Mammoet jack-up equipment) and joined together in 2015.

The project is being managed by a joint team of people from Bechtel and from ChNPP. Other contractors include PaR of the USA (robotic main crane system), Okyanus of Turkey (corrosion resistant lightweight steel wall cladding), CNIM of France (polyurethane membrane to provide flexible but leaktight seal between new structure and existing buildings) and Cimolai of Italy (arch structural steel components).

At a cost of €1.5 billion the NSC is the single biggest element of what is called the Shelter Implementation Plan (SIP), a blueprint developed by Western countries and the Ukraine, and funded by the European Commission and the USA, for addressing Chernobyl problems systematically, which identified over 300 “sub tasks” required to support construction of the NSC. The €2.1 billion Shelter Implementation Plan programme is financed by the Chernobyl Shelter Fund. Established in 1997, the Fund has received more than € 1.5 billion from 45 donors to date. The EBRD manages the Fund and is the largest contributor to the New Safe Confinement project.

Most of the 300 sub tasks have been completed, and included creating the necessary infrastructure at the site, which required building of road and rail connections as well as the refurbishment of power, water, drains and communications, and provision of a new changing facility for workers, medical and radiation protection facilities and ambulances.

In addition the SIP programme of work included stabilisation, over the period 2004- 2008, of the roof and western wall of the existing hastily built original shelter, with 80% of the roof load transferred to a new external support structure, while inside the shelter, extremely challenging tasks were carried out, such as the installation of new structural supports in the de-aerator stack, reducing the risk of collapse.

Further measures included implementation of a radiological protection strategy and risk analysis, with the probability of criticality incidents examined (and thankfully found to be negligible), and installation of an integrated monitoring system.

Among other decommissioning related projects at the Chernobyl site being funded by EBRD are the huge € 380 million ISF-2 facility (being supplied by Holtec) to store spent fuel from units 1-3 – which, amazingly, continued to operate following the accident at unit 4 – and a liquid-waste treatment facility.