Before nuclear facilities are dismantled, and contaminated sites remediated, their initial radiological state must be characterized. Combining historical information, non-destructive measurements and lab analysis results, the statistical method of geostatistics allows all available data for 2D or 3D contamination mapping to be integrated and enhanced, and helps quantify estimation uncertainties. By Yvon Desnoyers and Didier Dubot 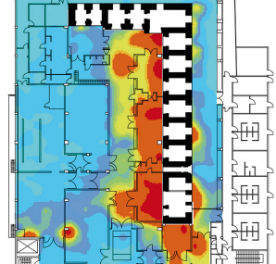 Dismantling and decommissioning of nuclear facilities or remediation of contaminated sites are industrial projects with huge challenges. Precise knowledge of the contamination state is required. Radiological evaluations have multiple objectives to be considered: determination of average activity levels, to allow the categorization of surfaces or volumes (sorted into different radioactive waste categories); location of hot spots (small areas with significant activity levels); and estimation of the source term (total activity) contained in soils or building structures. In addition there are radiation protection and other logistics considerations.

Estimates are essential for the proper management of these projects. Currently, characterization remains relatively empirical. Accumulated approximations often have serious consequences that threaten the project’s successful completion, for example through over-categorisation or unexpected contamination.

The characterization phase should be efficient and the sampling strategy has to be rational. However, investigations also represent capital expenditure; the cost of radiation protection constraints and laboratory analysis can be thousands of Euros, depending on the radionuclide. Therefore the entire sampling strategy should be optimized to reduce useless samples and unnecessary measures [1].

The geostatistical approach, which provides consistent estimates and reliable maps, is an appropriate solution for data analysis.

Geostatistics aims to describe structured phenomena in space, possibly in time, and to quantify global or local estimation uncertainties. Estimates are calculated from a partial sampling and result in different representations of the contamination, including interpolation mapping (by an algorithm called ‘kriging’). But the added value of geostatistics goes beyond this. Its benefit is its ability to quantify estimation uncertainty and provide risk analysis for decision making.

"Applied to radioactive contamination, geostatistics is novel. However, it has been used for more than 50 years by the mining industry "

Applied to radioactive contamination, this data analysis and data processing framework is novel. However, it has been used for more than 50 years by the mining industry for resource assessment, the oil and gas sector for reservoir characterization and in recent decades for environmental issues such as hydrogeology, air quality monitoring, conventional pollutants (heavy metals, hydrocarbons, soil science, and so on. It is now increasingly used to characterize radioactive contamination in nuclear facilities, sites and soils.

Geostatistics assumes spatial continuity for radioactive contamination [2]. Variability behaviour over distance between data points is the spatial signature of the phenomenon being studied. This spatial structure is analysed and interpreted through the variogram, which plots the variation between pairs of points. Typically for a structured phenomenon, this variability increases gradually and stabilizes at a certain sill for a characteristic distance called ‘range’.

The variogram, which is based on data, allows the interpretation and modelling of the spatial continuity of the phenomenon. This spatial structure is crucial for the overall geostatistical approach.

With input data and the spatial structure identified through the variogram, geostatistical techniques estimate the studied variable by a method similar to regression analysis called kriging (best linear unbiased estimator). This always includes a quantification of the associated uncertainty.

More advanced and sophisticated geostatistical methods, such as conditional expectation or geostatistical simulations, can be used to quantify different uncertainties — risk of exceeding the threshold, for instance. These estimates are powerful decision-making aids when classifying surfaces and volumes before decontamination starts (based on different thresholds as well as considering the remediation support impact).

Finally, multivariate geostatistics allows different kinds of information to be combined to improve estimates, using the spatial correlations between variables. Physical and historical data and non-destructive measurement results (for example dose rate or in situ gamma spectrometry) are integrated to improve understanding and prediction of the main variable (results of laboratory analysis, for example) while reducing the estimation uncertainty.

To use geostatistics, datasets must be consistent for correct data processing: the same sampling protocol must be used, measurement or analysis must be performed in a short period if the decay rate is sensitive; data of the same type must be expressed in the same unit, and so on. This may seem obvious, but a lot of time can be lost in correcting errors and ensuring that the data are really consistent.

Non-destructive assays or destructive samples must be associated with a physical attribute. For example, materials collected with samples may represent a few grammes or a few kilogrammes; they can be collected at a single location or over a large area.

This is referred to as the ‘support effect’ and it has a direct impact on the spatial structure identified in the variogram. Figure 2 illustrates this regularizing influence with a phenomenon that is similar to the intermediate case in Figure 1. Three cases are shown: 1×1 pixel, 3×3 pixels and 5×5 pixels. First, the overall variability (statistical variance, shown as dotted horizontal line) decreases. In addition, with the increasing size of the support effect, the variogram behaviour’s slope decreases. These differences are not related to the phenomenon itself, but stem from the measuring conditions.

With the pure random case (top in Figure 1), the support effect is most important, while it is almost negligible in the continuous case (bottom in Figure 1).

The way the data is sampled (whether the measured surface or the sample size) therefore affects collected values. The phenomenon’s spatial structure should influence the measurement or sampling technique selection.

In the geostatistical framework three sequential phases are used to characterize radioactive contamination:

Each step can be repeated, to reach acceptable levels of confidence or precision. With radiation mapping, prior information about spatial structures of radioactive contamination is used to determine the initial sampling mesh, and adding extra data points is a good way to reduce estimation uncertainty. This is quickly obtained by analysing early mapping results. For geometric uncertainties, the kriging error variance easily identifies areas with a lower sampling density. For high-variability areas, the confidence interval around the estimated value is used to detect, for instance, the boundaries of contaminated areas. For probability results, the risk of exceeding a given threshold allows surfaces or volumes to be categorized in order to optimize radioactive waste management.

Figure 3 illustrates the use of a probability of exceeding a threshold to identify an area misclassification risk [5]. This nuclear facility surface area is 800 m2. Surface contamination measurements were made using a regular grid with a 66 cm mesh. Fifty sampling points were used to collect samples for laboratory analysis. Here, the risk under study is the false negative, in which an area is declared to be below the threshold using estimate results, but in reality exceeds the threshold. Additional sample points can be intelligently allocated. Depending on the threshold, acceptable risks may vary and identified areas will change.

Examples: Use of geostatistics for radiological characterization

Geostatistics can be applied to a range of radiological characterization. The only limitation is the quality of the input data, since they are fundamental to describing spatial structure of the phenomenon. Geostatistics maps can cover very small areas (a few m2 or a few m3) or very large sites (at a country scale).

For an area of about 400 m2 and to a depth of 10m, 20 drill holes were made to take samples every 30 cm or 50 cm at a former army fort [3]. Characterizing this in-depth contamination gives a better understanding of its extent, and integrating it with the ancient topography, allows radioactive waste production to be optimised.

In a nuclear facility under decommissioning (Figure 4), dose rate measurements were collected according to a regular grid (1.5 m mesh) over a total area of 1500 m2 on two levels [4]. Assessing the structures and identifying contaminated areas helped determine sample locations to characterize concrete contamination.

On the basis of about 2000 dose rate measurements within a radius of 150 km around the Fukushima Daiichi nuclear power plant, mainly in the closest 80 km, a post-accident mapping exercise identified under-investigated areas in relation to population exposure limits. Integrating the topography also helped interpret the atmospheric dispersion and deposition of radioactive dust on the ground (see here).

Why use geostatistics for nuclear decommissioning projects?

The objective of radiological characterization is to find a suitable balance between gathering data (constrained by cost, deadlines, accessibility or radiation) and managing the issues (waste volumes, levels of activity or exposure). It is necessary to have enough information to have confidence in the results without multiplying useless data.

Geostatistical data processing considers all available pieces of information: historical data, non-destructive measurements and laboratory analyses of samples. The spatial structure modeling is then used to produce maps and to estimate the extent of radioactive contamination (surface and depth). Quantifications of local and global uncertainties are powerful decision-making tools for better management of remediation projects at contaminated sites, and for decontamination and dismantling projects at nuclear facilities. They can be used to identify hot spots, estimate contamination of surfaces and volumes, classify radioactive waste according to thresholds, estimate source terms, and so on.