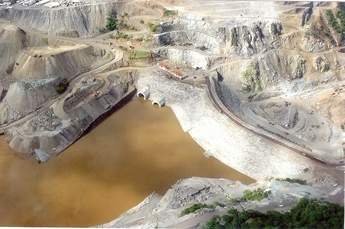 Construction of the Manuel Piar hydroelectric project in Venezuela has taken a major step forward with completion of the second diversion of the Caroni River in April 2011. The initial stage of the diversion was completed in February by the consortium building the facility, which includes Odebrecht Venezuela, Impregilo and Vinccler. This work included partial removal of Ataguía and flooding of the chamber upstream from the project’s spillways.

At the time of going to press it was reported that the project was 57% complete, with work being carried out 24 hours a day, 365 days a year.

Manuel Piar is being developed by the state-owned utility CVG-Electrificacio del Caroni (Edelca). Initial river diversion took place in 2002. The main components of the project include a 65m high and 360m long CFRD dam, with a reservoir capacity of 1770×106m3.

The project is the last scheme to be developed in the Bajo Caroni hydro power complex on the lower Caroni river watershed in Venezuela. Three dams (Guri, Carauachi and Macagua) are already in operation. The project was originally called Tocoma but its name was changed by a presidential order in April 2006.

Edelca signed a contract with IMPSA Hydro in January 2008 for the turnkey supply of the electromechanical equipment for project. The 2160MW plant will be equipped with 10 Kaplan generating units.

The project – which is being developed by Mexico’s Comision Federal de Electricidad – is to become part of the hydraulic power system on the Río Grande de Santiago river in Jalisco and Nayarit states, which also includes the completed 975MW Aguamilpa and 750MW El Cajon projects.

Activities now being carried out at site involve installation of handling equipment and embedded parts. The manufacture of hydraulic turbines and hydrogenerators has been completed in full. Commissioning of the project’s first and second hydraulic units is scheduled for January and April 2012 respectively.

The Porce III hydroelectric project is located on the Porce River in Antioquia City in Los Andes region, in the north of Colombia. The project was successfully inaugurated in January 2011, increasing the country’s installed generating capacity by 5%.

Main characteristics of the project’s dam are as follows:

The Bakun Hydroelectric Project is the largest hydropower project in Malaysia with an installed capacity of 2400MW. Located on the Baliu river in Sarawak, the project features a 207m high dam with a reservoir surface area of nearly 70,000 hectares, and a crest length of 748m, making it currently the second highest CFRD in the world.

The project – being developed by Sarawak Hidro Sdn Bhd, a wholly-owned subsidiary of the Minister of Finance Incorporated Malaysia – is scheduled for completion at the end of this year. Main civil works on the scheme began in 2002, following formation of the Malaysia-China Hydro Joint Venture.

As well as the dam, the project features a spillway with four radial gates, 15m wide by 20m high, each with a 50m wide concrete chute, 680m in length that ends in a flip bucket.

Eight power tunnels are concrete or steel lined with an intake diameter of 8.5m, a descending diameter of 7m and a varying length of 670-760m. The powerhouse is located at the base of the dam and houses 8x300MW turbines.

In August 2003, rock blasting operations began to excavate an anticipated volume of 26Mm3 of material to build the dam with a design volume of 15.Mm3 of graded rock fill. However, due to geological conditions, it was increased to 43Mm3 of excavation to produce approximately 17Mm3 of graded rockfill material for the construction of the dam.

The first rock fill works for Bakun dam began in 2004. Graded rock materials from the rock blasting operations were used for the main rock fill construction of the dam.

Impoundment of the dam began on 13 October 2010, and according to Sarawak Hidro Sdn Bhd is ahead of schedule. Testing of the turbines was due to start in April, with the first turbine expected to come online in July.

The Misicuni Multipurpose Project is located in the Department of Cochabamba, and it’s objective is to supply the central Cochabamba Valley with potable water, irrigation water and electric power generation for the National Interconnected System (NIS).

The project features a 120m high rock filled and concrete face dam, a 20km tunnel for water diversion (finalized in 2005 with the financial support form the Government of Italy), and a pressurized piping system (from 3.700 to 2.700m asl).

The works for the hydroelectric power plant, including complementary investments such as a substation and a transmission line, estimated in about US$114.1M, will be financed with a loan from the IDB.

A total of $101M in IDB loans will be used to build the hydroelectric component of the Misicuni project, including electric power transmission and related works, which will contribute up to 120MW of power to the national grid. Construction of the dam on the Misicuni River, which began in June 2009, is expected to cost $85M and is being financed by the Government of Italy, the Prefecture of Cochabamba, Bolivia’s National Treasury, and the Andean Development Corporation.