Construction of the prototype of Siemens’ new H class gas turbine is now underway at E.On’s Irsching site in Germany. 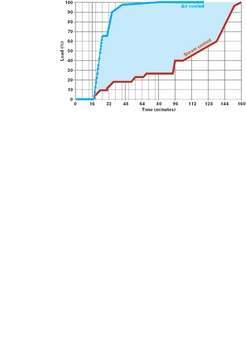 Siemens’ SGT5-8000H gas turbine, rated at 340 MWe in simple cycle and 530 MWe in combined cycle, with efficiency of over 60%, is the result of some years of intensive R&D to evolve an efficient and flexible fully-air-cooled engine competitive with steam cooled competitors, notably GE’s H. It is also the first new frame to be developed since the merger of Siemens and Westinghouse, aiming to combine the best features of those companies’ existing product lines with new advanced technology. After a comprehensive feasibility analysis during the conceptual design phase a fully-air-cooled concept was chosen out of four gas turbine cycle designs and 20 variants of air-cooled engines. Increased operational flexibility was a major driver in the final choice of technology.

• direct scaling for further frames, eg for 60 Hz, is possible.

Among factors contributing to the high efficiency are:

• advanced materials to increase the firing and exhaust gas temperature;

The use of air cooling is expected to bring a number of operational benefits relative to steam cooling, not least of which is that the cooling medium is always present, helping to contribute to fast start-up times. There is also less complexity in engine and plant leading to more flexibility in operation.

Most of the key gas turbine components have already been pre-validated in several sub-system tests, while further key components are currently in sub-system testing for pre-validation. Tests on the new compressor have been in progress at Siemens’ Berlin manufacturing plant in Berlin since January 2005.

Prototype testing, in real power plant conditions, will be carried out on the machine currently being constructed in Germany, Irsching unit 4, under a hosting arrangement with E.ON. Initially the prototype, which will be owned by Siemens and equipped with about 3000 sensors for monitoring, will be tested in simple cycle mode. The aim, says Siemens, is “to ensure that subsequent commercial product lines will be brought to market with an adequate testing history” and commercial release will occur only after successful completion of the prototype testing. After the prototype tests, the simple cycle test plant will be converted into a combined cycle plant with optimised water–steam cycle components and ownership handed over to E.ON.

The construction of the Irsching 4 prototype plant started in mid 2006 and first shipments of components are scheduled to start in early 2007, with the shipment of the gas turbine itself scheduled for spring 2007. The first firing of the engine is planned for late 2007 and completion of the test phase is targeted for mid 2009.

The H class gas turbine will initially target the 50 Hz markets in Asia and Europe. At the outset the engine is being developed for use with natural gas and fuel oil, but operation will be expanded to also include special fuel needed for applications such as IGCC. A geometrically scaled 60Hz SGT6-8000H gas turbine will be released after the 50Hz engine verification.

In addition to the new H class turbine at Irsching, Siemens is also involved in a further combined cycle project at the site, of a more conventional nature. In July 2006 Siemens announced it had won an order from Gemeinschaftskraftwerk Irsching Gmbh (60% E.ON, 25% N-Energie, 15% Mainova) for an 800 MWe 2-on-1 plant, Irsching 5, which is due to enter service at the end of 2008. This will employ two SGT5-4000F gas turbines.

The Irsching site Expected start up times for an all air cooled gas turbines vs those for a steam cooled H class system SGT5-8000H: aiming to combine the best of Westinghhouse and Siemens gas turbine technologies SGT5-8000H combustor experimental assembly at DLR (Germany) The complete SGT5-8000 HPA compressor. This was validated (aerodynamic and mechanical) in the test centre at Berlin SGT5-8000 compressor discs ready for instrumentation (May 2006) Hollow shaft machining for the SGT5-8000H (May 2006) SGT5-8000H turbine vane carrier (May 2006)